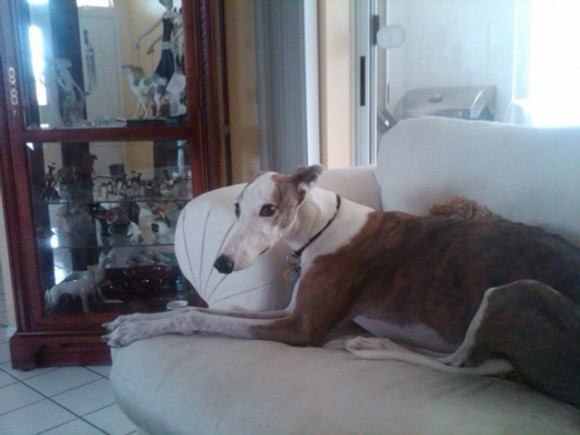 Plato (pictured) is a shy and fearful dog who’s afraid of the dark.  Possibly abused in the past, he oftentimes hides behind or stays close to Bob.

As I rang the doorbell at the well-kept little house of Nancy Quinn, I was greeted by a chorus of “roos” and barks that seemed to come from everywhere and nowhere at once. As the door opened, I was met with the smiling face of the Vice President of Racing Dog Rescue Project (RDRP), an organization dedicated to finding homes for former greyhound racing dogs. As Quinn motioned me inside with a greeting, I was taken to her backyard where I was met with half a dozen beasts that I almost mistook for small horses.

“Sorry about the mess,” Quinn said. I looked around and observed how neat and orderly her house was, despite the fact that six large animals have more or less taken over her home. In every room, I noted greyhound-themed knick-knacks.

As I stepped into the backyard, I was met with licks and hand nudges. In unison, six long and tapered tails began wagging back and forth. This is the greeting of a retired racing dog – the fastest canine in the world.

As I let the dogs smell me, Quinn began identifying and describing each dog in her group. All of them had been taken in by RDRP and she had fostered all of them, adopting three of them by the time I came into the scene. As I began taking photographs of her dogs, I observed the behavior of each one. One brown dog, Tommy, splashed around in a small “kiddie pool” (interesting fact: greyhounds are unable to swim because they have hardly any body fat to help them float).

One dog in particular had a stronger reaction to my presence. Bob, a larger-than-average creature with white fur and red spots, tailed me as I moved around the backyard enclosure. As we walked back inside to ask Quinn some questions about what she does at RDRP, she yelled excitedly, “Go get your baby, Bob! Go get your baby!” The dog ran over to a large teddy bear that looked like it had seen better times, and picked it up and held it in his mouth. He shook it a bit while his tail wagged, and then ran ahead of the rest of the pack as we all assembled back in the house.

“They are probably the easiest breed of dog I’ve owned,” Quinn said, upon sitting down on the armchair in her living room. “They’re very easy to take care of – very low maintenance.”

Looking around the room, it was hard to say otherwise. Reclining on top of six large and plush cushions were six large greyhounds, each looking different from the other. In the two minutes between playing in the back yard, getting inside and investigating me further, and finding individual cushions to rest on, the entire pack had fallen asleep. A common saying about greyhounds is that they’re “45 mile-per-hour couch potatoes,” and I couldn’t agree further.

Kathy, a six-year-old dog with fur that resembled pumpernickel bread (called “brindle” by breeders and dog fanciers), had a small injury on her back right leg. As a result of years of racing, Kathy’s leg had broken her leg on the track.

“Normally, it takes a good eight weeks for a broken leg or hock [ankle] to heal,” Quinn said. “She took a long time because she had a lot of work done on her legs. It took eight months of healing and resting.”

In fact, all of Quinn’s dogs had injuries. Some injuries were as minor as a fracture and others as severe as hookworms. However, and with the help of dedicated caretaking, all of them had healed or were rapidly on the mend.

The career of a greyhound is short-lived, spanning a maximum of five years. Many greyhound racing careers never make it to five years (often two or three) due to the common injuries inherent in the sport. Before the second half of this century, rescue groups did not exist to place these animals into homes, and so were often euthanized. However, with the advent of animal shelters and rescue groups, there exists a wide network of greyhound rescue groups that take in and place those dogs that are unable to continue their careers.

With a success rate of 100 percent, RDRP represents one of the most successful rescue groups. As a no-kill shelter, it takes in any greyhound (no matter how severe their medical issues are) and, through fund-raising, provides all the treatment and care that each individual animal needs. Part of their success can be attributed to their official neutrality on dog-racing, which is controversial in many parts of the country. By withholding any official statement about racing, they are able to work directly with the tracks, and the track-based adoption group, to help place the animals into homes.

“Every track should have an adoption group,” Quinn said.

If readers would like to get involved in volunteering at RDRP or fostering a dog, they are encouraged to visit http://www.rdrp-greyhound.org and contact representatives.