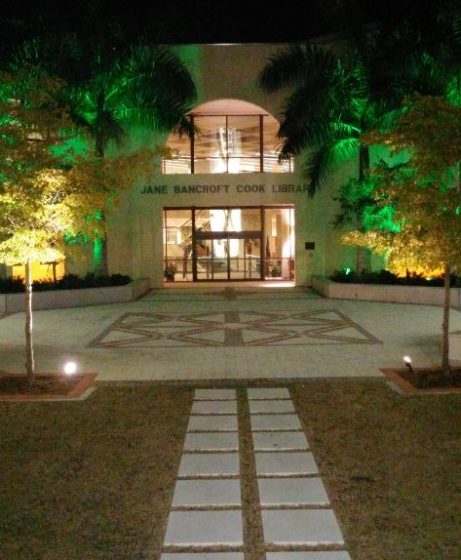 Late night studiers may be treated to another hour or so of library time within the next week or two, depending on whether or not the  New College Student Alliance (NCSA) and the dean of the library can come to an agreement. Newly appointed NCSA co-presidents Paige Pellaton and Shelby Statham are to meet with Brian Doherty, dean of the library, on today to discuss the late night hours that have recently been shortened. While the library was open until 4 a.m. last semester, the library has been closing at 1 a.m. so far this Spring semester, sending many confused late library-goers adrift in the night with only more work to do.

“I am bitter and upset. I want to do more homework,” thesis student Casey Dodge said about being forced from the library so early. “The reason the library is closing early – from what I understand from going to cabinet meetings – is that the person who is in charge of the library demands that we have a security guard to keep the library opened later,” Student Court Counselor Dodge said. Dodge believes that hiring a security guard would not be helpful, stating that “We have a cop shop right around the corner, which is a far more effective security response than somebody with pepper spray.”

“I don’t really see why you would need a security guard, there is a blue light right outside of the library,” agreed first-year Mimi Chaenye. “There are more options than just hiring a security guard.” A frequent late library-goer, Chaenye has been in the library at 12:45 a.m. when a voice over the intercom announces to students that the library will be closing in 15 minutes and that they need to leave the premises.

“A lot of people are complaining about it because it is really screwing with their study habits,” Chaenye said in regards to the situation.

“We started late hours as a pilot project a few years ago – Michael Long was the student body president – and we did it as a test during finals week,” Dean of the Library, Brian Doherty said. “After that we met with Michael and figured out a plan where students would generally fund  other students to come and staff the library during the late-late hours. But now we are moving in the direction of making this as safe of a place as you can.” After the shooting in Florida State University’s library last fall, Doherty insists upon the NCSA funding a security guard. “We had a meeting of all of the deans of the libraries and have begun to come up with some best practices,” Doherty said. “And given our situation, we really need to have that extra layer of security.”

“The security guard is not someone who is going to confront students, or do much of anything except be here to deter anything and to contact the police if the need comes about,” Doherty said. “But we need to have a security guard funded for the extra hour that we understand the students want the library open for. The funding is $15 an hour, so it is not unbelievably expensive.”

With Doherty standing firm in his demand for a security guard, newly appointed co-presidents Paige Pellaton and Shelby Statham are addressing the situation as a student priority. “We are currently working with Dannie Benedi, our Vice President of Relations and Financial Affairs, and our Vice President of Academic Affairs, Kira Rib, and the library head, Brian Doherty, to try to rectify the situation,” Pellaton said. While she would like to get late hours back, the 4 a.m. closing time may be a stretch.

“Largely it does become a budget question, about whether or not the NCSA has the ability to fund those hours,” Pellaton said.

While the library may not stay open until 4 a.m. like it did last semester, progress is being made to get late hours back – even in a limited capacity. With the NCSA having to pay for both the students who staff the library during late night hours and the security guard that Doherty demands, late hours might not be able to stay the same. Progress is being made, however, and a new plan for late library hours might be agreed upon and implemented soon enough.