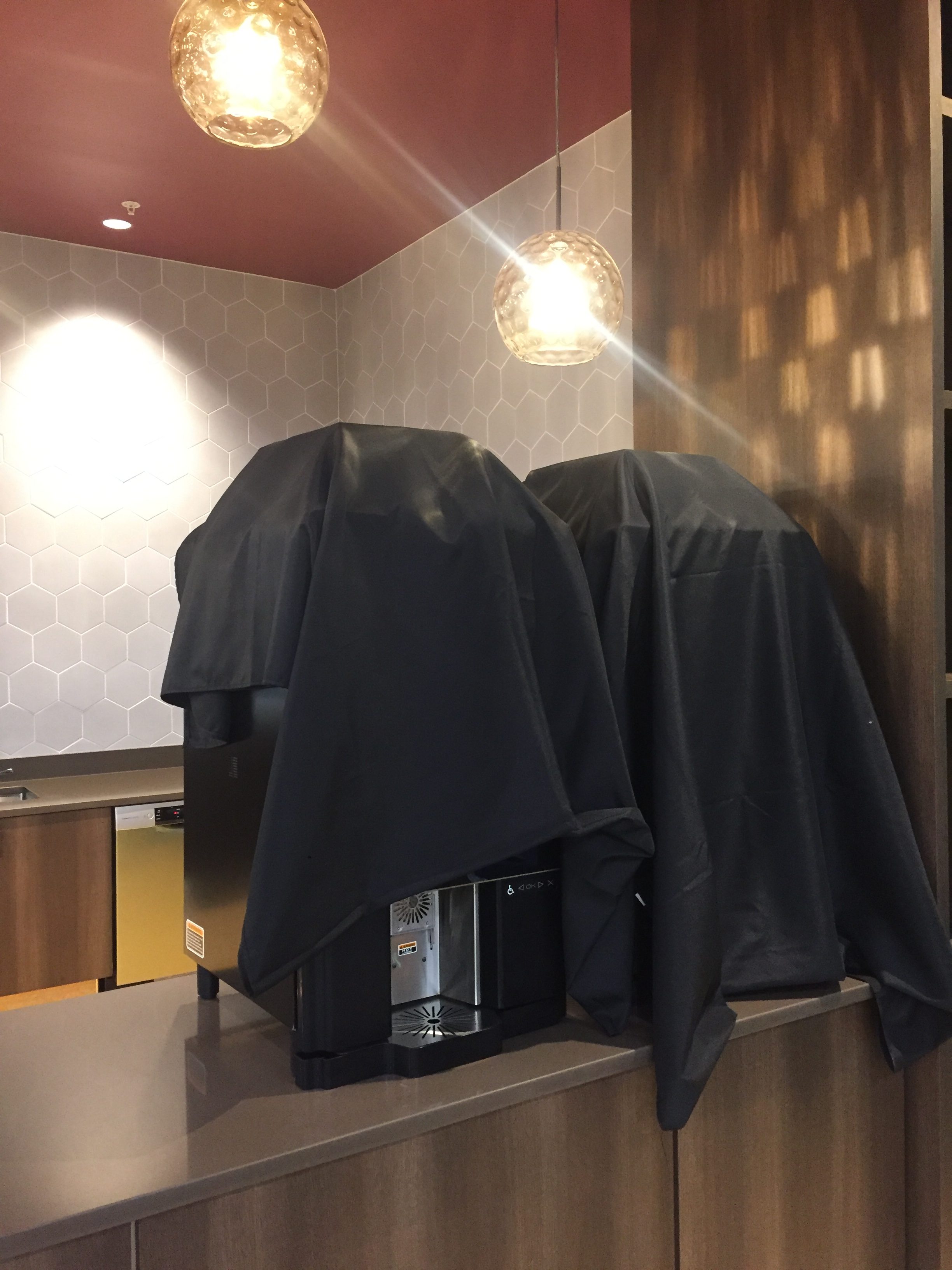 Noah Baslaw/Catalyst The two coffee machines have remained under the back sheet for a few weeks.

The Jane Bancroft Cook Library began offering free coffee from their new Starbucks Serenade™ coffee machines at the café Grand Opening on Sept. 6, 2018. The Library ran the machines for free from 8-10 a.m. and 8 p.m. to midnight on weekdays until the end of fall semester finals week, to the joy of staff, faculty and students. Since then, however, $13,500—funded by donations through the New College Foundation—worth of coffee machine has remained closed for use and sitting under black sheets in the unused café. It is uncertain who will operate the new café bar created in the 2018 summer Library renovations that cost $123,000 from Foundation funds.

“The Library had a sign up saying they will start charging for the coffee after winter break in spring semester, and then that never happened,” second-year and Library Representative on the Council of Academic Affairs (CAA) Adam Johnson said. It is not clear when and in what capacity the café will operate. Johnson is also one of four students who make up the recently formed Student Advisory Committee created by Dean of the Library Brian Doherty. The committee was formed after the “Pizza with the Provost” event on Dec. 2, 2018, hosted by Provost Barbara Feldman, which showed there was student concern over recent Library renovations.

Many students were upset that these expensive coffee machines were supplying what already existed in the Writing Resource Center (WRC) and made the first floor of the Library noisier, according to Johnson.

“It’s silly to have coffee bean grinding going off in the Library at around 8 a.m.,” Johnson said. “There is also the fact that we already had coffee in the WRC that was free. It was just a Keurig, but now we have a really expensive and loud Keurig that still only makes black coffee.” There is also a Mr. Coffee™ pot in the WRC.

A number of factors have postponed the usage and development of the new Library café by depriving sources of personnel for its operation.

Thesis student Rowan Brower said that though she was never officially hired through the school for the position, she was told at the end of last semester that she would have a job working at the coffee shop starting in spring 2019. Before the semester started she was told all funding for the coffee bar had been cut, according to Brower in an email interview.

“The status of the Library café is up in the air because of many things happening around the college, like the Four Winds [closure] and enrollment being a little bit down,” Doherty said. Doherty had hoped that bringing more amenities to the Library would draw in more students and expand the Library to keep tempo with the New College growth plan. From what he gathered from the Student Advisory Committee’s outreach to the student body, Doherty has some immediate and long term plans to have more dedicated quiet areas in the Library.

“We plan to at least put some signage upstairs to mark it as a quiet area,” Doherty said. He said that the Library has received positive feedback from the blue individual study pods, and he hopes to obtain more of those in the future and place them upstairs.

“When we decided to move forward with beginning to revamp the Library,” Doherty said, “the idea of having some sort of café or refreshment was an important one.”

He had been working on involving local vendors for a number of years, but found the size of the New College and University of South Florida Sarasota-Manatee (USF-SM) community is too small to attract corporate franchise interest.

Nonetheless, the issue now is finding the folks to operate the new café, which means that there is still a broad range of services that could be potentially offered.

“What will come out of the Library café depends on the status of the Four Winds and decisions made within the college, the Library and Metz food service,” Doherty said.

The creation of a café is one of many additions that Doherty aims at establishing for the community.

“There has also been some demand for a 3D printer, and the Library plans to acquire more technology for students to be exposed to,” Doherty said.

He is hoping to expand Library hours as the school grows and the Library takes on a broader scope of amenities.

“As long as it brings students into the Library and allows them to stay in there a long time,” Doherty said. “We are open to almost anything.”

The Dean encourages students to use the ‘comment pig’ at the front desk to submit suggestions for the Library to consider in its management of the space.