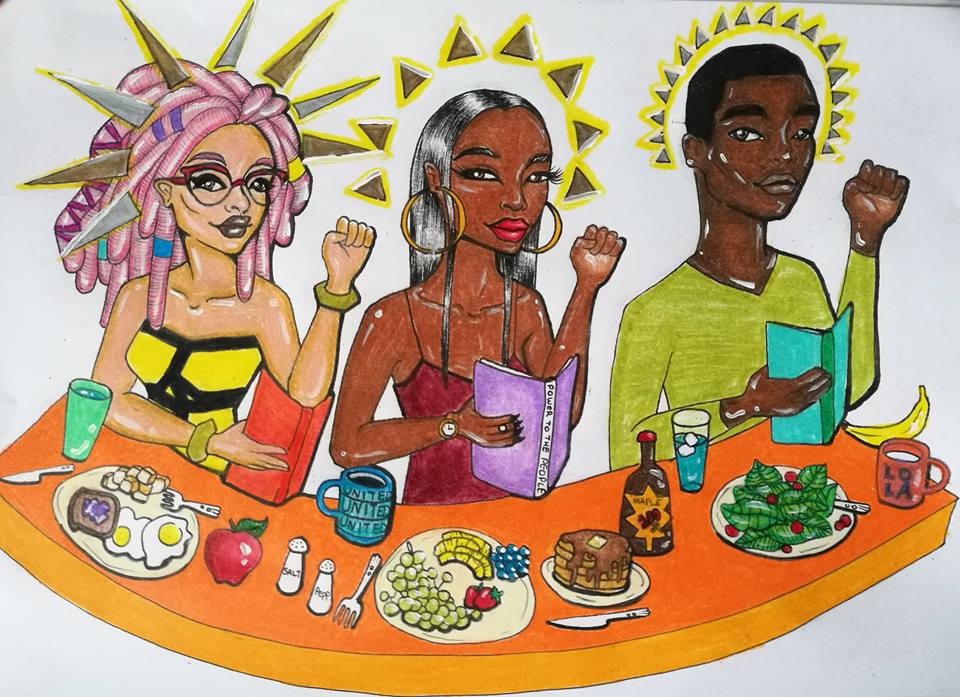 Image courtesy of Lola Whitworth The Liberation Breakfast is held in Newtown on the third Sunday of every month.

On the third Saturday of every month, the Liberation Breakfast is held in Newtown by Answer Suncoast and the Party for Socialism and Liberation (PSL). Professionals, students, activists and community organizers gather together at the Newtown Estates Park to provide free breakfast and literature by authors of color. The books are provided through donations from the group’s Amazon wishlist and cover topics such as Black empowerment, socialism and ways to organize communities against the violence and oppression caused by current U.S. and global power structures. They can be checked out and then exchanged at each breakfast.

“We wanted to get more in touch with the community we’re working with and to have a casual environment to talk,” third-year Lola Whitworth said. Whitworth is an active member of Answer Suncoast and PSL and one of the breakfast’s founders.

Most PSL events are protests and speak-outs. However, Ryan Francis, a student from University of Central Florida (UCF) and a member of PSL and Answer Suncoast, added that PSL also hosts public forums to discuss struggles faced by the working class. Another recent PSL event was a speak-out for transgender rights at a Sarasota School Board meeting on Sept. 4.

Each month, a new topic is discussed by leaders in the community. Last month, the issue was the school-to-prison pipeline and the rising number of police in school settings. This past Saturday, on Sept. 15, the topic was the recent American prison strike. Three speakers addressed different aspects of the strike and what it meant for the Party’s own goals. The strike started Aug. 21, 2018 and ended on Sept. 9, 2018. It was the largest strike of its kind in U.S. history.

“Inmate protests have been happening for generations, but it is only in the last few years that organizers have had success coordinating from penitentiary to penitentiary and state to state,” the New York Times reported. According to information released by SBS, the U.S. has more correctional facilities than any other country on Earth, housing almost a quarter of the world’s prison population while only containing five percent of the world’s population.

The main demands of the inmates were better pay and an improved quality of life. Most inmates get paid only a few cents per hour, wages that some have called “slave labor.” Whitworth, one of the speakers, also listed the other reasons for the strike, including the inhumane treatment of prisoners, the dangers of privatized prisons and the unfair sentencing of people who committed nonviolent crimes. The group discussed the “Lockup Quotas,” of private prisons. These quotas set quantitative goals for the number of prisoners, which can result in the promotion of mandatory minimum sentencing in order to increase profits. Members also discussed the stigma around incarcerated individuals and the ways such stigmatization allows for the dehumanizing treatment of imprisoned individuals to go unchecked by most of society.

The final note that the speakers left on was the fact that many famous social organizers, “political prisoners,” have been imprisoned, some in solitary, for decades.

“We have to stop being afraid of critiquing our own country,” Whitworth said.

She hopes to raise awareness of social injustice on campus with the Revolutionary Socialist Club. Her goal is to connect New College students with activist groups outside of campus so they can stay involved after they leave campus.

The inmates’ list of demands, as well as ways to help and get involved, can be found on this website: https://incarceratedworkers.org/campaigns/prison-strike-2018. The PSL Amazon book wish list can be found here: https://www.amazon.com/gp/aw/ls/ref=cm_sw_r_cp_ep_ws_qvYBBbC0J0KXP?ie=UTF8&lid=1I2K92HUNPKJ2&ref_=cm_sw_r_cp_ep_ws_qvYBBbC0J0KXP&ty=wishlist.