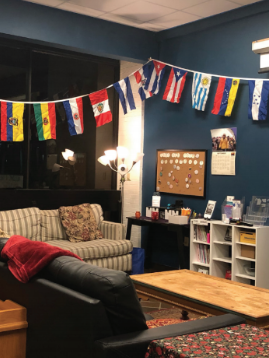 In honor of LatinX heritage month, the Student Activities and Campus Engagement office (SA[u]CE), in collaboration with the LatinX leadership club, is organizing a LatinX culture fair on Sunday Oct. 6. The culture fair will have student-run booths, selling traditional dishes from students’ respective countries. Second-year student and SA[u]CE worker Gabriela Ott is the main organizer for the culture fair and is looking to encourage students to come out and expand their knowledge of all the different LatinX cultures present on campus.

“We’re having our LatinX heritage month culture fair, so the culture fair is going to have music [and] free dance lessons,” Ott said. “Students are going to be able to run their own booths and sell food. We’re going to have some traditional toys and clothing so it’s gonna be a big mix of LatinX culture.”

The LatinX community on campus is far from a small one. According to the 2017-2018 New College fact book 17.7 percent of students enrolled at New College were of “Hispanic” heritage. With a sizable presence on campus, the cultural fair will offer all students the opportunity to not only learn about diverse cultures but to learn more about their cohorts as well.

“I think giving any student any opportunity to increase your culture confidence to get to know your peers better to save space, to learn and grow together is an incredible opportunity and to do that through music, food and art and something that is so visual,” Ott said. “It’s kind of a casual thing you can walk around and experience it with your peers. I think that’s a great opportunity for anyone who might not know as much about the Latin community.”

When it comes to music, students can look forward to hearing a playlist of traditional Latin music and modern LatinX pop. Third year student and main booth organizer Marcela Prado Zapata will be in charge of the playlist and is taking suggestions from student run booths to have music that represents the LatinX community as a whole. SA[u]CE will also be offering free dance Salsa and Bachata dance classes for students looking to learn some new moves.

“I’m requesting songs from the people who are participating in the culture fair,” Zapata said. “I’m a reggaetonera so I like a lot of reggaeton. I’ll be playing some classics, LatinX icons like Selena and Celia Cruz for sure. Definitely gonna put in some Brazilian music,”

The LatinX culture fair will be the second to last event planned for LatinX heritage month with the final event being a panel on LatinX identity in the workplace on Oct. 8.

“Sometimes it can feel like we don’t have a lot of visibility on campus, so having a space where we can celebrate the diversity within our community, the differences within our community all together and experience different cultures together is really really important to have that kind of safe opportunity to show that at New College,” Ott said.