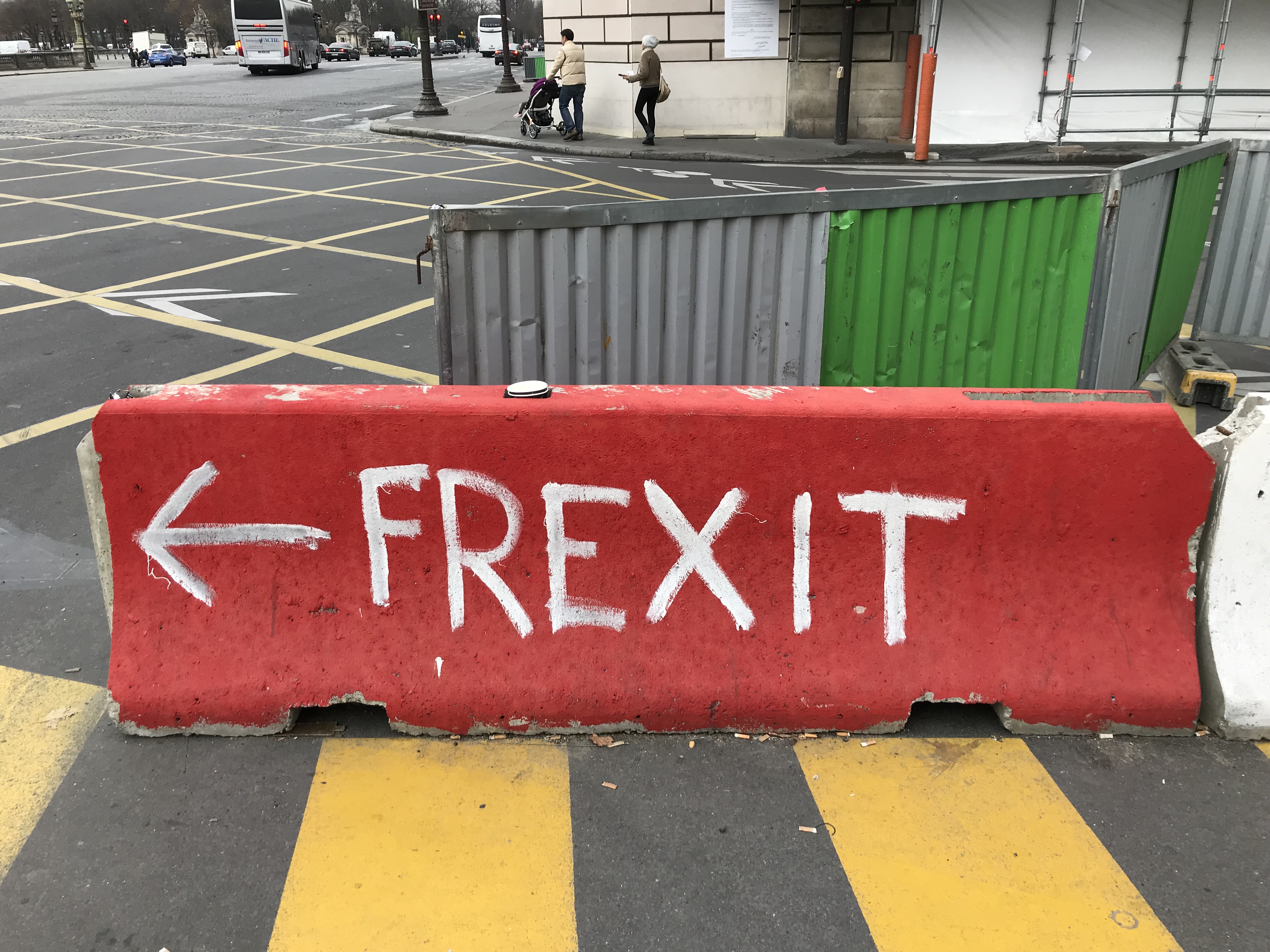 Graffiti outside of the Jardin de Tuileries promoting the French exit from the EU.

France, like most Western nations, has had issues with assimilating and adapting to a large immigrant population. Europe, more than the United States, has been generally homogenous within national boundaries for much of its history. When immigration from southern Europe increased in the 30s and 40s with the rise of fascism, the similar complexions and shared Catholic backgrounds of these immigrants made assimilation and acceptance easier. The current wave of immigrants tends to diverge from the accepted European standards of complexion and religious orientation and brings with them a diverse range of cultural values and practices that do not always meet France’s rather stringent definition of what is and is not “French.”

France’s position on racism also raises some interesting questions on how the nation should best deal with an increasingly diverse population. During a campaign speech for the 2012 French presidential election (which he won), François Hollande said : « La République ne craint pas la diversité. La diversité, c’est le mouvement, c’est la vie, [mais] il n’y a pas de diversité des races […] Il n’y a pas de place dans la République pour la race. Et c’est pourquoi je demanderai au lendemain de la présidentielle au Parlement de supprimer le mot race de notre Constitution. » (The République is not afraid of diversity. Diversity is action, it’s life, [but] there is not diversity of races […] There is not a place in the République for race. And that’s why, tomorrow, I will ask the president of the Parliament to take out the word race from our constitution.)

It is commonplace for French individuals to deny that race exists in France, as la race implies difference where there should be none if all who live in France are truly “French.” French law forbids the collection of data relating to race, ethnicity or religion, as the historically nationalist view has been that in choosing to become French one chooses to give up one’s previous cultural and ethnic ties in favor of their new French ones. But not all immigrants who move to France are doing it out of a Sartrean conception of libre arbitre and a desire to become “French.” Increasingly large numbers of immigrants have been forced to leave their homes due to violence and deteriorating economic conditions and are actually not all that interested in assimilating into the French model of le citoyen.

While race may be a social construct, the discrimination, prejudice and violence faced daily by a large part of the population are not conceptual constructs but tangible experiences. In order to overcome the damage done by socially constructed norms, those norms must first be acknowledged and then actively worked against. Removing the word race from the political and daily vocabulary seems to further ignore the problem instead of accepting responsibility for institutionalized discrimination and injustice and attempting to begin to correct the damage done by centuries of racism.