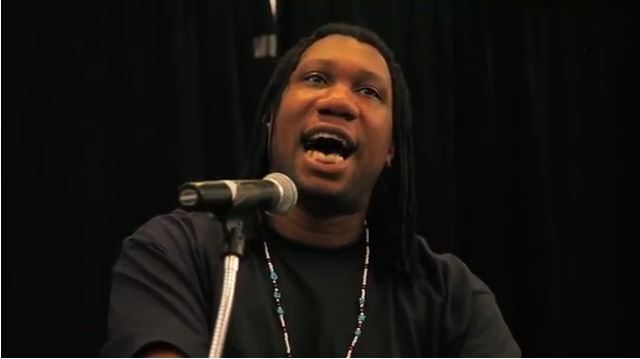 KRS-One is a prolific EMCee, hip-hop producer and public speaker. Lawrence Parker is his birth name. As a childhood resident of the Bronx in the 70s, Parker was a part of the first moments of hip-hop, and he has made it a point to explicitly talk to audiences about the history and deep ramifications of the culture his generation forged. His articulations allow diverse crowds of people the opportunity to consider both our world’s current limitations and abilities, together. For KRS-One, hip-hop is human glue, forged with love, which these modern times of social discohesion need.

In 2014, Parker spoke at a California State, Los Angeles’ (CSULA) Black History Month keynote presentation. He began by asking the audience, “What is hip-hop?”

“When we say the word hip-hop, we are talking about, breaking, EMCeeing, graffiti writing, deejaying. These are called the the four core elements of hip-hop. The reason why we do breaking, emceeing, graffiti writing, deejaying is to cause peace, love, unity and safely having fun. This is the reason why we did it originally. We were growing up in the 70s at a time where our self expression was being ignored by the mainstream.

“We weren’t in television, we were nowhere in magazines, nowhere in media, nowhere in education, nowhere in even justice and things like medicine. What you see today-hip-hop is everywhere-imagine the complete opposite in 1973, hip-hop is nowhere.

“In fact the name hip-hop is like me saying to you today, ‘gobble-gah’. They’d say what are you doing?-‘gabble gah,’” Parker said.

The audience laughed and Parker retorted back, “And the same way you reacted was the same way the mainstream reacted to us when we were spinning on our head [or] hittin’ up the trains. Wait let me slow down, for those who aren’t bilingual,” Parker explained. “We are spraying graffiti with spray cans on the sides of trains, in New York City… We used to go to the train yard and put our names up on the side of the train–then the next day you see you name go by. This was the cultural competition which we called aerosol art, mainstream called it graffiti art.

He talked later about the importance to speak in slang, which pushes the english language in the unique individual or community’s direction. Words shape our perception of reality, Parker claims, and we must take responsibility of our own perspective.

The audience continued to listen with Parker’s recollection of the first hip-hop party by Deejay Kool Herc, which was for his sister, Cindy’s birthday.

“On Cindy’s birthday, she asked Clyde to Deejay her party-Clyde was a graffiti writer. They lived at 1520 Sedgwick Avenue in the Bronx. There was a community center there. They rented it out,” Parker illuminated.

When Clyde realized he was going to deejay a party, he changed from his tagger name ‘Cool Ass Clyde’ to Kool Deejay Herc, short for Hercules because he was big.

“What he would do is take James Brown records, specifically, and this other record called ‘Apache’ by the Amazing Bongo Band–and he would just play the the breaks of these records over-and-over-and-over again, in this style he called ‘the merry go-round,’” Parker recalls. He points out Clyde’s Jamaican origin carried deejaying styles that incorporated instrumental breaks and freestyling.

Parker also admits he was unable to go the first party because he was too young and the 25 cent entrance fee was too steep, though he lived across the street at 1600 Sedgwick Avenue.

“I could see his building from my window,” Parker mentioned.

Kool Herc started doing the parties every weekend and he eventually had to move them outside, where kids like Lawrence Parker could finally join.

Parker reminded the audience about the extreme inability to be an African American professional laborer in the 70s. Parker also notes the affect urban decay had on his community but also recalls how the light of hip-hop was brought by those who created something new to give to their community.

Kool Herc and Afrika Bambaataa played the breaks of records, but they only used one record player and they did not scratch for the audience to hear when they queued up the break. Grandmaster Flash was a professional electrician and created a cross fader out of a mic toggle switch, which he used to scratch and cut two records at the same time, allowing a continuous drum break. But now imagine this, no one on the planet is doing this, I am going to give you a minute to meditate on that. There’s this guy, he invents [the cross-fader mixer], he is the first, what does he do? He says I am going to give this freely to all the kids in the neighborhood so they can have the skills and become somebody. To this day Grandmaster Flash has not received one patent,” Parker recalled. “Every cross fader you see on a mixer is Grandmaster Flash’s’ idea.

“But it was him that said it at the beginning, ‘this is what hip-hop needs, these little kids running around,’ this is what his inspiration was-give it to the community,” Parker explained.

Desperation, Big-Money and your soul

At the early hip-hop parties, “dudes would just come out and give their soul. That soul got captured by the contract. When you are selling your art, you are selling your soul… Artists need to sell their art to live and eat, so be very careful when you sell portions of your soul,” Parker warned.

“The soul is infinite, you have a lot of soul to give-but the soul has rules. The rule of the soul is: whatever the soul touches, touches it. So whatever you sell your soul to make sure you wanna touch it. Make sure you want that a part of your life, not your month, week, or day, but life. Most of us looked at it like this from the early days,” Parker continued later saying. “Value is not based on what you own or what you have… Real value is based on what you can do without.”

Two hours is quite a commitment in our fast paced world. KRS-One’s lecture at CSULA was, however, worth each minute. His expressions are contagious and his themes are vast, only a fraction of it was illuminated here.

Mainstream society centers around greed, narcissism, contracts and domination, while original core hip-hop wisdom teaches peace, love, unity and safely having fun. There are many aspects of society which alienate ourselves from ourselves and others. The procrustean-or one-size-fits-all- dogma, perpetrated by the societal superstructure, is inherently numbing. This distinction allows most human beings to see the limitations of mainstream society and the vast potential for people progress, which KRS-One speaks on.