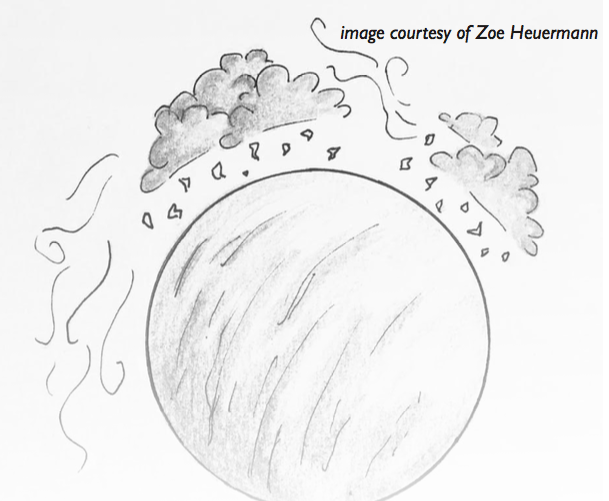 ‘Galaxy of Horrors’ planet HD 18733b has storms of molten glass

Rains of molten glass and winds that could gust at temperatures up to seven times faster than the speed of sound made the planet HD 189733b  deserving of it’s spot on the National Aeronautics and Space Administration (NASA)’s 2016  list of Galaxy of Horrors this November.

HD 189733b is an extrasolar planet approximately 63 light years away from our solar system in the galaxy of  Vulpecula. It was discovered in 2005, and is believed to be about 13 percent larger than Jupiter and orbits its sun as a speed of 2.2 days per year.

HD 189733b was the first planet to have it’s color mapped by polarimetry, the measurement and interpretation of the polarization of transverse waves. The blue color of the planet was discovered to not be the actual color but an effect of Rayleigh scattering instead.

Rayleigh Scattering is the scattering of , electromagnetic light, in this case by particles much smaller than the wavelength of the radiation. This is the same effect that causes the sky to look blue, and seem red in the afternoon as the sun sets.

HD 189733 is listed on NASA’s Exoplanet Exploration list of Galaxy’s of Horrors this Halloween season not because of it’s significance to the scientific community though. While it might look quite beautiful and seem like it may contain water, HD 18933b is actually quite scary. The seemingly peaceful blue planet has storms where it rains molten glass … sideways and  winds of up to 5,400 miles per hour which can gust at up to seven times the speed of sound.

While in comparison to the earth it is in almost the same position, which can be seen on NASA’s exoplanet exploration website which allows you to compare HD 18933 b to earth it is not suitable for life by any means, and despite it’s seemingly blue color does not contain any water.

Information for this article was taken from NASA.gov

The mystery of Europe’s Schiaparelli probe was solved on Tuesday when and image of it crash landing against the surface of Mars was captured by the National Aeronautic Space Administration’s (NASA) Mars reconnaissance orbiter.

The Schiaparelli probe, had it not been destroyed upon impact with our neighboring planet, would have been the first European probe to land on Mars. After the the British-led Beagle 2 lander made contact with the surface in 2003 but failed to phone home due to a problem that occurred during touchdown.

NASA suspects that the probe’s parachute failed and it’s landing gear was inefficient however, it remains up for investigation as NASA looks into the causes for the collision.

However the European Space Agency (ESA) announced that the probe collected at least 80% of the intended data before it crash landed against the surface of Mars. ESA scientists are currently going through that data.

The investigation into the probe’s crash landing is expected to produce results by mid-November.

Information for this article was taken from spaceflightnow.org