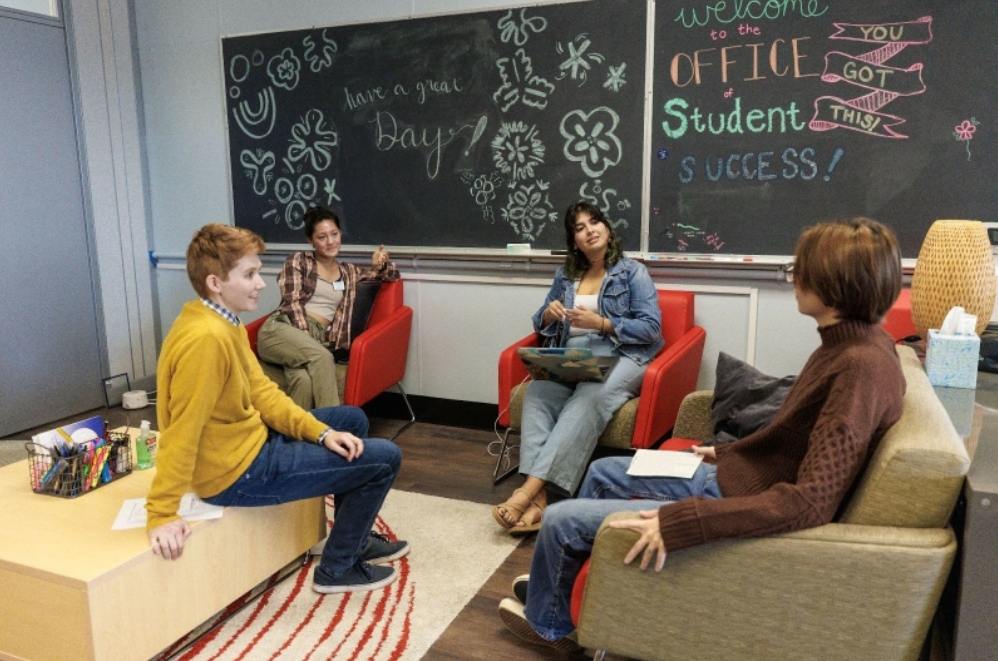 The end of this semester marks Kaylie Stokes’ last day as a full-time employee as the Associate Director of Student Success. As a New College alum of Social Sciences and a beloved New College staff member, Stokes maintained many positions during her time as a student and beyond graduation. Her contribution to the college has been deemed irreplaceable by colleagues who have watched Stokes transition from an ambitious student into a fully-fledged staff member dedicated to assisting and working with students wherever she can.

Stokes’ journey at New College began with a crucial decision: University of Florida (UF) or New College? With the tuition deposit already paid for UF, Stokes made up her mind. It wasn’t until a backpacking trip throughout Europe that she realized New College was the right place for the type of student she aspired to be.

“I had this pit in my stomach like, ‘I’ve made the wrong decision,’” Stokes explained. “I had an opportunity to go to this cool school that did everything so differently and it really called to me as a learner.

New College, ever so lenient with deadlines, had Stokes enroll that same summer.

“From the second I stepped foot on campus I never looked back,” Stokes continued. “I knew this was the place for me, I love being here. I felt really comfortable here, it provided a really welcoming community. I loved my experience as a student, I loved the academics, I loved my social life here. I got really involved.”

As a student, Stokes went on to maintain many on-campus positions: staff writer and Editor of the Catalyst, resident advisor (RA), orientation leader (OL), teaching assistant (TA) and student ambassador to name a few.

“I always joke that I came to New College for the academics, but it was everything outside the classroom that kind of helped me figure out what I wanted to do,” Stokes laughed.

Despite the jokes, Stokes’ academic performance remains highly praised by those that followed her through her time at New College.

“If we had grades, Kaylie’s would be A+ across the board,” raved Professor of Anthropology and Catalyst faculty sponsor Maria Vesperi, who was also Stokes’ contract advisor from 2013 to 2016.

Vesperi was there for most points in Stokes’ academic career—guiding her as the Photo, Managing and General Editor in the Catalyst, as a student in Anthropology courses and serving on her baccalaureate committee.

“Working with Kaylie was always a positive experience,” Vesperi elucidated. “She had a special twinkle in her eye, even when—perhaps especially when—there was a problem to solve. I was always happy when I got to campus for office hours and she was in the group waiting around in that dingy little upstairs corridor in College Hall. Really brightening things up!”

“Kaylie’s thesis was an oral history of the African American community in Boca Grande,” Professor on Anthropology and Stokes’ thesis sponsor Erin Dean explained. “She interviewed a woman from this community as part of the Sarasota Oral History project and tutorial, and she became fascinated by this relatively unknown part of the community’s history. Her thesis work made a significant contribution to documenting this local history, and it has been of ongoing importance in Boca Grande. In fact, she gave a very well-attended talk last year for the Historical Society on this work.”

“Writing my thesis was one of my favorite things I did at New College,” Stokes recalled. “It was challenging but it was actually an enjoyable experience, part of it is looking back on it with some rose-colored glasses, but it pushed me in really meaningful ways. It helped me feel very capable by the end of it. It taught me a lot of skill sets I still use today.”

After graduating from New College in 2016, Stokes moved to North Carolina and worked as a barista, traveling throughout the country as well.

“I knew that I wanted to work in Student Affairs,” Stokes said. “I was pretty involved as a student and realized, ‘This is kind of cool, there’s a career where you can work on a college campus.’ So I knew I wanted to do that.”

As a friend of hers was leaving the position of Residence Hall Director, Stokes noticed the opportunity and thus started her journey as a staff member at New College.

Stokes wanted to make sure of her commitment to working with people—especially college students—and so she became a part of the local nonprofit organization Forty Carrots Family Center, dedicated to serving low-income families by providing low-cost or free counseling services, parenting classes and preschool programs.

“I really missed working with students and so I was eager to come back,” Stokes added. “They let me know that they were hiring for this role so I jumped on the opportunity and I’ve been in this position for about three years.”

Her journey began ten years ago as a first-year looking for an academically challenging and community-driven campus. While finding that, she went on to extend her possibilities, becoming engaged and close with community members outside of the New College bubble.

Stokes will be staying at New College as a part-time employee through June, with less hours per week through July to September to ensure that 2022 Orientation runs smoothly and in order to train the new Director of Student Success to acclimate them to the New College community.

“My job brings me a lot of joy,” Stokes reminisced. “I feel challenged by it, I feel fulfilled by it. I love working with students and I love New College. So it was a very hard decision, it took me a long time to figure out what I wanted to do.”

“It has been wonderful to work with Kaylie as a colleague over the past few years and see how she has translated her experiences as a student and her professional skills into helping current students and shaping projects in Student Affairs,” Dean described. “Kaylie is so talented, and she will be successful with whatever she chooses to pursue, but losing her experience, her perspective and especially her belief in the potential of New College is truly sad for the college.”

Stokes’ next steps consist of traveling to Peru with her brothers, traveling to Ecuador with her wife and catching up on house projects. Then the work begins again at the family business.

To end this article with some words of wisdom from Stokes to students entering the workforce, whether at New College or elsewhere:

“You’re going to spend a lot of your time being at work, so find something that incorporates not only your strengths, but also the things you just really enjoy and find fulfilling,” Stokes remarked. “For me I knew I wanted a job that, one, let me work with people. And, two, let me kind of be a creative problem solver and not just doing the same kind of thing everyday. No two days at New College have ever been the same.”