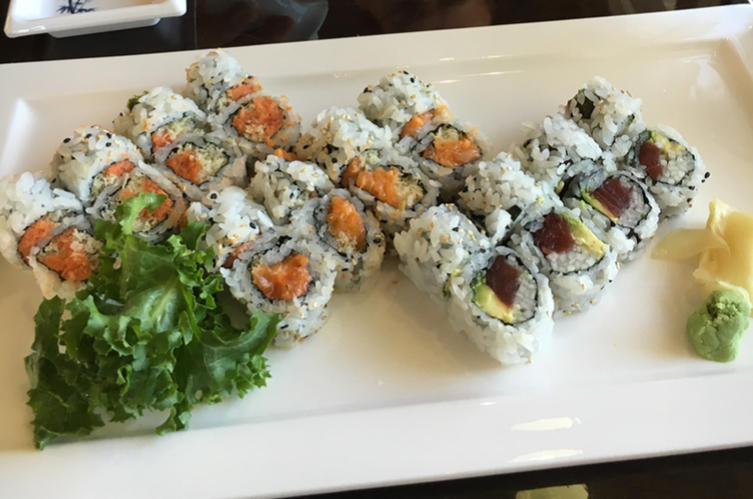 Kasa Sushi opened up this last Wednesday, Nov. 16, making it the closest place to grab sushi near campus unless Sushi Bros ever returns. The new spot replaces Queen of Sheba, a well-loved Ethiopian restaurant that unfortunately closed earlier this year.

The location remained empty for the last few months, until just a few weeks ago the new signs for Kasa Sushi were put up on the property, announcing that the Japanese restaurant would be coming soon. In the days leading up to the grand opening, cardboard signs in the window gave us a countdown to Wednesday afternoon, when Kasa opened its doors to the public with a full menu.

I checked it out with my partner on Thursday afternoon for an early dinner. The decor is upscale casual, with leather chairs and white table cloths. The location is rather small, however, lending to a comfortable vibe. For the first few minutes, we were the only customers in the restaurant. As such, the waitstaff were ultra attentive – a feature that continued even as more customers arrived. Expect frequent check-ups from the waitresses asking how you’re doing.

My partner and I each ordered sushi entrees that come with miso soup and a salad, which is always my preferred way to begin a sushi dinner. I ordered a spicy combo, which came with a crab roll, a tuna roll and a salmon roll. He ordered a combo which came with a traditional tuna roll and multiple pieces of nigiri. All the sushi was perfectly fresh, especially the nigiri, and in decent portions. For $17 a person, you’ll be having a feast.

If you’re trying to stick closer to the $12 range, you could easily do so by ordering two rolls of sushi and maybe adding a bowl of miso soup. Go for lunch and you can get three rolls, soup and salad for $12.50. Kasa definitely offers options for a range of budgets that’ll leave you full and content.

Every table receives a free dish of edamame to snack on while waiting for their sushi, though this may be for a limited time.

Kasa also does hibachi, and sells a number of other traditional Japanese foods beyond sushi. Their more expensive sushi rolls and entrees all looked beautifully displayed – it’s certainly the type of place where you’ll be staring down other people’s orders as the waitstaff brings them out.

Kasa is so close to campus that there’s truly no need to head downtown for decent sushi, but it’s good enough in its own right that it would be worth checking out even if it weren’t bikeable through the Bayshore neighborhoods.