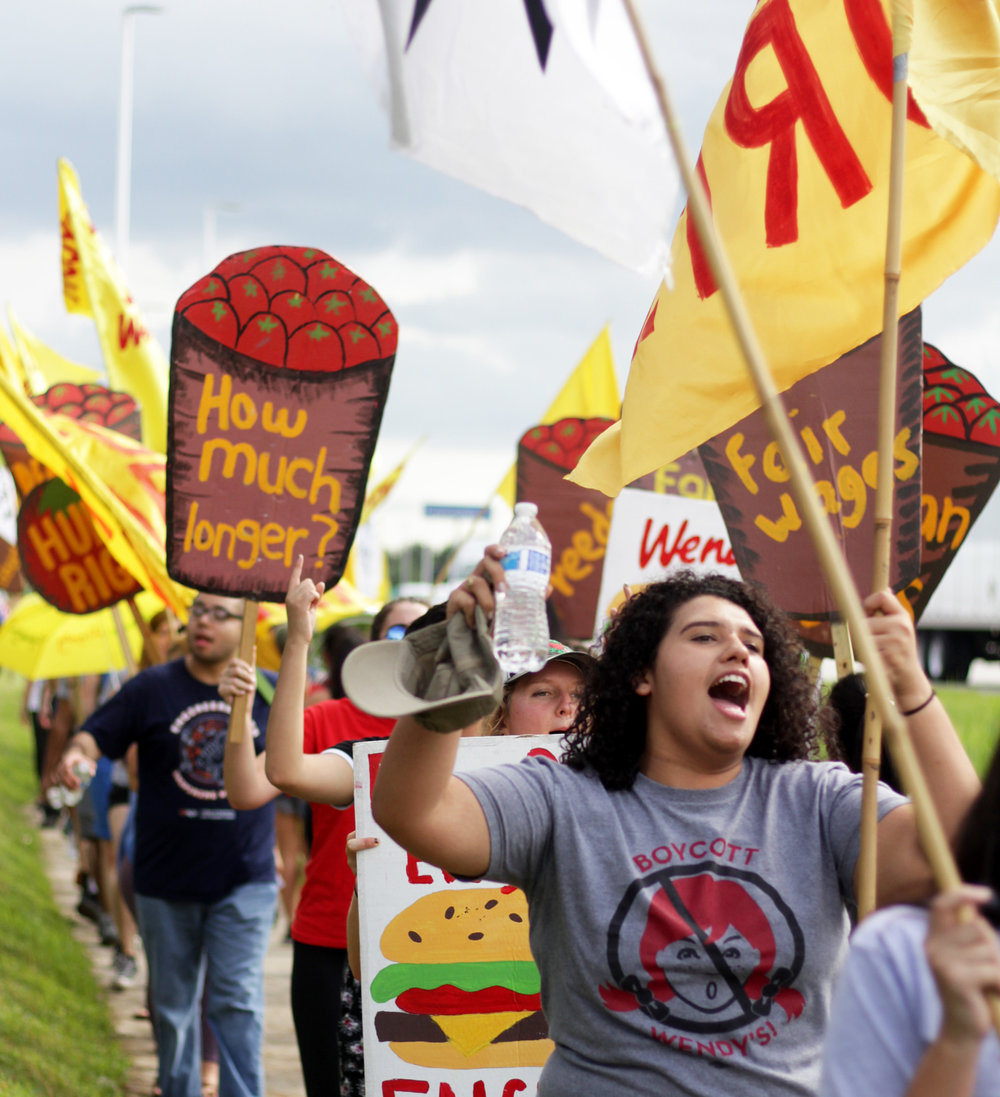 Each fall, the annual Encuentro takes place in Immokalee, Florida. Coordinated by the Student Farmworker Alliance (SFA), Encuentro is a gathering of students and organizations from around the country who come to learn about ways to organize protests in their communities and campuses. This year, it took place from Sept. 20 to Sept. 23. This Encuentro was special because 2018 marks the 25th year of the original Coalition of Immokalee Workers (CIW) protest for human rights. The SFA joined the movement in the early 2000s. This year’s Encuentro theme was Hasta la Raíz (Down to the Root), reflecting on the history of the CIW, the SFA and individual participants.

There are many reasons why students get involved with this campaign. Ximena Pedroza (‘15), SFA intern and past New College student said, “I am involved because the Coalition is changing a system that was rooted in slavery, from its core unlike anything before. I’m involved because I have heard from farmworkers how their working conditions have changed dramatically: no more wage theft, access to water and bathrooms, no more slavery or sexual violence and more in farms that are part of the Fair Food Program.”

During Encuentro, discussions were mainly group-based and strategies for organizing followed a horizontal power structure where each opinion was of equal value regardless of age or education.

“We learned from each other, which is so rare in our current education system of just being talked at and understanding that education is just coming from a professor or somebody with a bunch of degrees,” Bianca Olivares, an SFA member, said. “It’s not like that here. The knowledge comes from everybody and you’re respected.”

The CIW and its three ally organizations, Just Harvest USA, Interfaith Action of Southwest Florida (IA) and the SFA, are fighting to implement the Fair Food Program (FFP) in the agriculture industry. This industry consists of the farms that grow produce, the workers who harvest the produce and the companies who buy the produce for consumers. The FFP is focused on tomato farms for now, but is starting to expand to other produce and food industries, starting with strawberries in Florida. McDonald’s, Trader Joe’s, Walmart and other large corporations have signed on to the FFP. The entire list can be found on the CIW website. Joining the program means corporations can only buy tomatoes from farms approved by the FFP. The program was designed to protect the rights of farmworkers through close inspections of working conditions, educating workers on their rights, a 24/7 complaint hotline and zero tolerance for sexual violence. The program is unique because it was created by farmworkers and not an outside source, such as a lawyer. Many corporations have signed this contract when pressured by their consumer population.

According to the CIW, the campaign for fair food “educates consumers on the issue of farm labor exploitation—its causes and solutions—and forges alliances between farmworkers and consumers in an effort to enlist the market power of major corporate buyers to help end that exploitation.”

Encuentro is part of this consumer education. It consisted of three days of workshops, a protest supporting the CIW’s Wendy’s boycott and community building to improve national communication between students and organizers for the movement. Some of the workshops covered topics such as how to start an SFA chapter at a college, interacting with the press at a protest and different avenues of educating one’s community (such as theatre performances or classroom teach-ins) about the Campaign for Fair Food.

“It’s an opportunity to bring students together [from] all across the country and [from] different universities and strategize how they can support the campaign for fair food,” Nely Rodriguez, a member of the CIW, said through a translator.

Concepts such as justice not charity and what it means to be in solidarity with someone were central themes of each workshop. SFA and CIW members commented on how the movement, through consciousness and commitment, can enact real change. This model of committed, consistent action has won the fight for fair food in past boycotts, such as the one against Taco Bell in the early 2000s.

Rodriguez’s hope for Encuentro is to raise awareness of not only the movement, but the power that students have to move the campaign forward.

“For as long as the campaign for fair food has existed the will of this movement has been led by farmworkers,” Rodriguez said. “But it hasn’t only been farmworkers, it’s been with the support of students and other communities getting together to really bring these corporations to understand and accept the responsibility that they have for the conditions in their supply chains.”

Currently, the campaign is leading boycotts against Wendy’s and Publix, two corporations who have refused to join the FFP. Within the Wendy’s boycott, there is an emphasis to get universities to cut their contracts with Wendy’s establishments on campus. The university component of the boycott is called “Boot the Braids,” an echo of the past university boycott of Taco Bell called “Boot the Bell.”

In the past, New College’s Students Targeting Oppressive Powers (STOP) has worked closely with the SFA and the CIW. However, the club has yet to meet this year and did not have a booth at club fair. This has not always been the case with New College students and the SFA.

Students interested in getting more involved can look out for more information on next year’s Encuentro, join STOP and research internships in Immokalee for SFA members.

Leavengood received funding from the Council of Academic Affairs (CAA) to attend the 2018 Encuentro. The application for Encuentro is sent by the SFA and the registration fee is on a sliding scale donation basis, from $75 to $300 per attendee for food and housing.