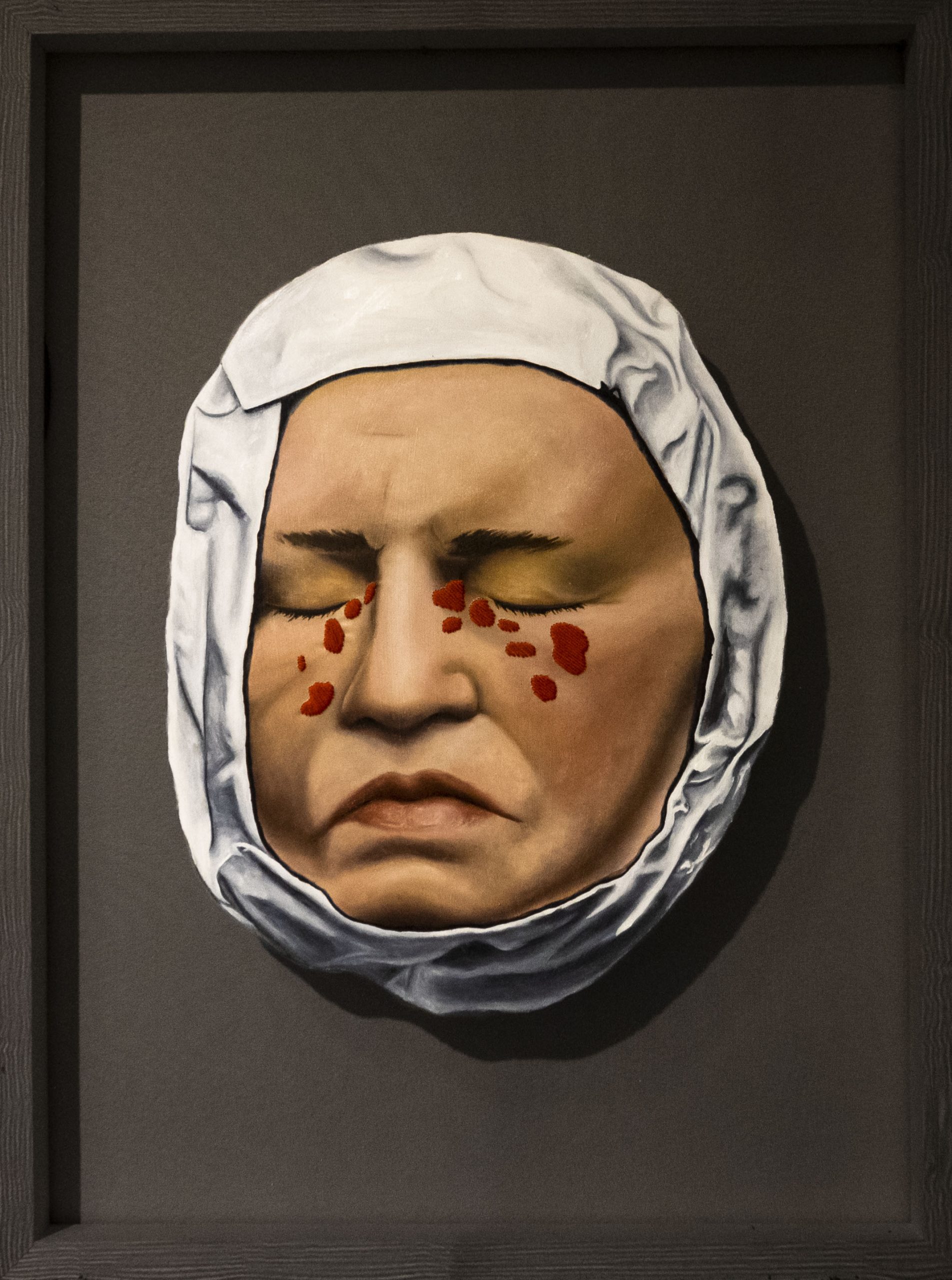 The Juried Art Show is a yearly event that allows students to present their original artwork in front of a juror, with hopes of selling their artwork to New College to adorn the walls of Hamilton Center. This year’s exhibition saw a variety of works ranging from “The Red Girl,” a pastel on paper painting, to “Shit Wagon,” an elaborate contraption consisting of welded steel, wood and miscellany. The reception occurred on Feb. 6 and the exhibition will remain on display until March 13 in the Isermann gallery in the Caples Fine Arts Complex, giving students plenty of time to admire the work of their peers.

Head in the Clouds

A single fluffy white cloud floats in the corner of the dimly lit Isermann gallery. Covered in string lights and combined with cascading snowflakes, the cloud radiates a warm glow reminiscent of a snowy winter day. Standing beneath the cloud; a new dimension is added to the piece, as a hole on the bottom of the cloud acts as a portal to another world. Inside, the cloud is lined with mirrors on all sides with a disco light to illuminate the reflections of self within the cloud. Created by second-year Autumn Schwers, “Head in the Clouds” sits on a metal frame, the cloud itself is made up of poly-fil material with acrylic glass and mirrors lining the inside.

“Shit Wagon” looks like it came straight out of a Mad Max movie. The appropriately named wagon consists of just that, shit, as the piece was constructed out of welded steel, wood and other found objects. The work resembles a handcar, a railroad car that is powered by the passengers as they use the walking beam to propel the car forward. Created by second-years Clayton Bauldree and Gabriel Sabol, the wagon was originally used in the Parking Lot Regatta in December, where it was originally called “Anarchy.” The piece itself carries an intimidating presence, with a rusty colored grate and spikes on the front and sides of the body; “Shit Wagon” looks about ready to hit the fury road.

“Ghosts of Myself”, was created by second-year Liz Barker. The work consists of five individual watercolor paintings that together form an elaborate story that Barker purposefully left open to interpretation.

“My favorite thing (and the scariest thing) about art is how it’s meaning can grow and change beyond the intent of the artist, and I went into this piece wanting to leave plenty of room for the audience to tell the story with what I’d given them,” Barker wrote in an email interview.

Drawing inspiration from contemporary artist, Amy Cutler and her work; Barker elaborately displays the trials and tribulations that come with growth through her simplistic backgrounds that leave a focus on a subject that has been bruised, beaten and even decapitated in one painting.

“I believe that the marks we bear tell part of the story of where we’ve been and who we are, at least more so than a blank slate,” Barker wrote. “Not just scars but tattoos, wrinkles, freckles, band aids, doodles done in sharpie, notes scrawled on a hand, chipped nail polish, whatever. They make the viewer wonder what happened. They’re a visual clue to the fact that there’s a story to tell. It’s also somewhere between morbidly amusing and really cathartic to decapitate yourself.”

Barker leaves a lot of room for the observer to interpret the piece in their own way and to tell their own version of the story on those walls. Barker’s expression of the past and the different versions of the self create a nostalgia that encourages past reflection.

Another piece by Barker, “College Burnout” is made from a laser-cut wooden figure encased in a lantern, suspended on strings.

“This piece was for a final project at the end of the semester, so it was pretty reflective of my mood at the time.” Barker wrote.

Burnout is a feeling all too familiar to college students. Barker went into the piece with relatability in mind and while choosing to keep the figure faceless was a logistical decision rather than an artistic one, it adds to the piece by allowing anyone to see themselves within the glass walls of the lantern.

“I hope it’s something people can find some catharsis and humor in,” Barker wrote.

Connected to the bottom of the figure’s feet is a piece of string, which at first seems to serve no real purpose to the piece, but Barker cleverly intended to set the string on fire to add another layer to the piece’s title.

“The string tied to the figure’s feet would be lit, burning it’s way up to the wooden figure until that figure also caught fire and eventually the piece self-destructed while the audience watched,” Barker wrote. “Unfortunately they don’t let you set things on fire in the Isermann building (shocking, I know), so the piece won’t actually be finished until I can find a good place to burn it.”

While it is sad to hear of the piece’s inevitable fiery end, Barker’s expression of college struggles kindles encouragement in other students and gives them a sense of solidarity.

While “Shit Wagon” may claim the title of most punk vehicle, “Yorik, the Death Horse”, projects a menacing presence that even Jack Skellington would be scared of. Created by second-year Claire Stout, the ride was built to participate in the Parking Lot Regatta, where Stout developed a closer relationship with her steed.

“It started out as just something to race with but then it became something that I could invest some artistic creativity in,” Stout wrote in an email interview. “The way that the head bobbed up and down as I pumped the cart along made me think of the head of a running horse. It was almost like it was me and my cart working as a team to win the race.”

At the bow of Stout’s ride is Yorik himself, named after a dead jester whose skull was recovered by a gravedigger in Act Five, Scene One of Shakespeare’s Hamlet. Sticking to the grim nature of the scene Stout decided to go for an intimidating and shocking aesthetic, which eventually led her to land on a horse for a figurehead.

“Horse skulls are particularly creepy and look nothing like the head of the creature so it was a nice fit,” Stout wrote. “When I was creating the horse skull, I would keep thinking of Shakespeare. I would hold it up and recite the speech from Hamlet where he is holding Yorik’s skull and say ‘Alas, poor Yorik!…’”

Yorik is made up of welded steel for the frame and other found objects including recycled golf clubs for the vertebrae of the skeleton. Stout’s skill in seamlessly welding different objects to create a stallion of death makes one think: “Though this be madness, yet there is method in’t”

A level above the rest, “Fig1: Misery,” stands out as the most in-depth work within the gallery. The first place winner was created by thesis student Miranda Chapman along with two other works, “Fig3: Tension” and “Fig4: Choked Up,” all part of the same series.

“These pieces are a part of my thesis, which is focusing on anxiety disorders,” Chapman wrote in an email interview. “Misery and sadness is just one aspect of living with these disorders.”

Chapman chose to use oil paint on top of polyester to create a popping effect that creates separation between the subject and the background. This effect is then emphasized by the way the gallery’s lights hit the piece, casting shadows onto the polyester that create a heavier focus on the subject. Chapman also used embroidery on top of her paintings to show the difficulties of living with anxiety by depicting them as physical conditions. In the case of “Fig1: Misery”, Chapman used red embroidery to both depict the tears that come with misery and depict anxiety as a dermatological condition upon the face of the subject.

“I’ve personally never seen paintings on sheer material, so I decided to give it a shot and I fell in love with how it almost calls to the viewer’s attention,” Chapman wrote. “It gives my pieces a unique quality that makes people stop and observe the piece longer. But it also gives my subjects an ethereal feeling that supports my message.”

Chapman has a lot to be proud of, having won the 2020 Juried Art Exhibit, and hopefully students will soon see Chapman’s piece among the other legendary works in Hamilton Center.

“This is my fourth year having a piece in the show, and it’s my first year winning anything at the show,” Chapman wrote. “So it was like a recognition of all the work I’ve done over these four years and my progress in becoming a better artist.”