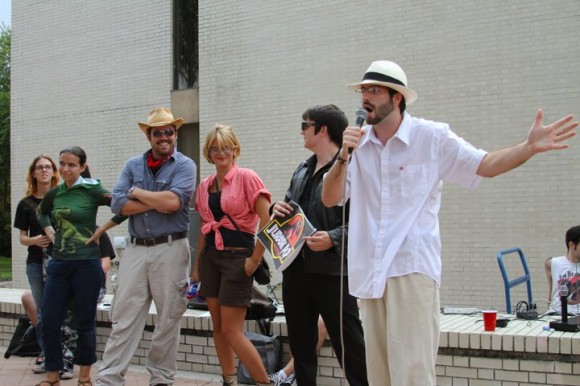 The Jurassic PCP sponsors pitching their concept at the semester’s, and the new palm court’s, first Towne Meeting.

Jurassic Palm Court Party has won as New College’s choice for this year’s Halloween celebration. It accumulated 219 of 505 votes, beating Night of the Living PCP by a mere four votes. The Floor is Lava PCP garnered 36 votes, Sluts PCP raked in 21 votes, and Mothership Connection PCP brought 14 surprisingly funky votes, despite its withdrawal by transfer student Jacob Albanese. The winning theme was created and proposed by thesis students Rikki Miller, Tom McKay, Dolan Cochran, Jennifer Zimmerman, Micheal Dexter and Sarah Iacobucci. The Catalyst interviewed sponsors of both of the leading themes concerning what decorations and activities they were planning, who was set to be responsible for which piece of their plans, and why they chose their specific themes in the first place.

“Dolan and I have been talking about this since like first year,” reminisced Miller about the Jurassic theme. “Also we’re all thesis students so we thought it would be better to do this in the fall, while we still have time.” Cochran added that dinosaurs have always reminded him and his friends of their childhoods, and Zimmerman pointed out that dinosaurs achieve a nice touch of horror without really being very scary. All of these served as reasons for their choice of theme. Dexter added, “there are multiple ways to dress: you can be dinosaurs or characters or just safari or Adam and Eve.”

These sponsors have hinted at several alterations to the campus in preparation for Halloween. Dexter will be lining palm court, referred to as “the Tyrannosaurus Rex paddock,” with temporary jungle flora, he says. McKay promises a “smashed tiki hut” modeled on the bathroom the film’s lawyer character dies in, which will double as a control room for the DJ, and may be topped by a fog-breathing T-Rex head. Palm court’s entrance is to be overshadowed by a “gigantic Jurassic PCP archway,” and efforts are being made to dress the guards in khaki shirts and appropriately-labeled orange construction helmets.

Their plans for Z green include incorporating it into the scavenger hunt as a “dino dig” site featuring bone candies, “raptor eggs,” and Barbasol cans, those last signifying the container Dennis Nedry seeks to steal his employer’s genetic samples in during the movie. They hope to turn the new black box theater into a traditional rave room, except that light-up wires reminiscent of an electric fence are to transform it into a “raptor cage.” Their ideas for the chill-out room recall the theme park’s restaurant and gift shop, consisting mainly of stuffed animal dinosaurs and something resembling the feast laid out for the park’s distinguished guests near the beginning of the movie.

Unfortunately, the students of New College will see none of the second-place team’s ambitious plans. Second years Mar Echevarria and Bryce Bresnan, third years Sherise Gamble and Francesca Levya, and thesis students Bianca Beebe and Winn Haslam envisioned an interactive haunted house replete with touchable “brains” and “eyeballs,” all inside a geodesic dome constructed on Z green. They planned for the black box theater to become ground zero in a nuclear holocaust, with a plywood structure at its back housing a mad scientist and his dancing, mutated experiments. Most of the rest of their plans centered around voodoo, Santeria, Evil Dead, Swamp Thing, and plain old zombie movies as themes for palm court and elsewhere on campus.

Some have brought up the possibility of a runoff election, in order to account for the fact that the four-vote spread was dwarfed by the 71 votes tallied for themes other than these two contestants. Vice President of Public Affairs and fifth year Alex Cline, in an email to the student body, quoted the Great Book law addressing this issue, which roundly rejects runoffs with the statement, “The theme with the most votes at the end of the balloting period shall be declared the winner.”