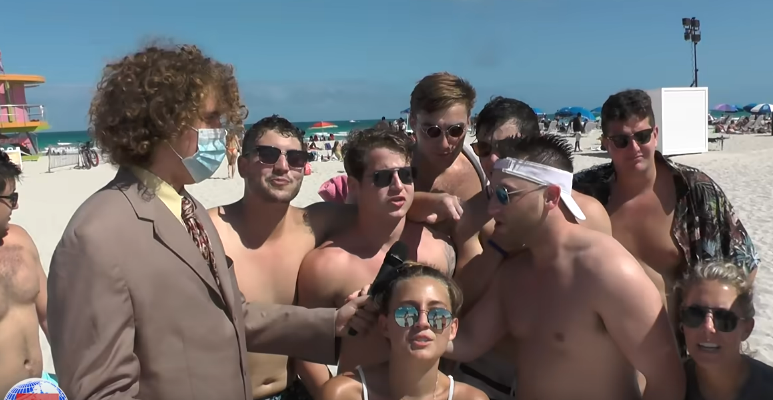 The thumbnail for Channel's 5 most popular YouTube video, "Miami Beach Spring Break." published on Apr. 11, 2021, and consisting of interviews with beachgoers in the midst of the coronavirus pandemic.

In 2022, receiving news has become such a streamlined process. In the past, people had to rely on newspapers, scheduled TV and radio broadcasts in order to stay up to date on what was going on in the world. Now, in a time where nearly everyone in the developed world has a smartphone in their pocket, staying informed has never been easier.

While this is beneficial for widespread dissemination of information to the public, increased accessibility to news in the modern era also poses some problems. Namely, that there are so many news sources available to the public that it is almost dizzying looking at the options. People now can choose to get their news from Twitter, Instagram, YouTube and even more independent websites that the Internet now provides a home for.

Among all of these choices, one organization stands out from the rest: Channel 5 with Andrew Callaghan has consistently and impartially covered some of the most important issues impacting the world for over one year.

Callaghan has been making waves in the online community for years now because of his unique and empathetic approach to journalism. Callaghan first achieved notoriety online in late 2019, with his YouTube channel All Gas No Brakes, based on a memoir-zine of the same name that he wrote and published earlier that year, where he wrote about his experiences hitchhiking across the U.S. over 70 days. All Gas No Brakes was the first project Callaghan worked on where he utilized his signature gonzo-style interviewing tactics. This channel features about 24 videos of Callaghan traveling to various American cities and events, conducting man-on-the-street interviews and recording raw, unfiltered reactions from the people he meets.

These interviews are also characterized by Callaghan’s willingness to step back from the spotlight and not just allow, but insist that his subjects speak for themselves and speak honestly. Flagship videos for the All Gas No Brakes channel include “Flat Earth Conference,” “Minneapolis Protest” and “Fourth of July.” “Flat Earth Conference” followed the crew as they learned about the various conspiracies flat earthers believe in, all of which seemed to be random and very loosely connected. “Minneapolis Protest” featured footage from the Minneapolis riots in the wake of the murder of George Floyd, capturing a sentimental perspective of the perceived ‘violent’ protesters. “Fourth of July” examined the youth of America in the summer of 2020, mid-pandemic, partying on the beach in Marquette, Michigan.

Callaghan and his team’s involvement with All Gas No Brakes ended in March 2021, citing creative differences with the production company they were signed to, Doing Things Media. Callaghan was evidently moving in a direction with his content that the company deemed “too political.”

Not long after his departure from All Gas No Brakes, Callaghan and his collaborators returned to the YouTube journalism scene with the new platform of Channel 5. Their first video back, titled “Miami Beach Spring Break,” documented the 2021 spring break, the first since the beginning of the COVID-19 pandemic. This video showed Callaghan and Co.’s decision to lean into the more serious, journalism side of their content, rather than the comedic side that was shown so heavily in previous videos. In the video, the editors include footage from mainstream news sources to add more structure to the reporting, proving Callaghan’s focus clearer than ever before.

The follow-up to Channel 5’s first video was focused on a heavy, complicated subject. “Derek Chauvin Trial Verdict” was uploaded to YouTube on Apr. 29, 2021. The video follows Callaghan in Minneapolis, joining its citizens as they await the verdict of ex-police officer Chauvin, who was found guilty of murder in third degree, murder in the second degree and manslaughter in the second degree for the death of George Floyd.

Channel 5’s coverage of the monumental moment in history was wholly human and avoided political agendas. Callaghan spoke directly with several Minnesotans, all of whom talked freely about their feelings: the anger, the sadness and the exhaustion these people were struggling with were so visceral. First and foremost, Callaghan shows what the city and its people are calling for. Callaghan puts the power back into the hands of the people, giving them a platform to speak their truths.

While the first half of the video is centered around the titular event, the latter half of “Derek Chauvin Trial Verdict” focuses on the murder of 25-year old Daunte Wright, which occurred at the hands of police officer Kim Potter, in Minnesota just nine days before Chauvin’s verdict. In this section of the video, Callaghan interviewed Wright’s brother, Damik Wright, and his cousin, painting a picture of who Wright was and what he meant to the people in his life.

Callaghan shows his audience the clear impact of Wright’s death in his community. The structure to the video underscores the fact that despite the victory with the conviction of Chauvin, there is obviously still work to be done in the area of American police reform. The finale of the video is incredibly sentimental, depicting Callaghan talking to Wright as he fondly remembers how he and his late brother would always go to the same convenience store to buy fruit juice and Gushers. The video ends with the two sharing some Gushers and Wright promising his brother that there will be justice for his murder.

“Derek Chauvin Trial Verdict” is one of the most holistic and impactful examples of modern journalism that one can find on the Internet. Callaghan and his team evidently possess a huge love for journalism and the good it can bring when done right. Channel 5’s other videos are just as well-done as this one. Stand-outs include “War in Ukraine,” “NRA Conference” and “White Lives Matter Rally.” “War in Ukraine” presents the up-close, sad reality of the Ukrainian citizens living in war conditions and how terrifying it has been for them, all politics aside. “NRA Conference” shows the tragic effects of the Robb Elementary School mass shooting in Uvalde, Texas, as well as covering the National Rifle Association (NRA) conference that was held days after the shooting. “White Lives Matter Rally” brings the team to Huntington Beach, California where they covered a White Lives Matter rally and a subsequent counter-protest, which emphasizes how politically polarized the country really is.

In an era when it can be hard to trust various news sources, Callaghan and Channel 5 are proving to be that ray of sunshine in an otherwise murky field. Channel 5’s content can be viewed on YouTube for free, or for just five dollars a month, there is a Patreon page available for those who want to further support the channel and receive additional content.