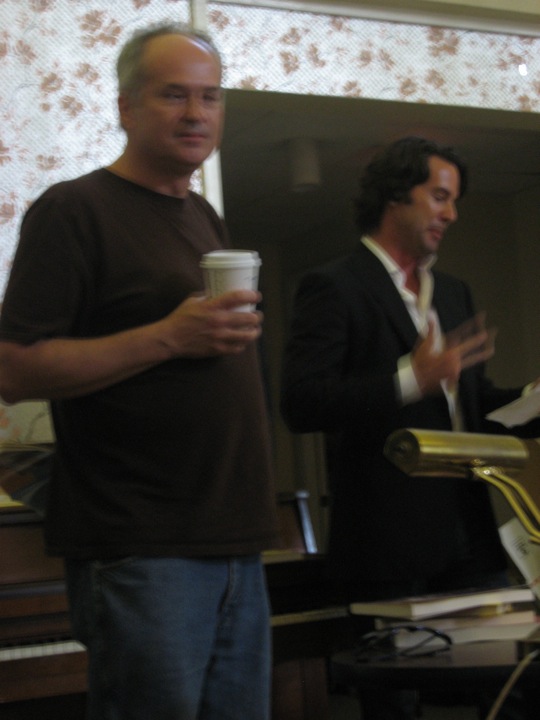 As writer-in-residence Adam Davies introduced him to the Four Winds’ crowd of eager listeners, Josip Novakovich’s status as an illustrious and prolific wordsmith was firmly cemented. Currently a fellow at the Hermitage Artist Retreat, Novakovich has published a novel, three short story anthologies, two collections of narrative essays and a creative writing textbook and has taught at a variety of prestigious institutions including Bard College and Pennsylvania State University. He is also the recipient of numerous literary accolades, including the Whiting Writer’s Award, a Guggenheim fellowship, two fellowships from the National Endowment of the Arts, an award from the Ingram Merrill Foundation and an American Book Award from the Before Columbus Foundation.

That said, perhaps the most remarkable aspect of Novakovich’s mastery of the English written word is the fact that he accomplished such a thing all while writing in his second language.

Novakovich, who emigrated in 1976 from his native Croatia at the age of 20, visited the Four Winds Café on April 22 to share his written work and linguistic experiences with a motley crew of New College students and Sarasota community members, continuing the café’s recent trend of casual discussions with prolific literary figures. He read a selection from his essay collection Apricots from Chernobyl entitled “Writing in Tongues,” recounting his first forays into the English language from his younger days. From time to time, he segued out of the text and into a personal anecdote regarding his current thoughts and observations on the subject, weaving his spoken storytelling into the textual experience.

In particular, Novakovich spoke of the unique perspective he held as a native Croatian speaker writing in English as well as the difficulty involved in first entering that linguistic sphere. “It seemed to me an impossible language to learn,” he said, reminiscing about his school life back home. “It became sacrilege to write in another language besides the language of your soul, of your mother’s milk.

“Once I wanted to order eggs over easy, but there was no expression for it in Croatian,” he joked during one of his tangents about adapting to life as an English-speaker. “So I said ‘make me two eyes out of eggs.’ She must have thought I was crazy.”

Despite his early difficulties, Novakovich was spurred forward by his love of the language and his interest in exploring it further. “I lived in English,” he explained, recounting his college years. “If language is the house of conceit, couldn’t English be my home?” With such notions in mind, he persevered, and eventually his study and practice of spoken English gave him the “confidence to write in English.”

He credited much of his success as a writer in America to the work of famous foreign wordsmiths before him, especially Vladimir Nabokov, paving the way for himself and fellow “linguistic migrants” to make a name for themselves abroad. “We don’t have to be a linguistic servant shining shoes for Henry James,” Novakovich said. “We’ve come a long way.”