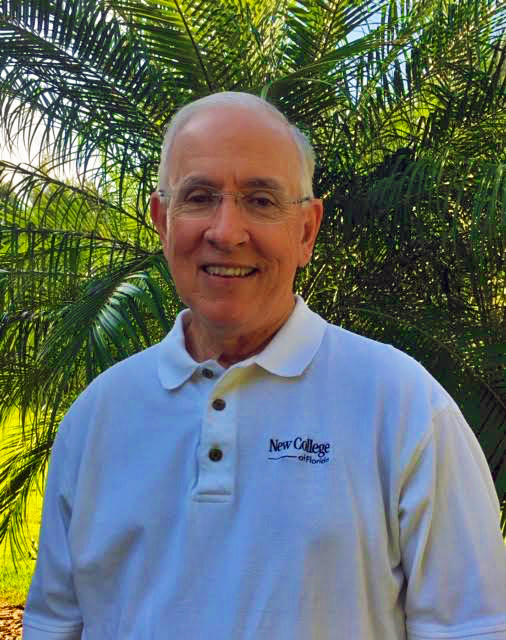 Martin joined New College in 2001, during the college's transition to independence.

Vice President of Finance and Administration John Martin has worked at New College since its separation from the University of South Florida (USF) in 2001. During this time, Martin has witnessed and contributed to the growth of the college, managing the operating budget and ensuring the various support functions of the institution run smoothly. After spending over 45 years of his professional career in higher education, Martin plans to retire at the end of this semester.

Martin joined New College in June 2001, directly after Governor Jeb Bush passed the law that devolved the college from USF and designated it as the “Honors College for the State of Florida.” While the college welcomed independence, separation brought various challenges. One of the most crucial needs was independent leadership.

“At the time of independence, most of the administrative functions were guided by top level managers at USF Tampa,” Martin said in an email interview. “The College needed to develop its support operations separate and apart from USF Tampa.”

Gordon “Mike” Michalson, who served as Dean and Warden from 1992 to 1997, was appointed by the Board of Trustees as the interim President. He would later be selected to become the official president in 2003. According to a Catalyst article from 2001, “While the President will guide the campus as a whole, it will primarily be the responsibility of the offices of the Provost and the newly-hired Vice President of Finance and Administration, John Martin, to see to the daily business of the school and to iron out the details of the new college.”

Martin’s initial responsibilities included setting up the campus’ finances and creating an administrative structure such that the school could meet accreditation state requirements at the end of the year.

“I was honored that the search committee had confidence that I could add value in helping set up internal administrative support functions plus assist in sharing the college’s goals and objectives with Florida’s executive and legislative branches of government responsible for appropriating the vast majority of our funding,” Martin said.

A second challenge the college faced was funding. Governor Bush had previously been a stark opponent of the college’s independence, calling for a “heartier debate” on the issue. Bush argued that voters should see the “inequity of the idea” that an independent New College would require the state to spend more money per student than any other institution in the Florida State University System (SUS). There was also skepticism among some SUS administrators and other legislators that New College would not be able to survive and flourish as an independent institution. Because of these arguments, Bush vetoed the $1.2 million the college requested during its first year of independence, instead agreeing to restore $500,000 for the academic year.

“When [Martin] arrived, the Governor had just vetoed the funding needed to pay his salary,” President Donal O’Shea said in an email interview. “In the hard times, he has always privileged people, the academic program and students. He has done so collaboratively and transparently, and is one of the most respected chief business officers in the state.”

Despite the challenges, Martin proved to be an invaluable asset to the college.

“The skeptics were soon silenced as the College quickly garnered top national rankings as a public baccalaureate institution,” Martin said. “That happened because of the outstanding faculty, division chairs, staff and students all pulling together, plus top-notch leadership at the time, including NCF’s first Board of Trustees Chairman and former State Senator Bob Johnson, President of the New College Foundation Lt. General Rolland Heiser, President Mike Michalson, Provost Charlene Callahan and Special Assistant to the President Suzanne Janney.  Those coming later have all helped build on the college’s success and reputation.”

“Of course, none of this would have happened without the hard work and dedication of the entire campus community, especially those comprising Finance and Administration,” Martin said. “The managers and staff comprising the Division of Finance & Administration are second to none. Of particular note, Associate Vice President for Finance Kim Bendickson-Diem has been the long-standing steady hand helping guide the College’s finances and business operations.”

Martin has been working in higher education for over 45 years. He started at Duke University, then moved on to Florida State University, where he worked in a number of administrative positions, including Assistant Vice President for Administration. From there, he served as the Associate Vice President for the University of Houston before being promoted to the Associate Vice Chancellor for Administration for the University of Houston System. After gaining experience at these larger institutions, Martin transitioned to New College.

“Being associated with an institution that is so well respected at the local, state, and national levels is a great point of pride for me,” Martin said. “Its students, faculty, staff, trustees and alumni are fantastic.”

He also notes that his time at New College has been more challenging, and in turn, more rewarding, than at larger institutions.

As he exits his rewarding professional career, Martin offers advice to students getting ready to start their careers.

“Be flexible with your goals, […] earn the reputation of being honest and trustworthy […] and make taking care of your health a top priority throughout your life,” Martin said. “Rest assured that your New College education/degree will serve you well in both your work life and personal life.”

A search committee has been actively seeking a professional to fill the role of Vice President of Finance and Administration. The committee is nearly finished narrowing down applicants and, according to Martin, the pool is strong.

“No matter who is selected, they will bring new and innovative ideas to the significant benefit of the college,” Martin said. “The person will receive strong support from the units comprising the Finance and Administration Division, President O’Shea and his entire senior leadership team.”

Martin notes that his successor will have three immediate challenges: growing enrollment, raising funds to renovate the Pei dorms and to construct new dorms and convincing the Florida Legislature to appropriate capital funds to plan and construct the proposed Multi-Purpose Facility to replace most of the Palmer Complex buildings.

“We have to be true to our pledge to the Board of Governors (BOG) and Legislature to grow the College’s enrollment to at least 1200,” Martin said. “An important part of doing so involves working with the Foundation to raise funds to renovate the Pei dorms. In addition, we must also develop viable financing to build dorms supporting at least 200 new beds. Finally, we need to capitalize on the BOG’s support for the Multi-Purpose building during the 2020 legislative session and hopefully receive the requested $6 million in funds to plan the facility, followed by $17.4 million in 2021 to construct Phase 1.”

In a few weeks, Martin will officially put an end to his long professional career. He looks forward to having more time to devote to his family and interests.

“[I look forward to] spending more time with Judy, my wonderful wife of 40 years, and traveling together around the US and beyond,” Martin said. “Volunteering in the community and playing a little golf are on my to-do list as well.”

After years of ensuring the college stays afloat and develops with a focus on students, faculty and staff, Martin leaves behind a legacy of dedication, honesty and compassion that will be hard to replace.