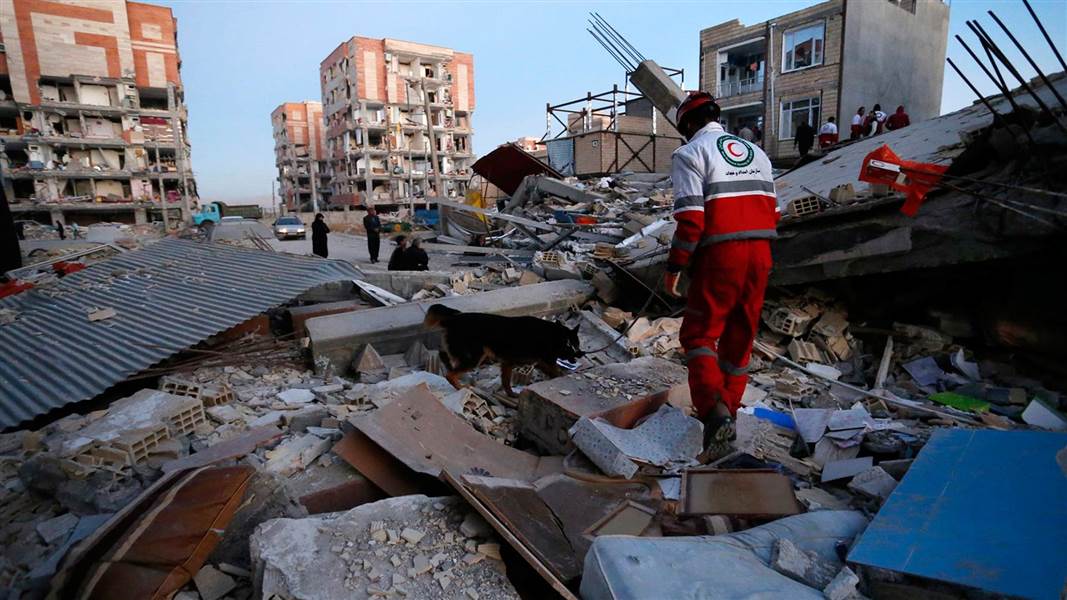 Iranians frantically dug through rubble in a search for survivors on Monday, after a devastating earthquake struck near the Iraqi border that killed or injured hundreds of people. More than 500 people were reported dead and thousands injured after the earthquake, which has been, so far, the deadliest of 2017, struck near the border of Iran and Iraq late on Sunday.

The full force of the earthquake, with a magnitude of 7.3 on the Richter scale, surpassed the earthquake that hit Mexico City in September. The force of the earthquake, recorded at 9:48 p.m. on Sunday, was felt as far away as Turkey and Pakistan. The epicenter was located near Ezgeleh, Iran, about 135 miles northeast of Baghdad. Seismologists in the country said it was the biggest quake to hit the western part of Iran, causing heavy devastation. Rubble from the earthquake caused buildings to collapse, destroyed cars and has left people sleeping in the streets in fear of aftershocks.

According to the IRNA, the state-run news, it is reported that 530 people were killed and 7,460 people were injured in Iran. At least 535 people were hurt and eight were killed on the Iraqi side of the border according to the Health Ministry. A region particularly hit harder was the city of Pol-e Zahab, a city in the western Iranian province of Kermanshah, authorities said that at least 236 people had died in the city–which has a population of 30,000–and the main hospital was believed to be at least partly running.

The earthquake received a lot of attention with hundreds of people in Tehran waiting in lines to donate blood for medical aid in response to a call from the government. Iran’s supreme leader, Ayatollah Ali Khamenei delivered a message of condolence after the disaster and urged rescue workers to not stop their search for survivors.

“The officials should hasten in these first hours with all their might and determination to help the injured, especially those trapped under the rubble,” his office reported. By Monday evening, Iranian officials stated that the rescue mission was nearly over. An S.O.S. alert however, is out for those who have reached safety to report their status, as well as a global effort to donate money for aid and relief.

Foreign reporters were not allowed to visit the scene, which is a different approach and a change from previous disasters that have hit this year, which have received abundant media coverage. The Iranian Red Crescent used rescue dogs to search for survivors since the earthquake that hit the city of Bam in 2003, which resulted in the deaths of 20,000 people. The country’s religious leaders regard dogs as unclean, but the use of guard and rescue dogs is accepted.

After the quake on Sunday, the public and opponents of Mahmoud Ahmadinejad–who was president of Iran from 2005 to 2013–have spoken out against a program introduced by him to build low-income housing, including in Pol-e Zahab. Many of the buildings had been poorly constructed, which could have increased the destruction and death toll from the quake. His defenders argue that the buildings were on fault lines and that nothing could have been done. Initial reports from the Kurdish region of Iraq reported less damage and fewer deaths on that side of the border.

Iran lies on dozens of fault lines and is prone to quakes. Residents are familiar with the government’s lackluster relief efforts and have started aid relief groups themselves. The United States, which does not maintain normal diplomatic relations with Iran, has offered and sent aid in the past quakes to have hit the region.