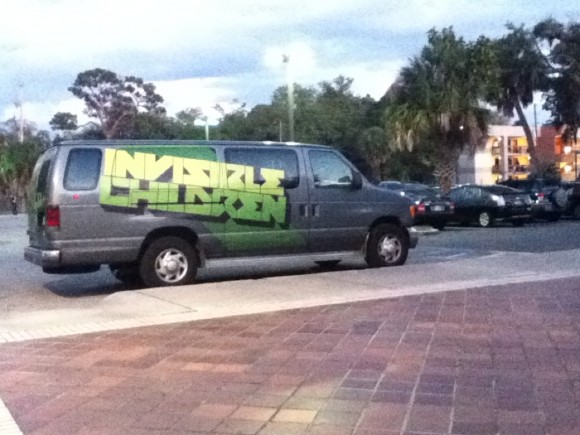 The Invisible Children road crew travels across the US to show their documentaries.

On the morning of Mar. 5, 2012, a 30-minute video was posted online about a man, his son, and a Ugandan rebel leader. The video, self-proclaimed as a viewing “experiment” and entitled KONY 2012, was put together by Invisible Children Inc. and has gained over 100 million views in the two weeks since it was uploaded. Although the message it purports is to stop the atrocities that Joseph Kony, leader of the Lord’s Resistance Army (LRA), has committed against the citizens of Uganda, it has drawn a great deal of criticism as well as support. Yet, in today’s world, criticism is as powerful a publicity tool as support could ever be.

Kony has been accused of kidnapping over 30,000 children in northern Uganda and other neighboring countries, selling the girls as sex slaves and turning the boys into child soldiers for 30 years. He has been wanted for war crimes by the International Criminal Court since 2005, and is purportedly hiding in the forests of the Democratic Republic of Congo (DRC). Despite all of this, Kony has been fairly unknown to the general American public — that is, until Jason Russell, co-founder of Invisible Children and the narrator and director of KONY 2012, was able to make him a household name in a matter of days.

The film itself is emotionally evocative, paralleling the life of Russell’s own young son and that of a Ugandan boy named Jacob, whom Russell met on his trip to Uganda after graduating from film school. Jacob was forced to become a child soldier, but escaped to a refugee camp, and it is his story that the original Invisible Children documentary follows. It calls for regular people to fight for Kony’s capture by encouraging 20 “culture makers” (read: celebrities) and 12 “policy makers” (read: politicians) to publicly support the movement. In theory, this would then lead to the training of Ugandan military forces as wells as updates in their technology to help arrest or kill Joseph Kony.

In an attempt to raise awareness at New College, first-year Amanda Bragg contacted the Invisible Children road crew to bring the film to New College on this past Friday, Mar. 16. The group travels around the United States in a van, bringing KONY 2012 to high school and college campuses for viewing and raising awareness of the issue. They set up in the TA, and played the film for an intimate group of about 10 Novocollegians.

“I took a class called Multicultural Studies […] and the teacher introduced us to various movies about genocide and then she showed us the [first Invisible Children] documentary,” Bragg explained. “I was immediately moved by it, to see the suffering that was occurring, and ever since then I’ve been involved in spreading awareness.

“One of the most powerful parts [of the Invisible Children movement] is that anybody can be involved,” Bragg added. “Many non-profits operate on a select basis, where only those who have the expertise in that field can help, whereas Invisible Children really relies on just spreading the word. I really just want this event to promote awareness and discourse.”

Bragg, who has been involved with Invisible Children for years, also recognizes that there is a lot of scrutiny around her charity of choice.

“I feel that every non-profit has things that it can do better,” she said. “There is always going to be scrutiny for any organization that says they’re going to use your money for something. I have done extensive research, for years, on this organization, and all of the arguments I’ve found against it have been ones that were sound, but also came from sources that I didn’t exactly trust. And even their discontents have been grudgingly able to accept that some of the programs Invisible Children does incorporate are outstanding. Their scholarship program benefits about 800 children a year, sending kids to college when they wouldn’t have been able to go otherwise. They’ve built camps, rehabilitation centers and early-warning towers between villages. These are all concrete things that they have done that show how they use our money.”

On the other side of the KONY 2012 movement, however, are a growing number of discontents in both the political and public realms around the world. Their critiques of KONY 2012 seem to go beyond the video and onto a three-fold focus — the Invisible Children charity itself, the Ugandans, and the political ramifications if what is suggested in the video comes to pass.

A common issue that is associated with all of Invisible Children’s campaigns is the allocation of funds and donations. Sources such as the Huffington Post and CNN mention that only about one-third of their money goes to helping out in Uganda, and that because of this, donations that are sent to Invisible Children are only one-third as effective as those sent to other charities, like Save the Children or water.org.

On the ground in Northern Uganda, the response to the KONY 2012 video has been largely negative. One showing of the video was canceled because of the outrage of the audience and rocks that were thrown at the screen. The consensus seems to be a certain level of anger based on the propagated neocolonialism that runs rampant throughout the video.

Hugo Van der Mewe, an international first-year student from the African country of Namibia, disagrees profusely with the methods that Invisible Children is taking to meet their end goal.

“I’m thankful for the people who are actually interested in this, people who actually want to express passion — not to KONY 2012 so much, but to [helping Uganda],” Van der Mewe stated. “However, it is woefully misplaced interest because it addresses an issue that doesn’t really exist anymore. [Kony] has about 300 soldiers, hasn’t been in Uganda for six years and is basically hiding out in the jungles of the DRC. He is a peripheral figure in the set of geopolitical problems in that area.

“It’s disturbing for me to see, because people are sending money to a cause that is negligible in terms of the real needs of the Ugandan people,” Van der Mewe continued. “Ugandan journalists, Ugandan intellectuals, East African intellectuals in general are, as a whole, incredibly antagonistic towards the movement […] They feel like it’s messianic, it’s neocolonial, it shows this image of Americans being able to… I mean, just look at their name. It’s called ‘Invisible Children,’ which indicates that these children are invisible, but for Ugandans, for the last 30 years, these kids have not been invisible. [The video] re-contextualizes what has happened in a way that makes Americans and young, white, college-going Americans the only ones who are able to save these poor black Africans from this fate, and that’s offensive to them.”

One of the major concerns, for both Van der Mewe and a number of other journalists, is the armament of the Ugandan National Resistance Army, led by the current president, Yoweri Museveni. Museveni’s presidency has been likened to a dictatorship, and he has retained power, in some cases, from some faulty public elections and the use of kadogo, or child soldiers. The worry, for many, stems from what other atrocities might occur after arming his military with the technology and intelligence that KONY 2012 has been pushing for.

It cannot be stated enough that yes, Joseph Kony is a terrible, horrific, grotesque war criminal who preyed on unarmed citizens and abused, brutalized and killed children who learned to grow up much too fast. There is no definitive answer on how to deal with Kony, or the KONY 2012 movement, but to say that any donation, to any charity, cause or non-profit, should be treated with as much delicacy as the filing of taxes.

Information from this article was taken from www.huffingtonpost.com and globalpublicsquare.blogs.cnn.com. For more information on other non-profit and not-for-profit organizations, visit www.charitynavigator.org.