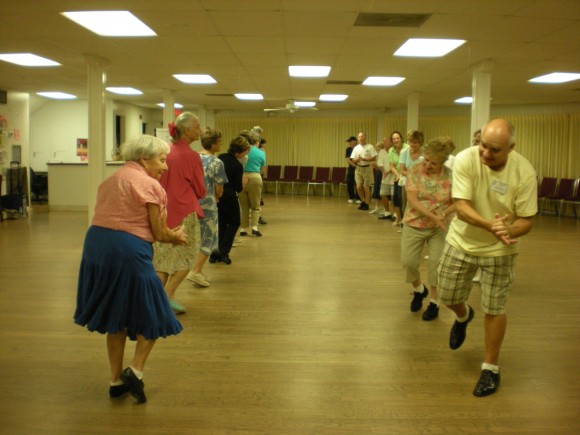 All photos courtesy of Grace Otto

Feet shuffled, tapped, stomped, slid and lifted artfully as the members of the Sarasota International Folk Dance Group at the John Chidsey Bayfront Community Center danced to a snappy tune. The members composing the class warmly welcomed the Catalyst with a mixture of folksy numbers from a large variety of different cultures and backgrounds.

Folk dancing is a vague term used to describe the traditional dances that originate among the common people of a nation or region. International folk dancing combines music and dances from a multitude of countries, though this group focuses primarily on those from Eastern Europe. The Sarasota class claims to have close to 1,000 pieces of music from places such as Greece, Israel, Romania and Russia to name a few.

“There’s no other kind of dance that I know that you can do that many different kinds of dancing all in one night or in one group,” active group member Caroline Lanker said. “If you took all the dances that everybody in this room knows, you’d have hundreds.”

The John Chidsey Community Center is located a mere three miles away from the New College campus—a short car trip or easy bike ride for students. The class meets every Wednesday from 7:00 p.m. to 9:30 p.m. at 803 N. Tamiami Trail. It normally costs five dollars a night but in an email to the Catalyst, the group’s Co-coordinator Judy Merkt stated she was pursuing a discounted fee exclusively for New College students.

“The first hour is instruction,” wrote Merkt, “The rest of the night is ‘just dancing’ to dances requested by attendees.” The flyer explained that all one needs to bring are some comfortable clothes and shoes along with some energy and a smile. Although the class primarily consists of members aged 40 to 80 and above, it is open to anyone interested 18 and up. The attendees happily shared their own first experiences of folk dancing with the Catalyst and eagerly encouraged the “young blood” of Sarasota to come and join. 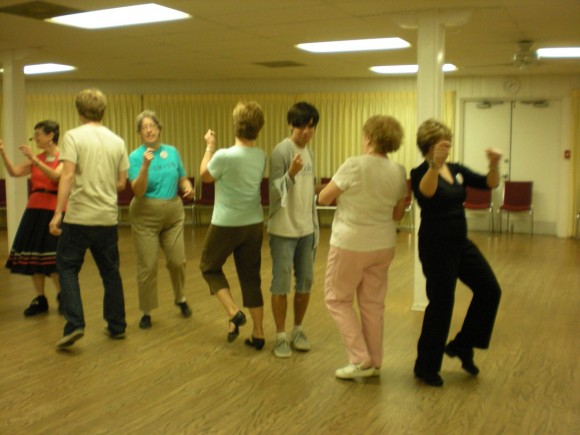 First-year David Scrivener (center) gets his groove on with some of the ladies at folk dancing.

“I lived in New York City as a single person and I found folk dancing as a way to meet other single people,” Zigras revealed, “That’s how I met my husband of 32 years—and we’re still doing it.”

“I started dancing when I was in college in the 60’s,” Lanker remembered, “By that time folk music was big.”

“I think it’s a great experience for college students… to talk and just meet people without the bar scene,” Zigras added. “It’s fun, it’s exercise [and] I love the music and the people.”

In order to keep folk dancing alive, Lanker explained that younger generations have to get involved. “They [folk dances] were really big in the 60’s, 70’s and even early 80’s,” she said. “But the problem is when I started there were lots of college kids doing it. As we got older, it was the twentysomethings, and then the thirtysomethings and then the fortysomethings…”

The instructor Andi Kapplin, described by her class as “a wonderful teacher,” drives from Tampa to head the class. Her light and cheery attitude helps deliver clear instructions between steps—though the rest of the class is more than happy to help any newcomers.

The class encompasses many types of traditional dance, including various line and circle dances. With kind hearts and a great deal of patience, the folks at folk dancing got even the most hesitant dancers out on their feet.  The comfortable space and wooden flooring loosened people up a bit and got them to show off their stuff.

“There’s just joy when you do it,” Millet summed up simply.