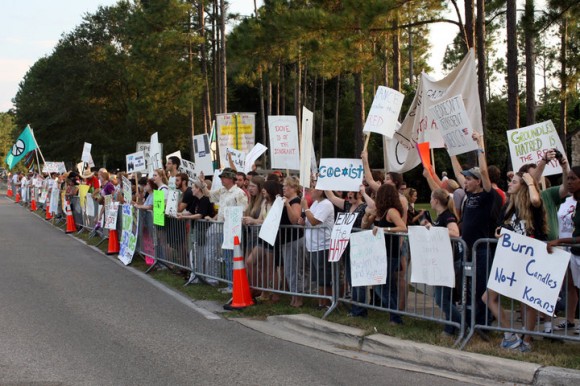 Members from various groups untied to protest outside of Dove World Outreach Center in Gainesville on Sept. 11.

A small non-denominational church with roughly 50 members caused a worldwide uproar this past week with plans to host “International Burn a Koran Day” on its property in Gainesville on Sept. 11.. After a day long yo-yo with media, Pastor Terry Jones brought a decisive end to the masquerade on Sept.10 by assuring reporters that the burn would not take place. Instead, he flew to New York later that night where he sought a meeting with Feisal Abdul Rauf, the man who is planning to build an Islamic center (Park51) two blocks from Ground Zero.

During the week of Sept. 5, Jones metamorphosed from an unknown pastor of a widely unheard of organization to the top news subject across the globe, with media around the world focusing on  his church, the Dove World Outreach Center (DWOC), and its plans for the Quran burn. The week also resulted in two distinct controversies, the Quran burn and the Park51 plans, melding together as Jones suddenly claimed Park51 as a motivation for the burning.

On Monday, Sept. 6, as news coverage of the event escalated, protests began in Kabul, Afghanistan, with the crowd reaching nearly 500 according to an ABC News report. Protestors chanted “Death to America” and burned U.S. flags. Demonstrations also occurred in Pakistan, and thousands of Muslims protested in Indonesia on Sept. 4. This year, Sept.11 fell on Eid, a Muslim holiday celebrating the end of Ramadan; the burn set for the same date promised to dampen Muslim celebrations.

The protests continued on Tuesday. Also on Tuesday, the top U.S. and NATO commander in Afghanistan, General Petraeus, said that the planned burn put American soldiers in even greater danger, particularly if images of the event surface. Attorney General Eric Holder joined Petraeus in criticizing Jones. The Gainseville Sun reported that two members of the New Black Panther party went to the DWOC to speak with Jones about the dangers of his plan, and that Gainesville police planned to heighten security and check drivers’ licenses for those around the church on Sept 11. FBI agents met with Jones to talk about his safety, USA Today reported. The Islamic Society of North America called for an emergency interfaith meeting between Muslim, Jewish and Christian leaders, which took place in the capital in Washington. Tuesday night, Secretary of State Hillary Clinton gave a speech in Washington praising those who condemned the burn.

On Wednesday, Jones told The Associated Press that he had received hundreds of death threats and has been carrying a gun. Former governor of Alaska Sarah Palin joined a slew of others in urging Jones to call off his event, including the Vatican and evangelist Franklin Graham. As of Wednesday, Jones said he still intended to go on with his plan despite increasing pressures to cancel.

On Thursday, FBI officials again met with Jones. The famous real estate developer Donald Trump offered to buy the Park51 site in an effort to end the controversy surrounding the Islamic center planned there. Jones had recently suggested that if Rauf moved the location of his center, he might call off the burn. Rackspace Hosting, the company that hosted two websites related to Jones and the church, took down both pages, telling CNN reporters that the hate speech on the church’s sites violated the company’s policy of acceptable use. Secretary of Defense Robert Gates called Jones in an effort to dissuade him from going on with his plan. Interpol issued a global warning of violence to come should the burning take place. President Obama appeared on Good Morning America , issuing yet another warning of the danger “this stunt” could bring to American troops. Obama was careful not to mention Jones’ name.

Then, Thursday afternoon, in an interview with reporters from the New York Times, Jones, alongside the head of the Islamic Society of Central Florida, Imam Muhammad Musri, stated, “The imam [Rauf] has agreed to move the mosque [Park51]; we have agreed to cancel our event on Saturday.”

Although Jones cited the possibility of Park51 being moved as a “sign from God” not to host the Quran burn, he had not initially targeted the Islamic center as a reason for the burn, which was announced in July 2010. According to Jones, while praying on his plans a couple weeks ago, the idea came to him that what it would take to call off the burn would be for Rauf’s proposed center to be canceled or moved. “The American people do not  want the mosque there [near Ground Zero], and of course Muslims do not want us to burn the Koran.”

However, upon hearing of the supposed compromise, Rauf said that no such agreement had been made, and that in fact he had not even spoken to either Jones or Musri. Jones once again caused alarm when he said that the DWOC was reconsidering calling off the burn given Rauf’s statements. “We were reconsidering canceling it anyway,” he told CNN reporters outside of the church Thursday night.

With the burn plans “suspended,” according to Jones, protests continued to take place on Friday. The New York Times reported that in Afghanistan, while many peaceful demonstrations were held, two protests outside of a NATO base resulted in one death and at least a dozen injured people. Back in Gainesville, Luke Jones, the son of Terry Jones and a pastor at DWOC, told reporters that the burn would not take place on Saturday, but that he couldn’t speak for future plans. Later that night, evangelist K.A. Paul, who had been in contact with Terry Jones, showed The Associated Press a copy of a flight itinerary for a plane ticket Paul bought Jones, as proof that the pastor had already boarded a plane for New York though a meeting with Rauf had not been set up.

Finally, Saturday morning, Jones appeared on NBC’s Today Show and stated, “We will definitely not burn the Koran….not today, not ever,” even if Rauf does not move the Park51 location. Jones repeated that he and the church had received numerous death threats, and added that he felt  the mission of the DWOC, “to expose that there is an element of Islam that is very dangerous,” was accomplished. Regardless, protests continued in Afghanistan on Sunday, resulting in yet another death.

How did such a small group, founded less than 25 years ago, create an international outrage?

Many criticize the role of the media, including Obama, who on Sept. 10 stated, “Part of my concern is that we don’t start having a whole bunch of folks across the country think this is the way to get attention.” But Westboro Baptist Church in Topeka, KA, burned a Quran as well as an American flag on Saturday (9/11) afternoon, and Quran burnings were reported in Tennessee on Sunday.  Neither event received much attention. .

While the past week’s events brought the DWOC into the limelight, these were not the first acts by the church to garner media criticism. In 2009, the church erected the first “Islam is of the devil” sign on its property. The same slogan was printed on T-shirts worn to school by several children and made into the title of a book authored by Jones and published in August 2010. In 2009, DWOC protested the election of openly gay Craig Lowe as mayor of Gainesville and erected a sign reading “No homo mayor.”

Since the media turned its focus to the planned Quran burn, Muslim and Christian leaders as well as activist groups across the nation have united in speaking out against the event. Within Florida, several groups planned to protest the Quran burning. Charles Ernesto, a member of St. Pete for Peace, said the group planned for a peace vigil outside of DWOC on Sept. 11.

“We thought that it’s very critical, because the world’s cameras are going to be pointed on the Quran burning, that people around the world not only see Qurans being torched but they also see the Americans standing out there in opposition to that,” he said on behalf of St. Pete for Peace. Though the burn was called off, the group still held their demonstration.

The University of Florida chapters of the International Socialist Organization (ISO), Students for a Democratic Society (SDS) and Students for Justice in Palestine (SJP) also had planned to protest the burning. ISO, SDS, and SJO held demonstrations on Sept. 11 regardless of the burn cancellation. Cassia Laham, president of SJO, said that the above groups and a few more came together for the demonstration on Saturday, “to show the world that Gainesville stands up against hate and the intimidation of others.”

The groups convened in Possum Creek State Park, about a mile from the DWOC, and there had numerous speakers address a crowd of at least three hundred people. One of the speakers, Albert Meier, was in the World Trade Center on the day of the 9/11 attacks. Protestors then marched to DWOC and settled outside the church property, holding signs and chanting phrases such as “Dove Outreach, shame on you! Muslims are our brothers, too!” The demonstration lasted more than two hours. “It was beautiful,” Laham said.

Several New College students planned to go to Gainesville for a protest. Their plans included bringing fire extinguishers to symbolize putting out the flames, playing Islamic music, and holding signs sporting verses of the Quran. After the event was canceled, members agreed that they should  work in Sarasota to fight religious discrimination. Thesis student Lee Block read passages from the Quran in Hamilton “Ham” Center on Sept.11, and hopes to bring speakers to the college to condemn  religious intolerance.

Information for this article was taken from USA Today, the New York Times, the Gainesville Sun, The Associated Press, CNN, ABC, and NBC.