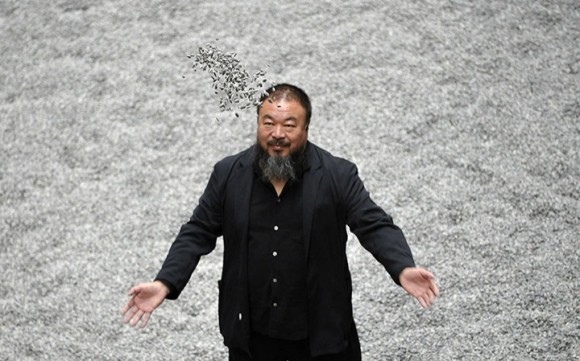 Ai Weiwei strikes a pointedly messianic pose in his latest installation at the Tate.

One hundred million ceramic sunflower seeds currently carpet the foyer of London’s Tate Modern, each handmade using traditional Chinese methods, that are the product of the labor of 1600 workers over the course of two years.  The installation, simply titled Sunflower Seeds, is designed by Chinese artist Ai Weiwei and was intended to be a shared and tactile experience with visitors free to play and lay in the shifting mass, immersed in a shared experience of ostensible conformity.  However closer examination reveals small variations within each seed, touches of the individual hands that crafted it. Commentary on the nature of mass manufacturing and consumption is embedded in the work and fittingly if not intentionally, the exhibit had to be retooled within days of its opening. Much like the socio-economic model the exhibit criticizes, the ideal of group participation did not translate into practice. Copious amounts of ceramic dust were entering the air from all the jostling and touching of the seeds, causing unhealthy amounts of ceramic dust to enter the air. To avoid health risks the Tate roped off the exhibit. Museum-goers were to look not touch. The exhibit has been widely lauded and will be on display until May 1st., however given current circumstances the artist responsible for the work may not be able to appreciate the praise.

On Sunday April 3rd Chinese authorities detained Ai Weiwei in his hometown of Beijng. Weiwei was at the airport awaiting a  flight for Hong Kong, but police informed his companions that he had ‘other business to attend to’.  The government insists that Weiwei is under investigation for ‘economic crimes’ and that this is not a human rights issue. However their hesitance to officially announce the well publicized occurrence until the following Wednesday as well as numerous other arrests of political activists this week indicate otherwise. Perhaps in response to this year’s widespread anti-authoritarian stirrings and some Chinese activists push to have their own ‘Jasmine Revolution’ in imitations of Tunisia’s successful change in power, the Chinese government has begun a crackdown on political dissidence. According to the Guardian 21 year old Wei Qiang was sentenced to two years of hard labor this Tuesday for participating in pro-democracy protests this winter and veteran activists Liu Xianbin, Ran Yunfei, Ding Mao and Chen Wei have all been “formally charged with inciting subversion of state power”. The punishment for this offense is now 10 years of hard labor  instead of 3.

All around the country dissenters are being taken in for questioning and internet censures are tightening. Draconian silencing of protesters is nothing new in China but Weiwei’s sudden detainment brings an unprecedented degree of attention to the proceedings. China is making a bold and costly statement about personal freedoms as the international communit . Officially France and Germany have already called for his release and this coming Thursday MEP’s will deliberate further action by the European Union.

Weiwei is known globally and has worked in a number of mediums including film and sculpture. As of late he has received the most attention for his immersive installations like the Tate exhibit and for his architectural work. China did not hesitate a few years ago to tap into Weiwei’s status and talent, commissioning the artist to design Bird Stadium, the center of the 2008 Beijing Olympics.

Though he has always blurred the line between the two modes, Weiwei’s role as political critic has become as important as his artistic work in recent years. Weiwei is a huge proponent of the internet saying in one interview “The only thing I can in China is go on the internet”.  Weiwei uses his twitter, perhaps as intensively censored as it is widely read, as a platform to criticize the Chinese government.   Despite the government censors working hard to remove Weiwei’s name from all news and social networking sites,  supporters continue to discuss his detainment and thoughts through slight alterations of his name. One of the more popular permutations “Ai Weilai” roughly translates into “love the future”.

In more established venues Weiwei’s comments maintain a similar candor, stating in an interview with the Guardian: “We can see that China still cannot offer any real value to the world besides its slave labor its manufacturing and its own kind of stability. Besides that I don’t see any kind of creative values and creative mind, thinking that can be announced from China.  So this is the struggle China has to face in the next decades, but all of us need China to have a more reasonable political structure.”

In the past Weiwei’s status and lineage (he is the son of the lauded modernist poet Ai Quing) have afforded him a degree of immunity. He has always maintained that despite problems and past tiffs with the government he would never move out of the country unless his life were at stake.

At the time of print the events are still unraveling and Chinese authorities remain reticent about Weiwei’s status. Colleagues and family members of Weiwei continue to be brought in for questioning.