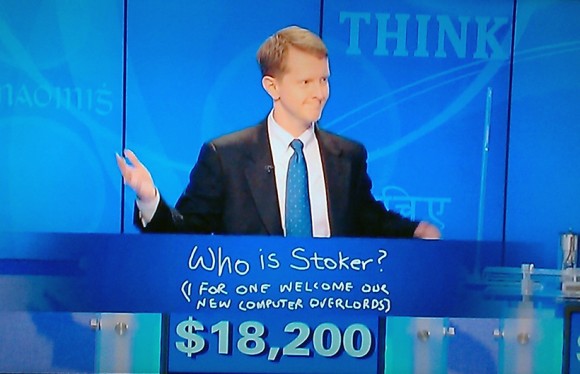 “I for one welcome our new computer overlords,” read part of former Jeopardy! champion Ken Jennings’ answer for Final Jeopardy! on Feb. 16 after losing an exhibition Jeopardy! match against a computer. With the three day match complete, IBM’s deep question and answer supercomputer Watson won Jeopardy! with a total score of $77,147, besting Jeopardy! champions Jennings and Brad Rutter’s respective scores of $24,000 and $21,600.

Just over three years ago, IBM approached Jeopardy! with the idea of having a computer face-off against two human contestants. The culmination of the computer giant’s proposal was Watson, a supercomputer built by a team of 48 IBM researchers.

Watson, named after former IBM president Thomas J. Watson, was too big to fit behind the contestant lectern and was represented by an avatar featuring an on-screen globe with lines racing across its surface based on IBM’s “smarter planet” logo. The speed and color of the lines had 27 variations depending on Watson’s level of confidence and reaction to the outcome of its answers. Watson’s avatar looked vaguely familiar almost like a digital Eye of Sauron or HAL from Arthur C. Clarke’s 2001: A Space Odyssey.

“Right, the circular Watson avatar looks a *little* too much like HAL’s red light, right?” Jennings wrote in a Washington Post question and answer session. “I think it’s reading Brad’s and my lips. When anyone mentions 2001 to them (or Terminator, or Matrix, or Tron, or…) IBM prefers to bring up the helpful question-answering computer on Star Trek. C’mon IBM! You just invented SkyNet! Own it!”

The match was held at IBM’s T.J. Watson Research Center in Yorktown Heights, N.Y. in order for Watson to participate. IBM constructed a mock Jeopardy! set within their research center just for the event with Watson’s avatar displayed on a screen sandwiched between Jennings and Rutter. In another room within the IBM research complex stood Watson’s bulk, powered by 90 linked servers, 2,800 processor cores and cooled by two refrigerators. Even more impressive is that Watson is not connected to the Internet and must rely on 13.6 terabytes of information stored within its memory.

Not being able to see or hear, Watson received questions via text files sent to it at the same time the question was revealed to its human counterparts. As the questions were read aloud, Watson’s avatar would light up as it analyzed the question and racked its 13.6 terabytes of memory for the correct answer. On screen, an overlay showing Watson’s top three choices and its confidence level in each of them would appear. If Watson was confident enough in its answer, it would ring the buzzer with a mechanical button-presser set on its lectern.

Watson’s lightning-fast speed at ringing the buzzer could be construed as an unfair advantage, but Jennings and Rutter often rang in first, particularly during the “Actors Who Direct” category — even when Watson was confident in the answers for each question.

“Ultimately, this is being portrayed as a human-vs.-computer competition and there are some things that computers are going to be better at than humans and vice versa,” IBM Watson researcher Eric Brown told Wired in an interview explaining its buzzer ringing edge. “Humans are much better at understanding natural language. Computers are better at responding to signals […] That said, humans have the ability to ring in just as fast has Watson does. In our experience the best Jeopardy! players time their attempts to ring in. ”

Despite Watson’s perceived speed advantage, there were some hiccups in its answering capabilities. In one instance, Watson repeated the same answer just seconds after Jennings had shown that it was wrong, its speed unable to make up for the lack of ears.

Another of Watson’s slip-ups came during a Final Jeopardy! question under the category of U.S. Cities. “Its largest airport is named for a World War II hero; its second largest, for a World War II battle.” Both Jennings and Rutter answered correctly with “Chicago,” but Watson answered “Toronto?????” indicating a low level of confidence. Fortunately for IBM, Watson only wagered and lost $947, showing its ability to hedge its bets.

Ultimately, Watson came in first place, winning IBM $1 million in prize money that the firm donated to charities World Vision, a humanitarian group, and World Community Grid, a collective supercomputing effort. Jennings won $300,000 and Rutter won $200,000, both donating 50% of their winnings to charity.

IBM also took the primetime slot to explain how Watson was made, how it works and how they made it possible with short videos. The video clips were not only informed the audience of how Watson came to be, but effectively acted as an advertisement.

Jeopardy! contestant Jennings felt the video resembled an infomercial. “In addition to giving IBM a nice infomercial spot (if you buy a Watson 1.0 license for home use, you also get a Watson mouse pad and some steak knives!) the documentary spots help explain how the contest came together, why this truly represents an AI breakthrough and so forth,” Jennings wrote on the Washington Post’s website. “It reminds me of the ‘human interest’ stuff that always clogs up Olympic footage. Revealed tonight: Watson hopes to win these games for its adorable little sister, who has leukemia!”

Although Watson’s win was an equally big win for both computer technology and public relations for IBM, the computer manufacturer felt humanity was the biggest winner.

“Humans win!” exclaimed IBM’s website after Watson’s victory. “The challenge is over. Watson, Ken Jennings and Brad Rutter concluded their final round of Jeopardy! and the winner was… resoundingly, humankind. Watson’s advances in deep analytics and its ability to process unstructured data and interpret natural language will now be applied to humanity’s most vexing problems. If we can teach a computer to compete on Jeopardy! what could it mean for science, finance, healthcare and the future of society?”

The Catalyst wouldn’t go as far as IBM and bill Watson’s win a “victory for human kind.” It’s important to remember that Watson is a specialized machine. Watson is great at playing Jeopardy!, but it can only play Jeopardy! As it stands now, Watson would have to be programmed and fine-tuned for other kinds of decision making. Successfully finding cures to diseases and executing world domination aren’t in Watson’s immediate future.

However, the speed at which Watson made accurate decisions does demonstrate a significant achievement in computing and signifies that the fundamentals are in place to make other applications possible. In an all of three to eight seconds, Watson had to analyze a question in plain English, decide what was being asked, search its memory for the correct answer and buzz in. A human armed with an Internet connection and the same time constraints would be hard-pressed to do as well as Watson.

Watson’s not about to take over the world — let’s see it grow arms and legs first — but it is a notable milestone in computing history.

The Washington Post and Wired.com were used as sources for this week’s Tech Talk.