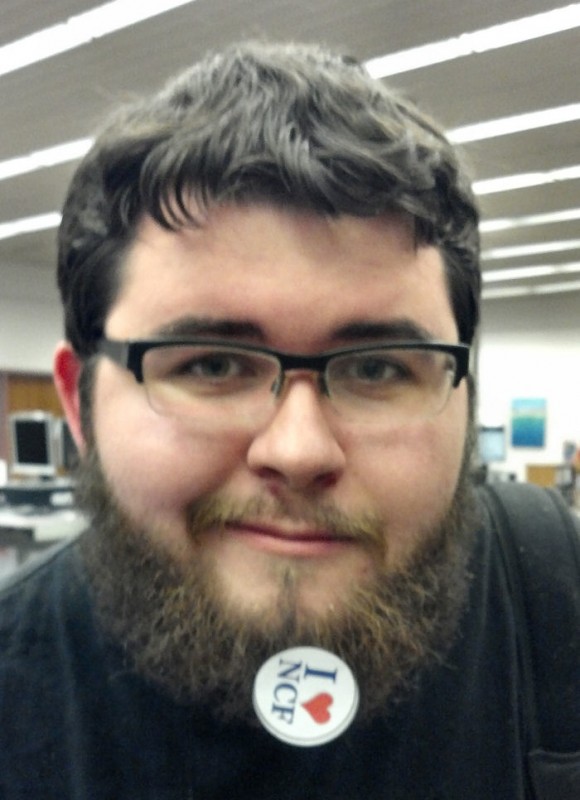 Thesis student Oliver Peckham is caught walking around the library with a sticker in his beard.

After the on-campus teach-in that took place Feb. 14, it was noted that some New College students felt out of place amidst their peers for a variety of reasons. First-year student and Catalyst writer Cassandra Corrado, with the help of New College Student Alliance (NCSA) President, Mike Long, decided to try and mend the situation by beginning the “I <3 New College” project.

“We want to remind people why they’ve come [to New College]”, Corrado said.

Another goal of the project is to give everyone a way to contribute to the campus, because according to Corrado, it can be hard for students to feel active if they’re not members of the NCSA. Thanks to the project, students are given the opportunity to be as productive as they want. Initially the group was made of 15 members, all of whom were chosen and contacted by both Corrado and Long.

“We talked to students who we knew wanted to help,” Corrado said.

Some members could not dedicate as much time as they originally wanted, either because of finals or thesis work, but any student can contact Corrado if they’re interested in participating with the project. Members are encouraged to come up with their own individual activities or events under the umbrella of the “I <3 New College” organization. For example, on April 15, Corrado co-hosted a poolside barbeque along with second-year Johanies Santiago and first-year Gabriel Monterrosa. Corrado said over 100 people showed up, and extra food had to be bought just to accommodate everyone. Thanks to Long, money was even donated for pool toys to be purchased (which can now still be found at the fitness center.)

Tentative future plans include free massages during lunch in Hamilton “Ham” Center by students of nearby massage therapy institutes, as well as t-shirt designs and a mural to be painted on one of the outside nook walls. Perhaps the biggest plan in the works is one many students may have read about on the little sheets of paper placed in their mailboxes just a few weeks ago. The papers, which included “I <3 New College” stickers, came with instructions: to put the stickers on a favorite part of campus, whether it be a building or a member of the New College faculty or staff (there was a disclaimer at the bottom of the instructions to be courteous when thinking of locations for stickers, such as statues. Stickers should be placed on the ground near the statues rather than on the statues themselves.)

Students who take part in this activity are then supposed to take photos of where they’ve placed the stickers and send them to ilovenewcollege@gmail.com, after which they will be posted on the group’s tumblr page, which already has over 50 followers.

“Once we have enough pictures, they’re going to go on a wall in [the ACE lounge] as a photo mural,” Corrado explained. “The mural is going to spell out ‘I <3 NCF’.”