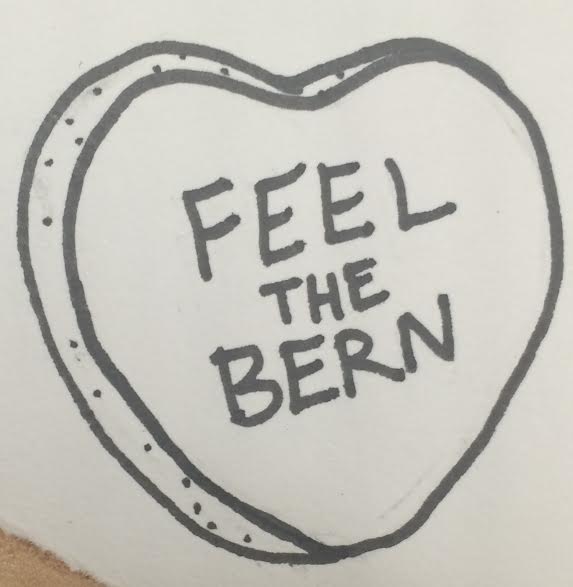 Tired of being alone every Friday night, but can’t stand how “Ready for Hillary” or eager to “Make America Great Again” all the eligible singles are on Tinder or OKCupid? You might be in luck. A new dating site, BernieSingles.com, caters to those seeking both romance and democratic socialism.

Being a single, far-left-leaning woman myself, I decided to give it a shot.

I signed up for the month-old site, built simplistically through WordPress, uploaded my most alluring selfie and added my basic information to my profile: location, age, astrological sign, etc.

The first came from someone by the name of “Val Jean,” a 50-year-old man from Wisconsin.

“Any friend of Bernie should be a friend of mine. Hey there pretty lady,” he messaged me, including a winking emoji.

A bit out of my age range, I explored my other options.

Though I indicated that I was attracted to all genders in my profile, I was only contacted by men.

I was messaged by John, a 30-year-old Virgo from New Jersey who loves to play the online virtual reality game Second Life. I asked him what brought him to Bernie Singles: “lookin for a girlfriend and to spread the love about Bernie,” he replied. He then asked if I was looking for a boyfriend, to which I explained that I was a journalist working on an article. “Oh ok,” he said. I expected the conversation would end there. Much to my surprise, he messaged me again a night later, but “baby” is all he said.

After a few days, my prospects were looking a bit slim. In fact, I had a much easier time talking to one of the site’s creators, Colten Caudle, than I did with users upon the revelation that I was a journalist.

According to Caudle, who is only 19 years old and studies political science at Arizona State University, the website became popular immediately. “We got 1 million hits and 1500 signups in the first couple hours we launched. We now have about 12,000, with 500-2000 users joining per day,” he said in a Facebook interview.

The site launched in early February, so plans for expansion are still in the works. “We plan on keeping the website up as long as Bernie Sanders is in the presidential race! We have several ideas in the works, including selling merchandise and making a mobile app,” Caudle said.

“At first I just thought people were joining and the media was picking it up because it was this ridiculous idea, but after seeing people on the website connecting it was really rewarding,” he added. Caudle states that there have been numerous successful matches made through the site, though he doesn’t have any concrete information available.

The site functions much like any other dating site, albeit with fewer features and navigability. While there are some dating sites specifically for Democrats and Republicans, and other dating sites may ask for political views, BernieSingles.com appears to be the only dating site dedicated solely to a specific candidate.

Your options for interacting include instant messaging and a more formal email function, as well as forums and chat rooms pertaining to interest groups you can join. Some of the groups include “Pagans for Bernie,” “Stoners for Bernie,” “Dank Memers” and numerous state-specific groups.

While most of the members of BernieSingles.com are predictably from the United States, there are a surprising number of international members.

One that I spoke to was Daniel from Norway. He was 18 years old and though I am typically not interested in younger men, his Nordic identity drew me in. I asked him why he was using the site despite being unable to vote for Bernie. “It’s kind of funny how Bernie indirectly brings people together in form of the dating site BernieSingles.com. It appears as if a surprising amount of his supporters are attractive and/or nice,” he said. Daniel primarily uses the site to make new friends. In our time talking, Daniel became an administrator for the site.

He explained how being from Norway aligns him with Sanders’ politics: “As I live in a democratic socialist country, I know how much you Americans could benefit from ‘free stuff,’ also known as well spent money from personal experience. I think Bernie Sanders is the best choice for president because he undeniably has consistent policies and views. His policies are also in favor of increasing the American people’s life quality and the living standards in general.”

Daniel and I continued to chat, sharing a mutual fondness for memes and Black Sabbath. “Assuming you’re single, you should marry me for a citizenship and move here if Trump wins (god forbid),” he said over the instant messenger function of the site. “If you some time did come, I’d take you for a cruise along the coast of Norway with Hurtigruten and to Iceland to see the geysers.” A rush washes over me. Is it love that I am feeling? No, no – I’m feeling the Bern.