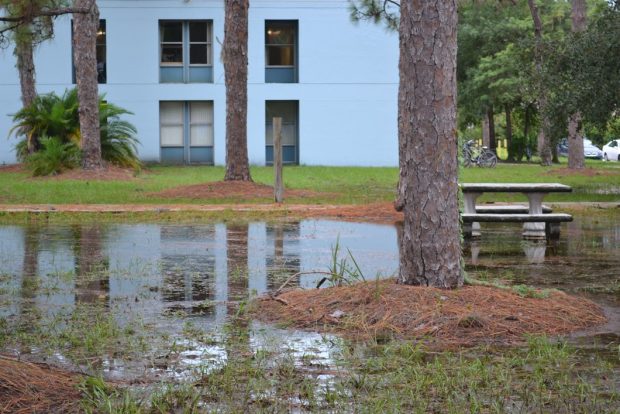 Hurricane Hermine flooded dorm rooms, shut off the power in residential buildings and left campus covered in debris. Originally, administration decided that New College should remain open on Thursday morning, contrary to Scott’s declaration of a state of emergency. In response, students – led by third-year Laura Herzog – created a petition to demand that classes be cancelled as students with disabilities were having issues getting to classes. Students who live off-campus also faced issues; with police escorts ushering residents out of local neighborhoods and parts of downtown Sarasota flooded while portions of Tamiami went underwater.

The school was officially closed as of noon on Thursday, with all non-essential personnel advised to leave campus. New College sent out an email at 5:00 on Thursday Sept. 1, stating that the National Hurricane Center had issued a Tropical Storm Warning for Manatee/Sarasota areas and that the area was expected to receive heavy rainfall, sustained winds in excess of 40 mph and the chance for isolated tornadoes.

Along with strong winds and heavy rains, there was flooding in both Pei and B Dorm, and there was a power outage in Z on Thursday night.

“Two weekends ago, when we first moved in, B Dorm lost power for a few hours on a Saturday,” said third-year Caitlin Ralph, a resident of B Dorm. “The reason was because an underground power line had to be fixed and B Dorm, along with the other Palmer buildings, with the exception of Palmer A, don’t have back-up generators. So, if the power goes out, like it did for about a half hour during the storm on Thursday night, B Dorm is without air conditioning, lights, or wi-fi.”

There was only one police officer on duty that night, and along with the problems posed by the power outages, four fire alarms went off.

“There was a really scary noise as soon as the power went out and I called the NCF police to let them know. The cop was like ‘all the dorms are dealing with power outages’ even though we could see that first court definitely had power, and then he said that they had bigger problems to deal with,” second-year student and resident of the Z residential hall Jason D’Amours said.

“The cop kept saying he didn’t know what to tell me and that it was a problem that had to be dealt with by FPL – then he hung up on me,” second-year student Brianna Luis said, another Z resident.

Florida governor Rick Scott declared a state of emergency in 42 counties on Wednesday. In a press release on his website, Governor Scott said “last night, hurricane and tropical storm watches were issued along Florida’s Gulf Coast from Pasco County to Gulf County. It is crucial that every Floridian has a plan in place to ensure their families, homes and businesses are fully prepared. By declaring a state of emergency in advance of this storm, we are ensuring that state, regional and local agencies can work together to meet the needs of our communities.”