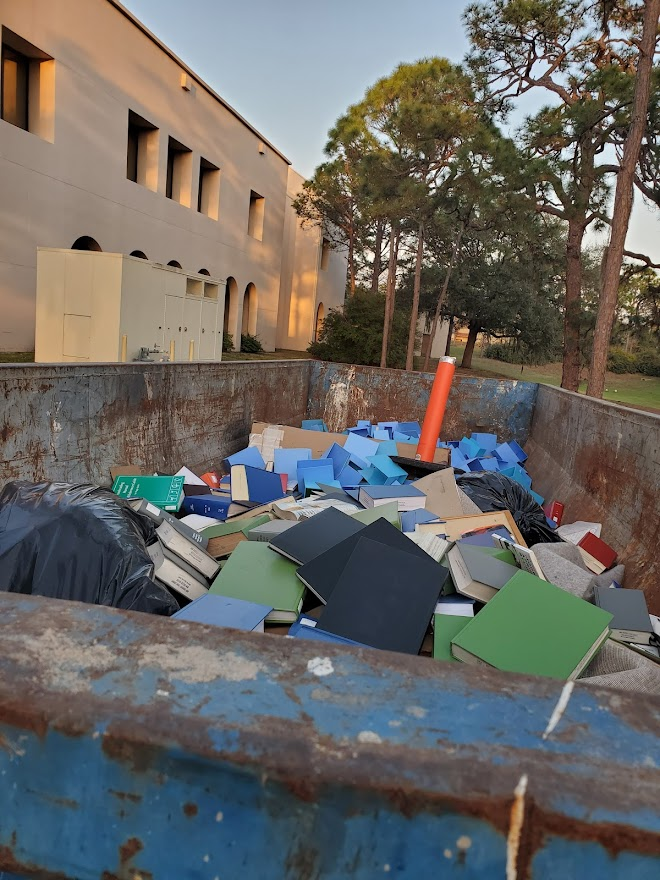 Magazines and journals filling up the Dumpster behind the Jane Bancroft Cook Library.

Students who use the back corners of the first floor of the Jane Bancroft Cook Library to study have likely noticed that the shelves of bound periodicals, which make up the majority of that left side of the first floor, have been slowly becoming vacant to make room for the expanded Career Engagement and Opportunity (CEO) Center. However, students may be surprised to learn that the new permanent home of these periodicals is the Dumpster in the parking lot behind the library.

Signage in Z-Green has indicated that the career center has moved to a modular unit in the neighboring Shell gas station parking lot. The CEO has been attempting to make some significant changes since Fall 2019 with events and resources such as career fairs and the inclusion of Handshake on each students’ myNCF portal. These initiatives are relatively new things implemented by the CEO, which mark a change for career counseling on campus in general.

In an effort to increase the amount of students who use the resources of the CEO—in terms of career advice as well as internship and job opportunities—the center has been working to expand and make a more functional space. This includes expanding their previous location in the back of the library in order to make room for new offices, classrooms and additional resource spaces.

CEO Executive Director Dwayne Peterson was excited to share with the Catalyst what the CEO has in store for the future. Peterson said that when he arrived at New College in 2019, the school was “receiving a lot of bad press about how a lot of students were not finding jobs within the first year of graduation,” a big issue for an institution that hopes to increase enrollment and retain students. The CEO was still in its early days of existence, and they were already showing signs that they were going to outgrow the space they were in.

“There’s not enough space in there for additional staff, which we needed because we want all of our students to have a personalized career advisor, and we want lots of employers visiting our campus, recruiting, interviewing, giving information sessions [and] giving presentations,” Peterson said.

The old CEO space in the library that most students are likely familiar with was not even fully up to the national standard for career counseling centers. With only around 1,600 square feet and temporary walls to separate out offices, sound proofing and privacy was a primary concern, as well as a lack of space to provide students with the resources they required, such as the career closet and event spaces.

Expanding was necessary, according to Peterson and the rest of the team, to provide students with all the resources they wanted to offer, but in the current space there was nowhere to expand to.

So, as early as 2019, Peterson began the process of designing an expanded space, but the coronavirus pandemic in Mar. 2020 forced plans for expansion  to come to a halt in order to work on more pressing matters. In Fall 2021, the CEO was finally able to resume the process and now in Spring 2022 the space is being cleared out in order to start what Peterson and the library staff believe will be a five-month construction project.

Peterson was very glad to share multiple pieces of concept art with the Catalyst, as well as a generalized plan of how the space will be built. While a lot of the specifics are subject to change, the space will include several primary features. Peterson explained that the lobby space will now be larger, more colorful and will include imagery “to demystify what happens in the career center.” Peterson put an emphasis on making the process of career counseling streamlined, easy and worry free for students.

“We want to show students who are doing things like internships and people who are going through advising appointments,” Peterson said.

The new center will also be very clear to see from the outside. The new entrance will be inside the office and include a lot of signage and marketing that will ensure students know exactly where to go—in comparison to the previous outdoor entrance, which was often confusing to navigate to. Additionally, Peterson was incredibly excited about the new classroom and interview spaces, which will allow the CEO to host more events. The classroom space is planned to be customizable: either be two small classrooms or one larger event space.

As the process of expanding the CEO has begun, the periodicals have been moved in order to properly make space for the CEO’s expansion. Not all the periodicals are being thrown away, many of them are simply being moved to be part of other collections—including on the second floor of the library—in an effort to not only provide space for the expanded CEO but also to make the first floor library space more accessible for studying.

The corner of the library once occupied by the periodicals is known as “The CEO lounge,” as it is an area which the CEO has furnished and set up for student use. The library itself wants to continue having a place similar to it in the future, as well as make room for collaborative project spaces – such as an expanded maker space and podcast studio.

“We are not removing books or bound theses from the library,” Interim Library Dean Helene Gold assured the Catalyst. “The bound periodicals (magazines and journals) that we are removing have been identified through a very specific process.” The library is getting rid of any periodicals “that are not current, are not used, are owned by many institutions, are available digitally and are not particularly unique or special.”

Both deans ensured that no information was being permanently lost by this purge of the library’s resources, but another concern was still raised. Why is so much material being thrown away rather than donated or recycled? Race was able to clarify that “any materials that are small enough to be easily separated from the binding” were being recycled, but much of the removed periodicals were still being tossed into the Dumpster. Other periodicals are also being shared with faculty members if they are seen as usable in a class project of some sorts.

“This project is in progress, including evaluation,” Interim Library Dean Tammera Race said in regards to which periodicals are being thrown away and how many.  “I’m happy to share what the collection includes after we’re done (likely next fall).”

Although, by a preliminary look into the Dumpster behind the library it is easy to see that there are dozens of volumes from many different journals being thrown away in this process. Some examples include: Canadian American Slavic Studies, Current History, Current Digest of The Soviet Press, Slavonic and East European Review, China Quarterly, World Today, Slavic Review and Journal of Modern African Studies. Many more have likely been thrown away.

When the Fall 2022 semester rolls around, the CEO should be settled in their new location and the library’s project of cleaning up their collections should be finished. The final amount of periodicals that will be thrown away will thus be unknown until the project is completely finished.