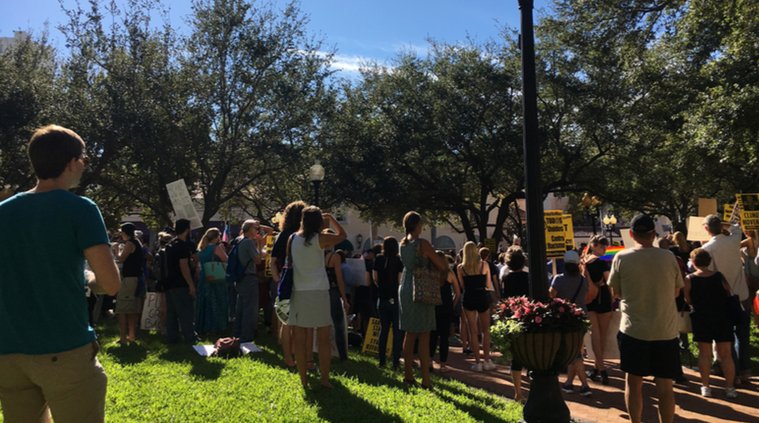 Following the announcement of Donald Trump’s victory at the Nov. 8 election, members of the Sarasota community quickly came together to organize a peaceful public declaration of their stance against his presidency, in what became one of the largest protests in recent Sarasota history.

Vee Matalau and Nate Quinn, both recent graduates of local Sarasota high schools, Booker High School and Pineview High School respectively last spring, together helped coordinate an emergency protest that occurred at Five Points Park in downtown Sarasota on Saturday, Nov. 12. “Join us in fucking it up and making a difference,” Matalau said during sign-making prior to the event.

The protest happened in the same spirit as numerous protests across the country since the announcement of Donald Trump as presidential elect on Wednesday, November 9th. Some of these protests, like ones occurring in New York City, have continued daily following the election. The focus of these protests covers a wide range of issues with Trump’s views and his plans for his presidency. Many of the protests focus on immigration and deportation, racism, sexism, LGBTQ+ safety and rights, the environment, and class issues. Despite the varying issues that some protesters focus on, there remains unity in the protests themselves. While the vast majority of protests have been peaceful, there have been reports of fires and smashed windows in places like Portland, Oregon.

Numerous cities across Florida have held protests since the election, including Jacksonville, Fort Lauderdale, Miami, St. Petersburg, West Palm Beach, and Tampa. According to Fox News 13, a heated confrontation occurred in Ybor City during the Tampa protest when protesters encountered members of the Marine Corps on a pub crawl to raise money for Wounded Warriors, an organization that donates money to veterans who were wounded in combat and their families. No arrests were made in that protest, though hundreds of protesters have been arrested across the country.

Meanwhile, there has been a rise in hate crimes, harassment, and  violence against minorities since the election. As of Friday, November 11 at 5pm, the Southern Poverty and Law Center, which tracks hate groups and hate crimes, counted 201 incidents of election related harassment and intimidation across the country. Anti-black and anti-immigrant incidents were most common, with anti-Muslim incidents following. K-12 schools were the largest venue for these incidents. ThinkProgress.org reports that this amount is typically only seen over a five to six month period, yet occurred in just three days following the election.

At New College specifically, the student and faculty response to the election was overwhelmingly negative. On Veterans Day, Friday, November 11th, President Donal O’Shea, Provost Steve Miles, and Dean of Student Affairs Robin Williamson sent out a collective email calling the election “the most acrimonious campaign in recent American history” and stating that New College “will always stand for civility, critical thinking, and rational discourse.” The statement ended in saying that New College is committed to ensuring that all members of the community are safe and respected.

In light of this, the Sarasota protest against Trump was a peaceful and positive stand against the policies and discrimination of Trump and his supporters. Hundreds of people of all ages, including families with babies, marched together  through downtown Sarasota chanting “Not My President” and other slogans, then returned to Five Points Park for a range of speeches given by local activists representing Black Lives Matter, the Party for Socialism and Liberation, as well as LGBTQ+ and Latinx communities. The Party for Socialism and Liberation and ANSWER Suncoast (Act Now To Stop War and End Racism) had a table during the speeches, where they provided information about upcoming events, offered a sign-up list for emails about said events, and sold t-shirts and literature.

Throughout the march and the speeches, there was an emphasis on eliminating hate. Though there were brief moments when members of the crowd would chant “F*ck Donald Trump,” this was quickly toned out in favor of positivity and focusing on how people can continue to combat hate.

The event saw an increased police presence within downtown Sarasota, though no arrests took place. At the time of the event, the entrance to Fruitville Road off US-41 was blocked by police cars. It is unknown if this is directly related to the protest. The event furthermore received news coverage from a variety of major local sources.

ABC 7 WWSB MySuncoast reports that over 200 people attended the event, including one Trump supporter who came to hand out water to “show them that we’re normal people who want to see the best for our country just like they are.”

Quinn, who is known for his activism for trans rights at Pineview High School, said after the event that he was proud of Sarasota: “Sarasota went red but it doesn’t look like it from this crowd.”

Quinn was inspired to help coordinate the protest in light of his previous activism for trans rights in the Sarasota area. He spearheaded “Nate’s List,” a list of trans-inclusive policies to be implemented in Sarasota County schools. Because of this campaign, Quinn knew there would be people who wanted to protest against Trump’s presidency.

“I think everyone that hates Trump needs to come together,” said Quinn.

As for Matalau, she was inspired to plan the event as a way to “keep breathing.”

Third-year Hannah Procell reiterated Quinn’s sentiment: “It was so powerful to be there on Main Street sending out peace signs and chanting […] it was extremely empowering.”

There will be more events in the near future to stand in support of the groups represented at this weekend’s protest, with a Black Lives Matter protest being held in Bradenton on Saturday, Nov. 19 against local police discrimination. There will furthermore be a protest in Tampa supporting an increase to the minimum wage. Answer Suncoast will be providing transportation from Sarasota to those who are interested.

“History takes attendance,” Procell said. “This is the kind of start we need to keep momentum, to not lose sight of the fact that everything is possible if we do it together.”