A chorus of supportive car horns accompanied, “Hey! Hey! N-R-A How Many Kids Have You Killed Today?!” at the local Sarasota March for Our Lives.

An estimated 7,000 protesters congregated at Bayfront Park on Mar. 24 to listen to the children of the Sarasota-Manatee county speak on gun control. With the ever-growing number of mass-shooting terror attacks, students took the lead organizing the protest as an official sister-march of the March For Our Lives in Washington D.C. 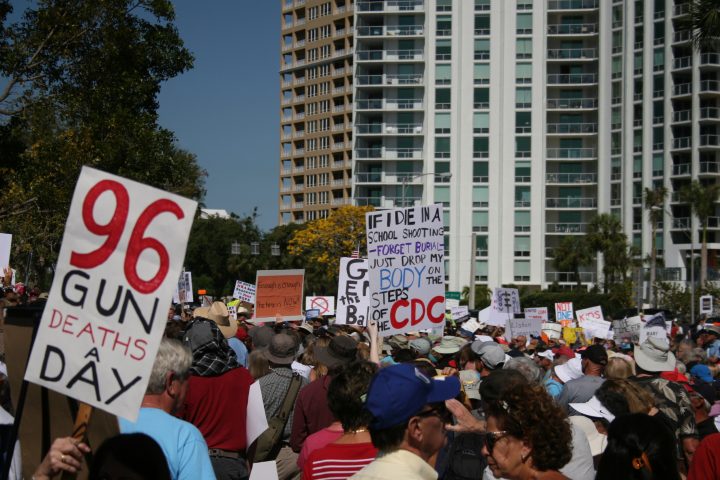 While the speakers ranged in age from 10 to 18, the crowd turnout was diverse in terms of age demographics. Infants, local students, parents and grandparents flooded Bayfront Park. Between speeches at the Sarasota demonstration, the masses shouted one message: vote.

One student speaker noted: “My parents moved here from Russia because they couldn’t vote to change their situation, but here, we can.”

But even with this voting ability, the march was not unified on an important matter. There is an insidious fact that was not discussed as much as it should: the role of white supremacy in these terror attacks.

Variances in sign messages at the local demonstration indicate that there is an age gap in understanding this issue. Younger students used signs to call out the KKK, while older protestors wore pink pussyhats and ignored it completely.

It is dangerous to not include the protest of these groups because White men are by far the largest shooter demographic in the United States. Wearing a MAGA hat with swastikas etched onto his ammunition magazines, Nikolas Cruz is a perfect model of who is shooting up schools and public spaces. These facts not making it into the speeches or majority of the signs, and not calling Nikolas Cruz a terrorist flat out sends the message that White privilege is alive and well, even for shooters. 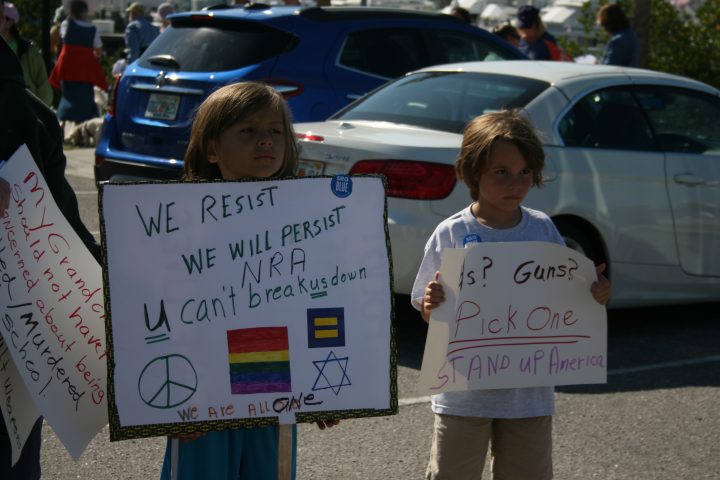 White privilege also has a role in survivor representation and screen time, but once again this is not as lost on younger generations. The students of Parkland most shown in the media have commented on this and their own White privilege which will hopefully open up future protests to a wider range of voices and experiences. This is an overlooked, and yet crucial part of the gun control agenda.

In the local Sarasota march, two young students of color spoke back to back in turn with all the other students, but the mic cut out only during both their speeches. The mic was fixed after they gave up and let the next kid speak. This felt almost emblematic of our nation’s problem of silencing/not acknowledging the voices of our country’s most marginalized group, women of color. Not to mention the lack of national support that students of color in the Black Lives Matter movement, who have been calling for gun reform for years, have received compared to the support that the White Parkland students are receiving now.