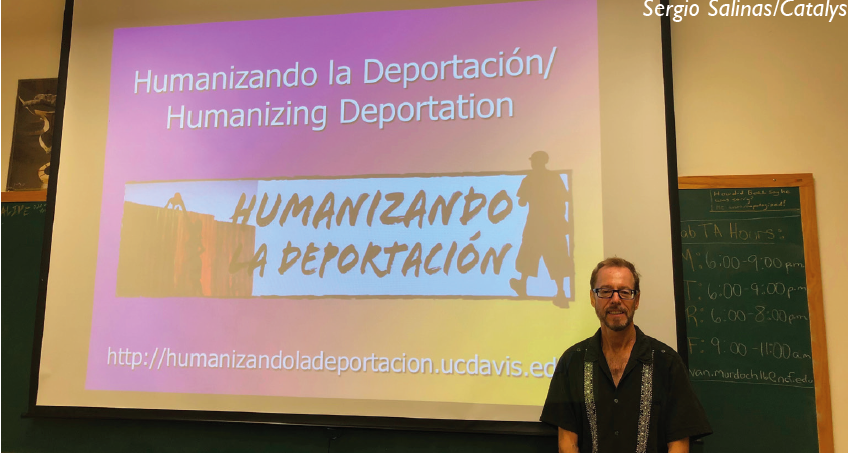 On Sept. 16 New College welcomed Robert McKee Irwin, Professor of Spanish and Portuguese from University of California, Davis. Irwin is the Project Coordinator for Humanizing Deportation, an organization that serves as a digital archive for the personal stories of people affected by deportation. The goal of Humanizing Deportation is ultimately to provide human experience into a primarily statistical-driven discussion about immigration policy.

“I think that the political exigency of the archive, regardless of whether they’re people telling stories of injustice in a very clear way or if their stories where people may be admitting to criminal antecedence or whatever; the deep humanity that is expressed in the stories there is really, really important,” Irwin said.

Irwin works to capture stories through digital storytelling, a form of expression that consists of pictures and personal narration. The Humanizing Deportation archive of stories holds over 200 videos of people’s personal experiences, making it the largest qualitative archive about deportation. The archive is divided into subcategories ranging from country of origin to the feelings expressed in the stories to allow for a deeper analysis of the effects of deportation.

“This allows people to see what’s really happening beyond very limited media coverage, the kind of political tweets and other bits and pieces of information that come out,” Irwin said.

Humanizing Deportation held two events on campus on Sept. 16: a workshop in the anthropology lab discussing the creation of the project and a public presentation in Ace Lounge. Irwin’s presentation included of stories like Desde la Caravana, a story about traveling with the migrant caravan in Central America. The videos Irwin shared often showed mixtures of emotions; stories of hope and fear would be contrasted those of hopelessness and bravery.

“Some of the stories are very tragic and very sad and they get told that way,” Irwin said. “But there are other stories of overcoming, so if somebody knows that their uncle is gonna get deported it might be something about sharing in the tragedy, one that’s been experienced by a whole lot of other people — and the archive shows that — but also maybe seeing through some of the stories people have managed to get their lives together in Mexico in ways they may not have expected that maybe will help them to advise their uncle.”

The Humanizing Deportation project offers a unique insight into the struggle of LatinX migrants from Central America. With the beginning of LatinX heritage month, New College is offering a variety of events to allow students to gain new knowledge of LatinX cultures. Third-year Marcela Prado Zapata, a student of Colombian heritage, is the main organizer for the upcoming LatinX cultural fair on Oct. 6. Zapata hopes to influence LatinX students to come out and display the vibrant cultures present at New College.

“The main reason we’re doing it is to represent the individual and very specific LatinX community we have on campus,” Zapata said. “We’re going to have instruments, traditional clothing, [and] music from all kinds of backgrounds.”

LatinX identity can be tricky to place, as the term “LatinX” covers a broad and diverse group of people with different cultures. Maintaining the identity as an individual from a Latin American country can be difficult; in the United States Latin American people get lumped into one singular category. A cultural fair displaying the different foods, music and cultural aspects of Latin America plans to give a fresh perspective to students looking to expand their knowledge of the LatinX community on campus.

“I’m trying to show the individuality of all the different [LatinX] cultures on campus even though were all [LatinX], were very different in a sense,” Zapata said.