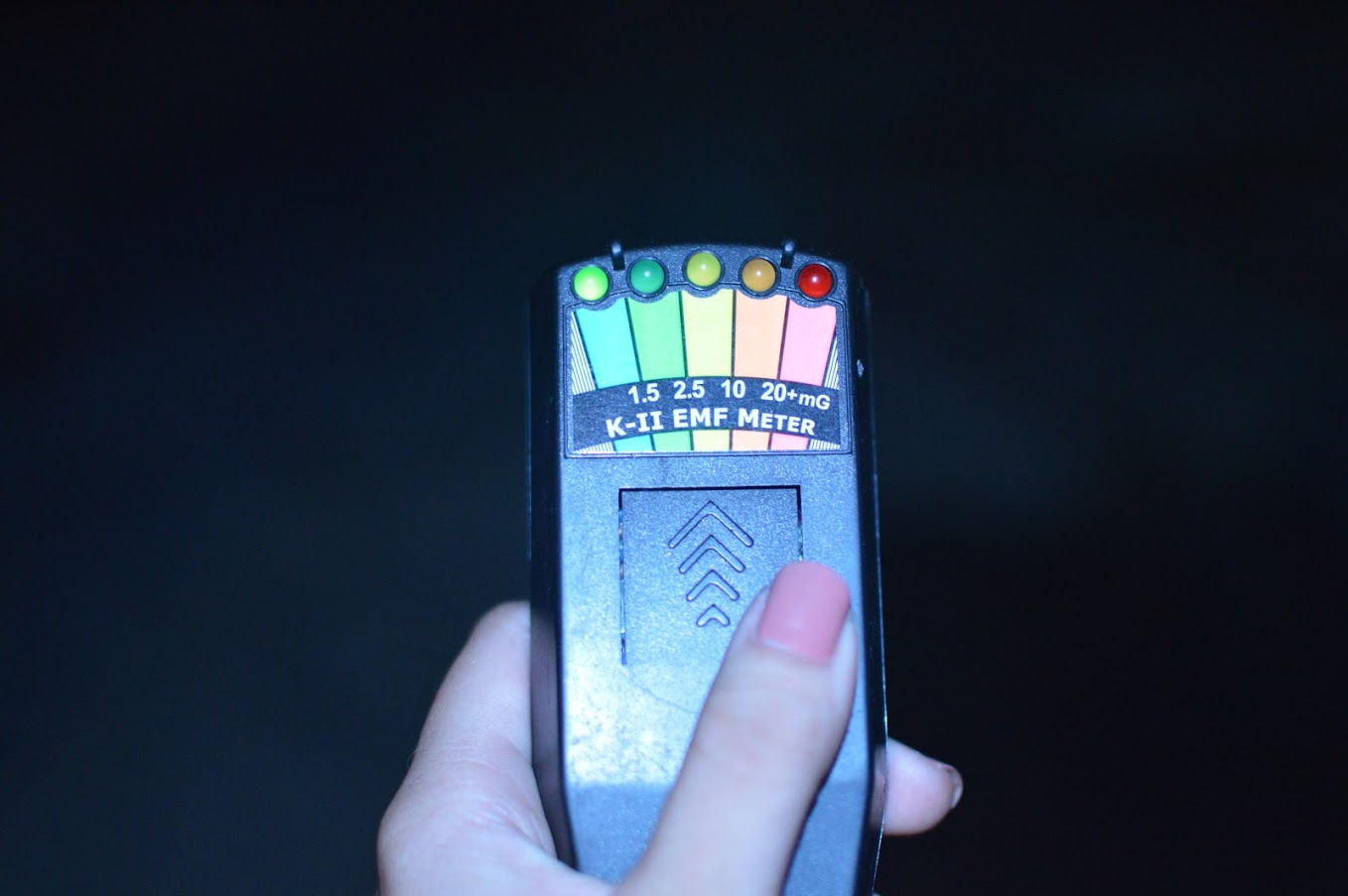 One of the EMF monitors the team uses to communicate with spirits.

“If you’re an asshole in life, you’re an asshole in death,” Liz Reed, a founder of the Paranormal Society of Bradenton, said when asked about demons. “I always tell people, because a lot of people think their houses are being haunted by demons, spirits are just normal people and their characteristics go with them.”

Reed is the founder of the Paranormal Society of Bradenton. I sat with her and two other members of the team, Kim and Brandon Bassett, at Reed’s home in Bradenton for an interview. Reed started the Paranormal Society with her husband seven years ago. Since then, they have investigated countless places around both the Sarasota and Manatee counties. They have maintained a strong history with New College campus.

“We’re the only paranormal group in the world that’s done the whole block of John Ringling’s,” Reed said. “By the way: Ralph Caples? He’s a little flirt.”

Ralph Caples and his wife, Ellen Caples, lived in what is now New College’s campus on the south side of Ringling Museum. Upon her death in 1971, Ellen Caples bequeathed their property to New College. Today it is home to offices of professors, the sailing club, the arts building, the organic garden and, according to the Paranormal Society, the friendly ghosts of the Caples family.

“There’s a lot of activity there,” Reed said while recounting an experience she had with her team on Caple’s property.

“The front door–you know how heavy the Caple’s doors are? Opened,” Reed said. “My husband thought it was security so you see him get up, because there is a camera that is kind of positioned, but he’s in it, and you see him at the table, and you see a shadow sitting across from him and they both get up at the same time.

“My husband walks away with the flashlight, the shadow sits back down. Somebody sat across from him the whole time.”

Another time, Reed was sitting next to Andrea Niles, New College’s Assistant Director for Community Engagement during an EMP session.

“I’m so fascinated by it I just want to know what is out there,” Reed said. “We do it whenever we’re needed. We do investigations for free, we work on donations only.”

Though the team has a healthy dose of fascination with the paranormal, they make sure their work is as legitimate as possible. There have been false alarms where people have called them in hopes of being on TV. They see the jobs where their clients are mistaken to be very useful for keeping the team sharp.

Mrs. and Mr. Bennett spoke extensively on the precautions and rules of communicating with the paranormal.

“You never do an investigation by yourself. You always have a buddy that way if you get in trouble there’s always someone there to have your back or call for help,” Mrs. Bennett said. “You never know what you’re going to run into.”

With pictures, it’s important to blow them up on the computer first before claiming anything substantial. Reflections in pictures can be misleading.

“You might think you’re getting orbs or lights but you’re just getting reflections from metallic objects or light sources,” Mr. Bennett said.

“Using flashlights are important if you’re in a dark place but use it sparingly because if you’re using a camera it can distort stuff,” Mrs. Bennett said.

They suggest taking multiple shots of the same scene for the best evidence.

“We do get a lot of pictures people send in and some of them really do look like faces, but a lot of the time it’s nothing. You really have to check them,” Reed said.

Voice recorders are also quintessential to an investigation, but again the margin for error can be large if one isn’t careful in handling the equipment.

“You don’t want to rub your fingers on it or play with it,” Mrs. Bennett advises. “Lay it down–you want to make sure that whatever you hear is something and not you.”

Talking should be kept at a minimum, but Mr. Bennett advises to use your voice as a tool to coordinate happenings or clear up something that could be confusing later when going over the material from an investigation.

“If you got a recorder going and you start feeling something, say it. It’s important to record at what time things happen so you can coordinate your separate devices,” he said.

“You have to pay attention to what you’re around,” Reed said. Once, a recorder picked up a loud scream. The team was surprised because it was so clear to the human ear. Later, they found out a cow had been giving birth some ways away during their investigation and it had been the source of the scream. Sounds during investigations should be mentioned by an investigator in the recording in a clear normal tone so one knows later to disregard confusing noise.

“And most importantly: no whispering. If you whisper you might think you got something but it’s just you or your teammate,” Mrs. Bennett said.

Other rules include not wearing strong fragrances so as to keep the air clean of anything that may limit one’s ability to smell subtle scents and to put phones on airplane mode/off when using electromagnetic field (EMF) monitors.

EMF readers are important to investigations because they can be used to communicate directly with spirits using yes or no answers, according to Mr. Bennett.

“The theory is spirits are made of energy so they can interact with these devices. You can tell them to touch this spot if they want to answer yes, and back away if they want to answer no,” Mr. Bennett said. “Always follow up with additional questions because a sustained communication is really what makes for good evidence. A single flash of red after 20 minutes of questions, that’s really difficult to say what what that means if anything.”

Nowadays, there are a lot of apps for smartphones that can mimic a lot of the expensive equipment, allowing anyone to try their hand at ghost hunting, at least to some degree. Mr. Bennett is a proponent of the app “Ghost Hunting” and says it is a pretty useful EMF reader, though some of the other features can be a little finicky.

The team is favorable to people going out and doing their own investigations, but they stress the importance of safety and empathy for those who have passed.

“Usually we find that it’s trauma or they caused a tragedy and they have to answer for their guilt before they cross over. A lot of them will stay here because they’re afraid,” Reed said.

“Also keep in mind if you think there’s a spirit there from, say, the 1800s, they may not know what an iPhone is so you have to tell them to speak into the box. Spirits may not understand the equipment, especially if they have not interacted with a lot of people. Spirits can learn over time. It’s helpful to explain it to them. It might take them a little bit to learn how to manipulate those frequencies.”

The most important thing the team said was this: “We do not encourage the Ouija Board.”

“Once you open a portal anything can come through,” Reed said. Also, according to Reed, burning the Ouija board is a very dangerous thing to do if you haven’t closed the portal yet.