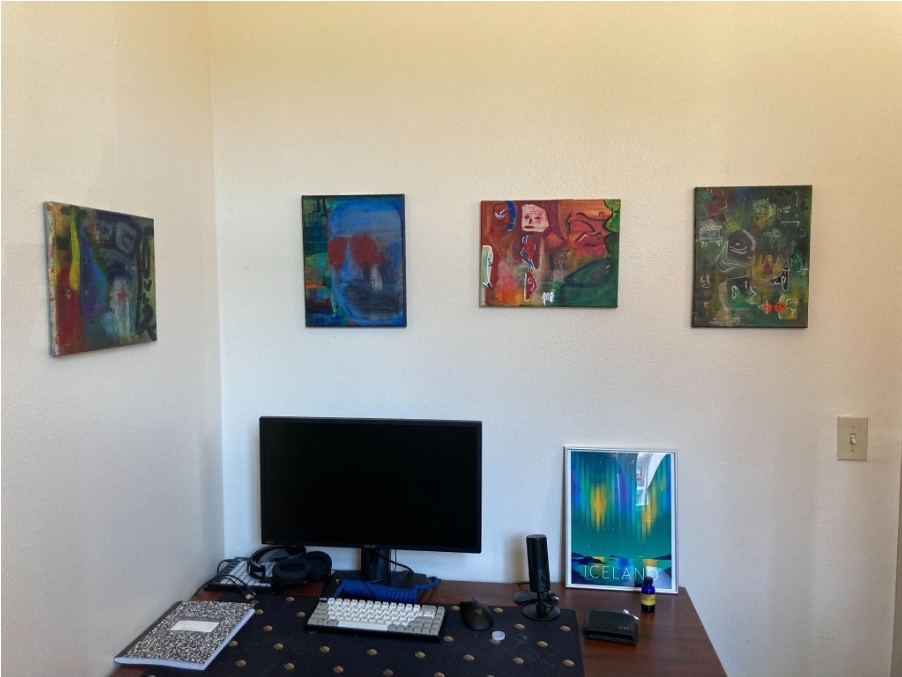 Joseba Maruri’s desk, with his artwork above.

Dorm rooms can feel sterile and stultifying when one first arrives at New College, with barren anemic walls and frigid floors, the space in between formulaically stocked with mass-produced furniture. To remedy this and the inevitable homesickness, many Novos dedicate much of their initial free time to personalizing their severely impersonal rooms. This process of encouraging homeliness in a cookie-cutter compartment is supremely intimate, as everyone has their own style and their own concept of home. Some people mount posters, others prefer tapestries; some bring rugs, others prefer the original flooring; but more fundamentally, everyone has their own unique souvenirs from their recently concluded childhood that they bring with them into the next chapter of their life. By learning about what home means to different students, New College’s diversity can be seen and appreciated.

First-year Joseba Maruri, who lives in the X Dorm, is from Miami and has been missing the big city since moving to Sarasota. One of his unique keepsakes is his Cuban coffee machine, which he uses daily. He has also brought an abundance of decorations from home and has bought more since he got here, but he is still struggling with homesickness.

“Although it’s not home, I try to make myself comfortable,” Maruri shared.

In trying to do so, he brought a memory foam mattress topper, his bright orange bed sheet, a matching orange floor pillow and several little rugs to make the room cozier than the cold, hard tile would otherwise allow. To cover the vast white walls of his dorm, he brought some posters but he has mostly relied on his paintings from home. These paintings give his room a sense of personal style that arguably can’t be achieved with a selection of other people’s art, making the room wholly his own.

“I’ve been told having my own paintings in my room can be a little bit vain and off-putting, but when I really think about it, I don’t care,” Maruri remarked.

Maruri explained that creating art without inhibition is the only way for someone to know who they are, for what a person does to the world when acting on their most basic impulses is the only way to identify the always evolving personality. Maruri compared personality to an electron: “by observing it, you change it.”

Maruri’s paintings are arranged above his desk and his bed. He has moved away from painting though and has been focusing on sketching, he said. That’s where his floor pillow and carpet come in: they’re the foundation of his drawing setup, allowing him to work with large drawing pads comfortably on the floor, as they are too broad to fit handily on his desk.

Important to Maruri, in accompaniment to engendering a sense of homeliness, was making his room feel and competently function like his own studio. A place that supports creativity, which is something the colorful bedspread, many posters, paintings and guitar and amplifier help with, as well as a relaxing atmosphere. Aided by his air purifier, deliberately casually suspended LED rope lights and singular plant—all of these items facilitate productive studying.

“By making art, I am able to re-imagine the atmosphere around me, therefore discovering personal nuance,” Maruri said. “It’s partly how I make the space my own.”

In order to achieve that relaxing atmosphere, he often uses his expensive speakers. Maruri said that music, especially Spanish music, is his favorite method to relax and feel more at home.

First-year Luna Vasques, who lives in Pei, didn’t have the same head start as Maruri. Unlike Maruri, who is the oldest of his siblings, Vasques was never able to have her own room as a kid since everything was a hand-me-down from her older sisters. She never even got to pick her own bedspread, she said. Because of this, she was very excited to make her dorm her own when she got to New College.

One thing Vasques did have personalized at home was her bookshelf, which she brought with her. Her bookshelf feels like a living village populated with Funko Pop! figurines—all but a few still in the box—some of her most cherished books and a handful of her favorite movies that she feels a personal connection to.

However, it is her desk that she is currently most focused on personalizing. Vasques arranged her desk below her bed and got to work customizing the wall space therein. She hasn’t finished yet, but she has started in the middle and plans to expand outward from there. All of her posters were bought—primarily on Etsy—since she arrived on campus six weeks ago. However, some posters she found on RedBubble weren’t available in the size she wanted. In order to satisfy her interior design ambitions, she contacted the artist directly and offered to pay them for the artwork and then print the posters herself at Walgreens, cutting the cost significantly while still supporting the artist.

Vasques’ next interior design mission is with a corkboard. She has bedecked the board with memories like polaroids, stickers and movie tickets. Vasques articulated the sentimental importance of movie tickets in particular to her since she started collecting them as mementos a few years ago.

“The movie tickets are the main thing that I wanted there because, well, I really like movies,” Vasques said. “Collecting [movie tickets] is something that’s very important to me. I wanted to have all the ones that I already had and like a place to put all the new ones.”

Third-year Avery Myers, who lives in Dort and Goldstein, has accumulated a bountiful wealth of decorations in their abode at New College, unsurprisingly far more than Maruri or Vasques. Myers has nearly eradicated all vestiges of their room’s woeful past with their elaborate and extravagant personal style. The walls are thoroughly ornamented with posters, tapestries, pictures and anything else they could manage to hang on the wall.

“I love my messy, overwhelmingly bright, obsessively personalized room,” Myers said. “Last year, I lived in the Z room overlooking the overpass, and I kept my colored lights on 24/7 and plastered the wall with decor even more. I really liked the idea that the glowing pink chaos that made me feel so at home was absorbed into the background of everyone else’s day-to-day New College experience. This year I don’t get to show off to everyone who walks down the overpass, but I’m still very happy with the atmosphere I’ve created.”

Each student who shared their room has their own style. For Maruri, it’s mellow and cozy; for Vasques, it’s based mostly around her favorite media; and for Myers, it’s bright and flamboyant. These differences exemplify the cultural and personal diversity of Novos. Simultaneously, their dedication to fleshing out their unique styles and bringing a little bit of home with them unites them in this diversity. New College is at its best when everyone passionately nurtures their creativity and individuality, as well as their peers’, celebrating the differences that make them and New College unique.