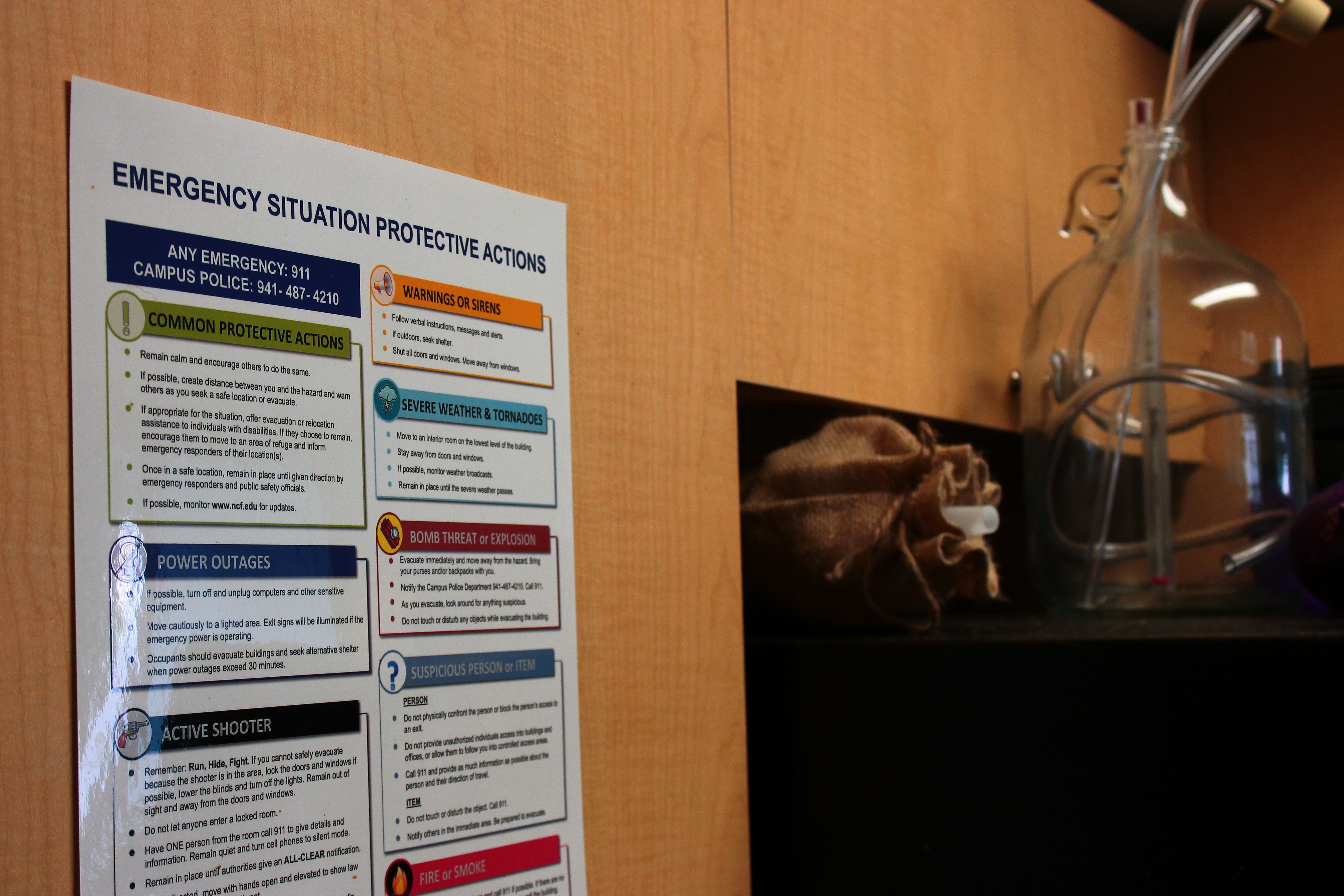 These posters were placed in residence halls and classrooms last year as a cooperative effort between the New College Police Department and the Department of Environmental Health and Safety. (Photo by Cole Zelznak)

“Since 9/11, that’s when the designations of emergency manager started coming into play [at universities]. So it started evolving since then, it had nothing to do with hurricanes, it had to do with the terrorist attacks and the active shooter things that just started happening,” Director of Environmental Health and Safety (DEHS) Ronald Hambrick said. Despite its roots in the War on Terror, the simple fact is that New College of Florida’s (NCF) emergency management infrastructure is most likely to be tested in response to an extreme weather event, not a violent attack.

Hambrick is the man largely responsible for the creation of the college’s Emergency Operations Plan (EOP). Hambrick is the college’s emergency manager, in addition to his other roles as DEHS. Florida law mandates that all state universities designate at least one executive employee for this position.

In 2004, the Federal Emergency Management Agency (FEMA) defined emergency management as the discipline of “dealing with risk and risk avoidance.” It’s a simple definition for a very complex job. FEMA, however, does not carry the entire load when events like hurricanes, tornados, or earthquakes take place. In ever greater numbers following the Sept. 11 attacks, numerous public and private institutions have followed FEMA’s lead in developing detailed plans in response to the risk of all emergencies, not just natural disasters.

New College of Florida is one such institution. In 2007, the college released the EOP, which outlines procedures, policies and command structures to be put in place in the event of an emergency. The emergencies named in the EOP include fires, bomb threats, extreme weather events, chemical or radiological incidents and public disturbances, such as mass demonstrations.

Students may question the usefulness of the EOP in the aftermath of Hurricane Irma, when miscommunications between the administration and the student body left some in confusion over the status of the Academic Center (ACE) as a hurricane shelter.

“There are a lot of emotions going into this, people are stressed, people don’t know what to do. They’re not getting the information they want to hear,” Hambrick said. “We talked about maybe changing the way communications are sent out. There were a lot of different communications coming in and going out.”

The EOP stipulates that an Emergency Operations Team (EOT), consisting of administrators and the heads of every department on campus, be formed in an emergency situation. Currently, the EOP provides no mechanism for student input on the decisions of the EOT during a crisis.

“Prior to [2007] it was a little bit piecemeal. There was a document in Student Affairs about what to do, things like that, but it wasn’t comprehensive,” Hambrick said. “We’re following the course of other universities.”

Hambrick began working as the DEHS in January 2007. He has worked in emergency management positions in the state university system for 32 years, and has completed multiple FEMA trainings. According to Hambrick, the development of an EOP was an important step in ensuring the safety of the NCF community during an emergency.

Hambrick and Dan Richardson, the Director of Human Resources, both members of the EOT, were confident that the administration’s response to Irma went as well as possible, excepting some unpredictable contingencies like a delay in the delivery of generator fuel. For Hambrick and Richardson, events like Hurricane Irma are a chance to build and improve upon the EOP.

“We have already met once with an after action report, and with the president and members of the committee to discuss […] what can we do better, what went right or what went wrong. Did it go wrong, or did it just go different? And are there things that we can do to make things better,” Richardson said.

In recent years, disaster preparedness has been a focus of the administration. In December 2015, the senior staff and safety leaders of NCF participated in an emergency planning training exercise. In March 2017, staff members observed and participated in a full-scale disaster simulation at the Sarasota International Airport. Over the summer, the New College Police Department and the Sarasota Police Department used Palmer B and ACE in a training exercise intended to prepare the officers for an active shooter situation.

The full text of the EOP is available on this page: https://www.ncf.edu/campus-life/health-safety-and-wellness-mind-body-and-spirit/environmental-health-and-safety/

Information on emergency management from FEMA.gov