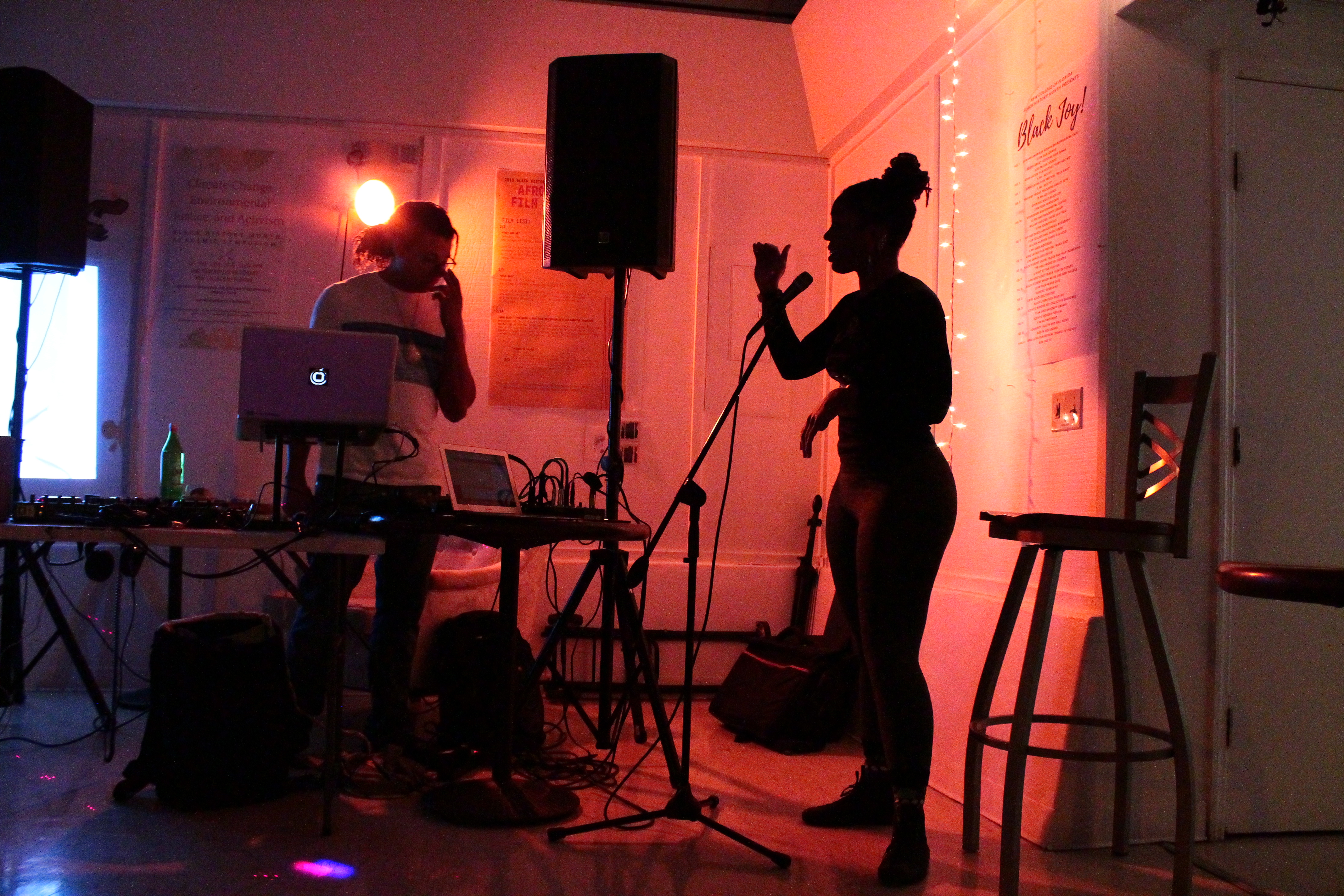 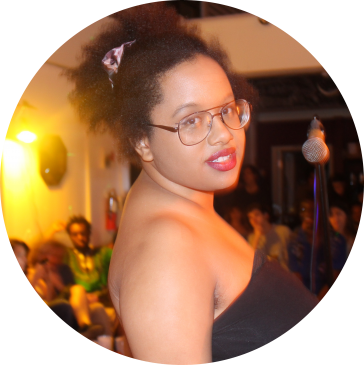 The author of this article has been involved in the BHMPC for three years. She is also the creator and lead photographer behind the As We Are New College Project. 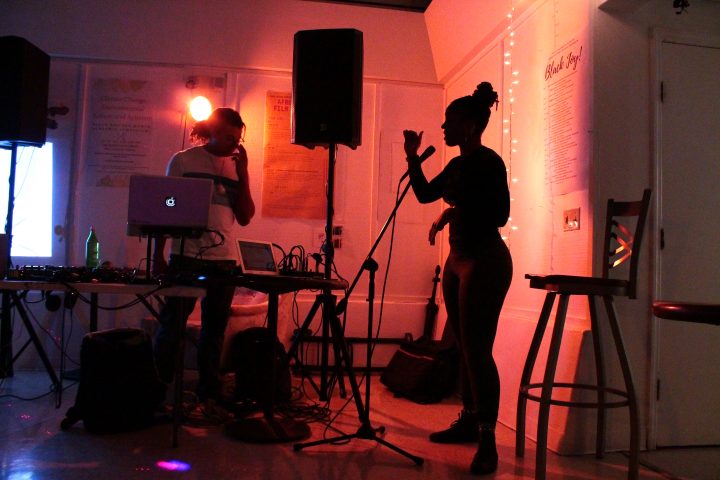 There once was a point where the words “Black History Month” and “New College” couldn’t be put together. This predominantly white campus has seen a shift in the last few years due to a collection of Black students and faculty determined to build their own community.

I crouched beside a table, camera in hand, as I watched student after student take the mic to recite poetry or freestyle to a beat. Although the faces of each Black artist who came up ranged in skin color, hair texture and musical vibe, the expression of the audience, who remained silent and watched their every move enraptured, stayed the same.

My co-host, thesis student Bree Nieves, had turned our student-run café, the Four Winds, into a dimly lit room with re-runs of In Living Color projected onto the walls and a spotlight on a pseudo-stage. This Open Mic Night was centered on the idea of ‘Black Joy,’ our theme for this year’s Black History Month (BHM).

If you had told me, as a wide eyed first year, that I would have been involved with planning a month long of programming for BHM, I wouldn’t have believed you. Of course, several years prior, the very idea of BHM being celebrated at New College seemed impossible. One of the most busiest months of the year for this campus has only been a celebration very shortly in the making. 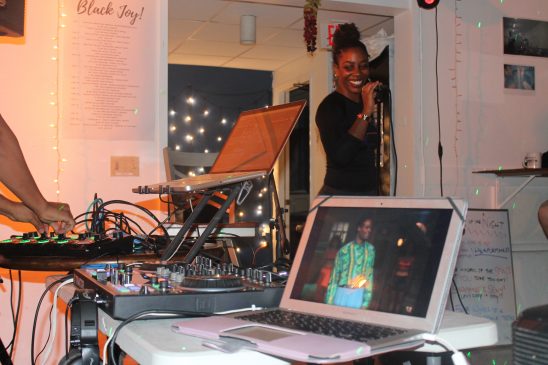 “Black History Month started from conversations in my office,” Assistant Professor of Sociology Meccasia Zabriskie said. “The conversations started out with discussions on being a personal of color on campus, and then being a Black student on campus and what were the ways in which we could use the rich culture and history, as well as the contemporary scholarship, to raise awareness about black folks, global communities and identity.”

At the time, the Jane Bancroft Cook Library was hosting an African-American Read-In, hosted by librarian Carolina Reed, which would take place every February.

Zabriskie, who attended Duke University as an undergraduate series, had experience starting a Black History Month Planning Committee on that campus in order to foster community and raise awareness.

“It seemed as if, because all of us had had these experiences in our life, had more knowledge and events that got us to think about the diversity of Blackness and Black experiences,” Zabriskie continued. “We wanted to continue that here.”

This same sentiment was shared by the student.

“It was the fall of my third year,” alum Nasib McIntosh (‘12) said in a phone interview. “There was a void that [Assistant] Professor [of Sociology, Queen] Zabriskie naturally noted, and she asked if I wanted to get involved with planning.” 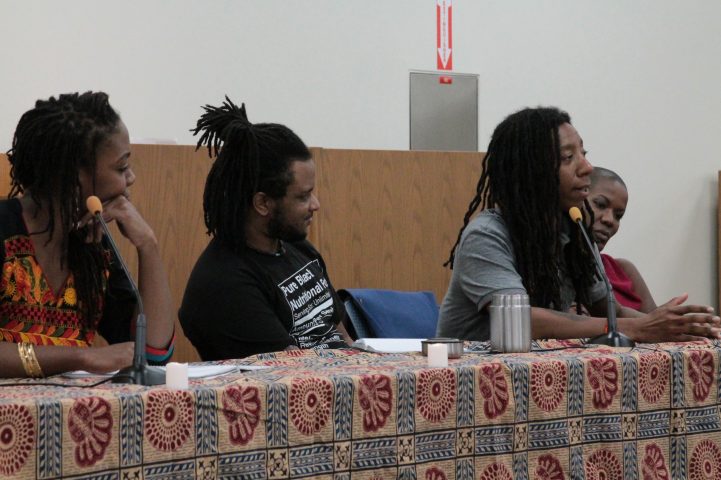 McIntosh and several other students, including alums Donovan Brown (‘12), the late Ijeoma Uzukwou (‘14) and current thesis student and Black Student Union (BSU) President, Paul Loriston, began meeting with Zabriskie in her office for the next few months.

“Her leadership, her guidance, her expertise,” McIntosh said about Zabriskie. “I think that also relying on the other students that we there […] It was really rewarding, so it didn’t really see like that much work. […] can’t really remember the stress, it was very rewarding. It was a lot of thinking, talking, sharing ideas and, from there, it was kind of the mechanical run work. I always had a good time though.”

Since then, the Black History Month Planning Committee has grown to include two faculty sponsors, scholarships from external sources of funding and now included a large group of Black students who meet regularly over smoothies and croissants to plan for weeks worth of events.

“I come from a predominately black background and exist on a white campus and I felt as if I needed a community,” Loriston, who has been involved with planning BHM for the past four years, said.

The African American Read-In has continued to be a constant event thrown during the month as well as the Academic Symposium and Key Note and the Open Mic Night. Recent additions for this year include the Afro-Latinx FIlm Festival and concerts such as the Feb. 2017 Concert sur la Bay and the upcoming Art Collective Festival have centered on performance. 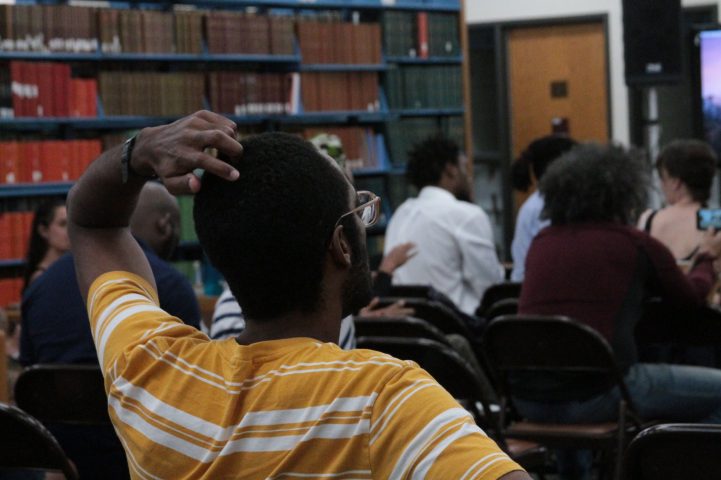 For the past two years, the BHMPC has received $10,000 annually from the Andrew W. Mellon Grant, a $750,000 grant awarded to NCF in order to support events related to the humanities and community outreach.

Kane is the former New College Student Alliance (NCSA) Vice President of Relations and Financial Affairs (VPRFA). He spends the majority of his time on the BHMPC working with budgeting events for BHM.

“The Mellon Grant helps facilitate funding for the arts and connecting with the consortium in Sarasota,” Kane said. “It’s really, really helpful and has been our main source of funding.”

Kane, who was part of early conversations on this year’s theme of Black Joy, wanted to highlight a theme other than Black pain.

“There’s this idea of resilience and being able to embody happiness,” Kane said. “That’s what Blackness means to me.”

“At the end of the day, we are driven by the conversations that we try to have on campus,” McIntosh said. “It’s really valuable to present students in the community.”

Thesis student Kailah Santos finds that BHM has allowed her to find a sense of community on campus.

“I’ve always felt like a minority in every institution of higher educations that I’ve been in,” Santos said. “It was fundamenetal for me, when I got here, to find people who share the same experiences as me.” 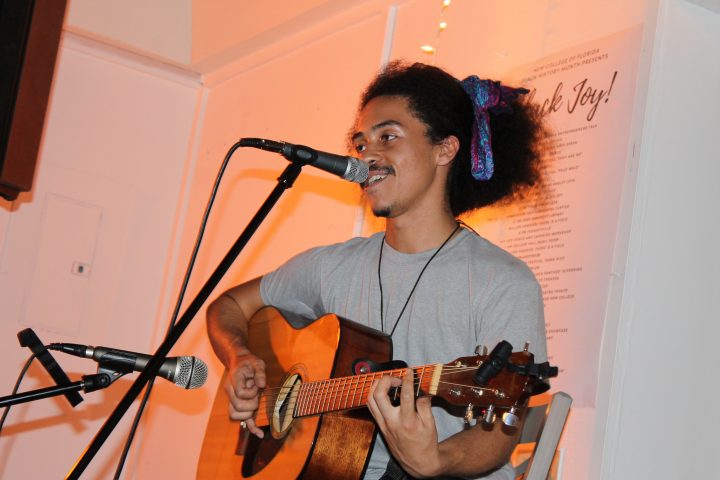 It is also what has propelled this committee to expand each year.

At the Open Mic Night, I was told that, across the room from where I had been anxiously snapping photos, a friend had overheard two girls, one white and one black, having a conversation.

The White student had turned to her friend and whispered: “This is the best New College event I’ve ever been to.” The Black student had smiled back and simply said: “Same.”