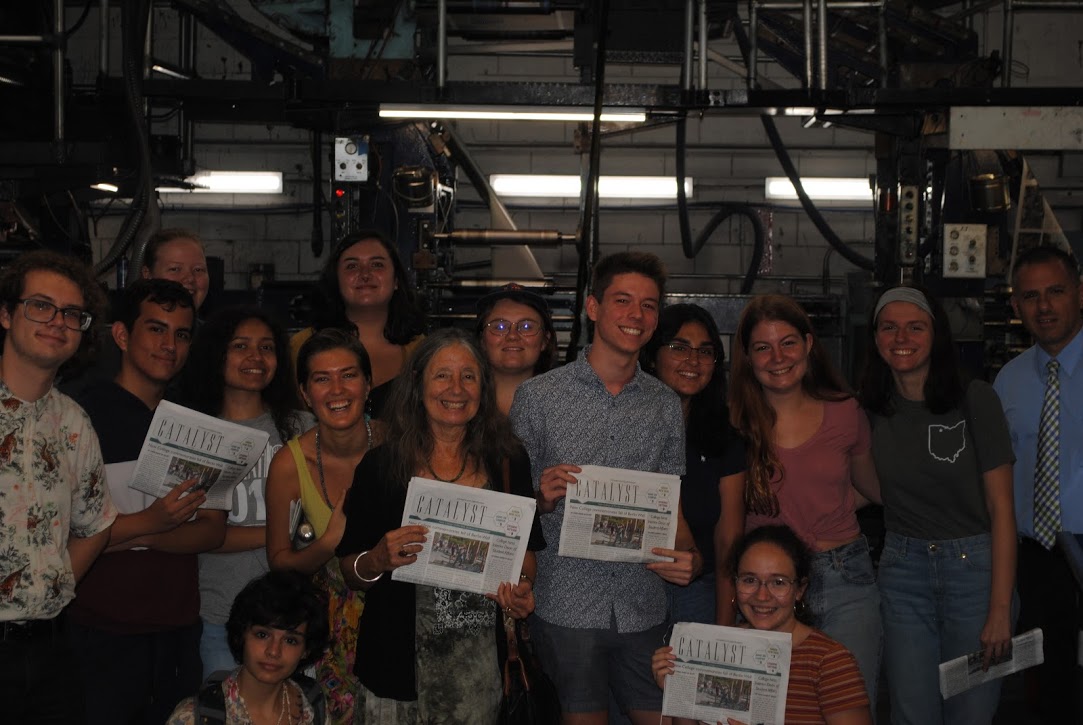 The Catalyst staff, Professor Vesperi and Black posed for a picture with the freshly printed ninth issue.

Before copies of the Catalyst are scattered on the tables in Hamilton “Ham” Center and placed in faculty mailboxes on Wednesday afternoons, Sun Coast Press produces 500 copies at their printing facility in Venice, Fla. On Tuesday, Nov. 12, the staff and sponsor of the academic tutorial, former Tampa Bay Times journalist and Professor of Anthropology Maria Vesperi, took a trip down Tamiami Trail to see the newspaper roll fresh off the press.

John Black, a sales manager at Sun Coast Press, led a tour of the facility. Sun Coast Press prints for school and community newspapers throughout Florida, as well as flyers for local businesses such as Detweiler’s Farm Market. Black has been involved with newspapers for all of his adult life.

“I’ve been able to do everything from answering the phone and getting the guys coffee because I was the lowest one on the totem pole to being told, ‘Hey, you’ve got a month to write a feature,’” Black said.

Originally from Maine, Black wrote for his high school and college newspapers and interned at local papers. After five years of reporting in the sports department for the Bradenton Herald, Black transitioned to commercial sales. He later switched to the printing business and has been working at Sun Coast Press for ten years.

But Black admits that he sometimes misses writing for the newspaper. “I write emails now instead of byline stories,” he said wistfully.

The printing press spits out 500 copies of the paper in a matter of minutes, but Catalyst staff writers and editors, who also write articles most weeks, collectively work over 100 hours on every weekly issue.

Staff writers turn in first drafts of their articles on Friday mornings. After a first round of edits, they submit a second draft to the copy editors by noon on Saturdays. The copy editors fine-tune each article by Sunday evenings, when the layout crew, thesis student Cait Matthews and first-year Sergio Salinas, arrange the articles and photos into final print form in Adobe InDesign. Editor in Chief Jacob Wentz double-checks the text and design and sends in a PDF of the issue to the press on Tuesday afternoons, where the digital newspaper is turned into a tangible object.

The pre-production team at the Sun Coast Press facility in Port Charlotte, Fla. checks the document and sends it to the printing press in Venice. Then, a computer-operated machine, the Kodak Trendsetter, etches the design onto large aluminum plates. Four pages of the Catalyst fit on each plate.

“We go through a lot of aluminum—and paper,” Black said. Plates can only be used once but are recycled.

Press operators seamlessly fasten the plates around large cylinders, which are the same size as the plate, and hook up extra-large rolls of paper to the start of the press.

Instead of pre-cut sheets, the paper comes tightly rolled onto giant spools, which are stacked to the top of a high-ceilinged storeroom. Layout Editor Cait Matthews asked about the fire danger in the densely packed space and Black said that a greater risk for damage is water. If any moisture seeps into the tightly wound rolls, they could expand and break open the side of the building.

“Thankfully it hasn’t happened to us, but I’ve seen some pictures and it can do some severe damage,” Black said.

When the press is turned on, the cylinders rotate as ink is deposited onto the plates. The inked up plates transfer the ink onto identically sized rubber tubes that roll the impression onto the paper. The paper speeds through a system of lofty rollers before it is collated, cut and folded into its final form. A machine counts five stacks of 100 papers and the papers are delivered the next morning to campus.

Punctuality is paramount at every stage in the process. When staff writers turn in their work late, the editors have less time to polish the articles and produce a quality end product. Similarly, at the printing press, a late submission can snowball the entire production line.

“One thing depends on the next,” Black explained. “And if one thing in that process is delayed, it impacts getting it out the door on time.”

Original printing presses, first credited to 15th-century German blacksmith Johannes Gutenberg, featured moveable typesets. Although press operators had to place each letter manually, this innovation was much faster than transcribing and enabled books to be mass produced and distributed widely.

Printing presses and information dissemination technology has evolved since Gutenberg’s era. Digital technology is becoming more integrated into daily lives and some predict the soon demise of print culture. But Black emphasized the remaining popularity of printed products and envisioned intertwined print and digital media.

“People still like the printed product,” Black said. “It’s very important to have digital, but there’s still a lot of people who are still really passionate about print and I think you can have both.”