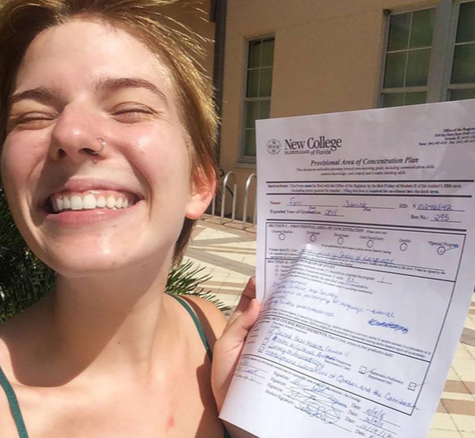 Something stressed to prospective students as a strong feature of the academic landscape at New College is the ability to create an area of concentration (AOC). Third-year Sabrina Finn recently finalized her AOC, “Interdisciplinary Studies of Language,” after two years of struggling to navigate the process.

In Finn’s experience, faculty are generally not keen on getting involved with a student attempting to create their own AOC: “It took me two and a half years to get to the point where I could say I have two professors to sponsor me.”

“I came in with the notion that we create our own AOC, and if the school didn’t have something, you could create your own AOC in it,” Finn said. “Since first year, pretty early on, I’ve been trying to do a Linguistics AOC and pretty much everyone I talked to said ‘no don’t do that, it’s not possible.’”

Finn explained in an interview with the Catalyst that one of the most difficult things about creating one’s own AOC is that the process requires two faculty members to co-sponsor a student-created AOC.

“They don’t necessarily have to have a specialty in what you’re AOC [is] in, but they have to be able to evaluate your work,” Finn said, explaining that only recently had she found a professor willing to sponsor her thesis and AOC. After the initial sponsor had agreed to work with them, finding a co-sponsor was easier.

“One of the biggest things that got in my way was the lack of faculty involvement,” Finn said, explaining that because of the interdisciplinary nature of her AOC, she had talked to many professors. “A lot of faculty members don’t want to get involved with creating an AOC unless you already have as bunch of faculty members involved. So every time I would go to a professor, they’d say ‘Well have you talk to this other person?’ And it would go back and forth in a pretty big circle and it kind of went around and around and around. A lot of professors would just tell me ‘this isn’t possible’ without telling me why it’s not possible.”

The other glaring problem with student-created AOC’s is that they can not take the name of a pre-existing program at another school. This is the reason many people turned Finn away; linguistics is a major currently offered at various other institutions.

“I found that as long as I didn’t call it a Linguistics AOC I could do a lot more with it,” Finn said. “It sort of depends on what your program would look like somewhere else and whether we have something here that could sort of, kind of match up with that, and if we have ways to fill in those holes, and if we have professors that might want to sponsor you.”

This may come as a surprise to first-year students, who were told by admissions that student created AOC’s are easy, or common. After a semester at New College, first-year Sarah Wilhide expressed that her opinion of student-created AOC’s has vastly changed.

“Now I think the process is great, in theory, but in practice it’s a bit confusing,” Wilhide said. “It kind of feels impossible to me now.”

Although not impossible, Finn has advice to those interested in tackling the process of pursuing an AOC not offered here.