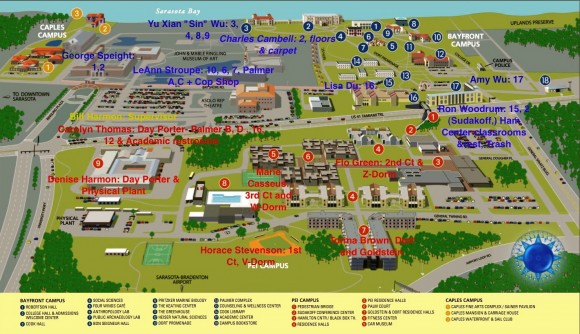 Red text denotes day-shift Custodial and Housing workers, while names in blue show the night shift workers. Seven workers cover the whole of the Bayfront Campus, and are supervised nightly by Bil Harmon.

But New College does not clean itself.

Custodial staff members used to work the early morning shift, starting their work day at 4:30 a.m. and ending at 12:30 p.m. With a short staff and low budget for hiring new employees, the hours for Bayfront Campus custodial workers have changed to late night hours, or third shift — workers now clock in at 11:00 p.m. and clock out at 7:30 a.m. Besides members of the Campus Police, custodial workers are now the only NCF employees on campus overnight.

“The reason we changed the hours was because we had become short-staffed,” Custodial Staff director Laurence “Larry” Sultenfuss told the Catalyst. He explained that a few long-time staff had recently left due to retirement, and that there is a hold on hiring new people. “We wanted to do more with less so we figured we could increase their hours by working at night. After eight in the morning students and faculty start coming in … we weren’t getting a lot done between the hours of 8:00 a.m. and 12:30 p.m.

“The new hours give them roughly four more hours [of] access to campus without running into other people,” he continued.

Sultenfuss said that all of the staff agreed upon the new hours, and that management had made the decision after consulting with workers. “[The workers] all wanted to change,” he said. “You can do a lot more getting off at 7:30 in the morning than [you can] getting off at 12:30 in the afternoon.”

The change became the only solution to logistical and budget issues faced by the maintenance department of Physical Plant.

Some of the problems with cleaning during the day came from the safety hazard of mopping tile floors, as well as complaints that vacuuming disrupted classes and phone conversations in the business and administrative offices. Now the custodial staff generally does all their vacuuming, mopping, dusting and other duties without encountering other signs of campus life.

George Speight, who has been working for New College for 10 years, is responsible for the nightly cleaning of the Caples complex, Sainer auditorium and the Old Caples carriage house, which he said he does not like to go into alone at night.

“I’ve been working here 10 years,” Speight explained. “I love it. I started out on grounds — I guess this is a move up because I’m not outside. At least I don’t have anybody over me … I like [working alone].”

While he does run into the occasional late-night art student, he said it startles him to see people and hear noises when he’s alone in the complex. “I kind of miss being around the kids … I had a lot of friends, but they graduated,” he said.

Speight said that one problem with day hours was incidents like when a student walked in after he mopped the floor. “She got footprints all the way down the hall, but she apologized,” he said.

Ron Woodrum cleans the Hamilton classrooms, Sudakoff and the Counseling and Wellness Center. “I don’t see [students] as much,” he said. “Every once in a while I see a few and say ‘Hey, how’s it going?’” Woodrum said the new hours have made it easier to finish all his tasks, such as making sure the chalkboards are clean and vacuuming all the classrooms each night.

Staff explained that adjusting to a new sleep schedule has been one of the hardest parts of their new schedule. “[The new hours are] ok, [but] I still gotta get used to it,” Speight said. “I haven’t been going to sleep that much, maybe like an hour … Monday is terrible.”

“It’s been a little bit tough sleep-wise … I usually sleep between 10:00 a.m. and three or four in the afternoon,” Woodrum said.

Yu Xian “Sin” Wu, who is responsible for Cook Hall, the Social Sciences Building and Bonn House, said that, for her, it’s hard to sleep during the day. Her schedule is such that she eats at 1:00 and 5:00 a.m., then sleeps upon returning from work, eats again at 1:00 p.m., then eats dinner at 7:00 p.m.

With the translation help of Naushin Jiwani, a student of Chinese, the Catalyst spoke with Amy Wu, who cleans the whole ACE building nightly. Wu said that she sleeps as soon as she gets home every morning and that sleep is her biggest priority. “It’s hard work every day, day in, day out,” Jiwani said of Wu’s description of her work.

Staff members are given two 15-minute breaks per shift and one 30-minute “lunch” break at 3:00 a.m. Since it takes time out of their break to travel to the other side of 41 to eat at Physical Plant, some said they just stay in their designated workspace.

As employees of the State of Florida, custodial workers qualify for benefits after their first month on the job. “The health insurance is really good — it’s helped me a lot,” Speight said. “I think that’s about the best thing about [the job.]”

“This job is a blessing,” Sin Wu said. “I don’t have good English. I can’t find another job and this job was easy for me to get.”

Sin Wu, who has been a resident of the Sarasota area for almost 30 years, explained that at her previous job she got “no holiday, no insurance.” She got the job at New College after visiting her husband, Jim Yu, who cooks for Sodexho in Hamilton “Ham” Center. “Here, we have insurance for our whole family,” she said.

Custodial workers, while receiving medical, dental and optical insurance, also have pension plans as state workers. However, they are hourly wageworkers, earning a starting wage of $9.00 that has not increased in at least five years. As Sultenfuss noted, “for the level of pay, they’re doing a lot of work.”

While there are 14 total workers on the custodial crew, two work the West Campus during the day for tasks that don’t get done during the night hours. Housing staff have kept their normal hours, 7:00 a.m. to 3:00 p.m.