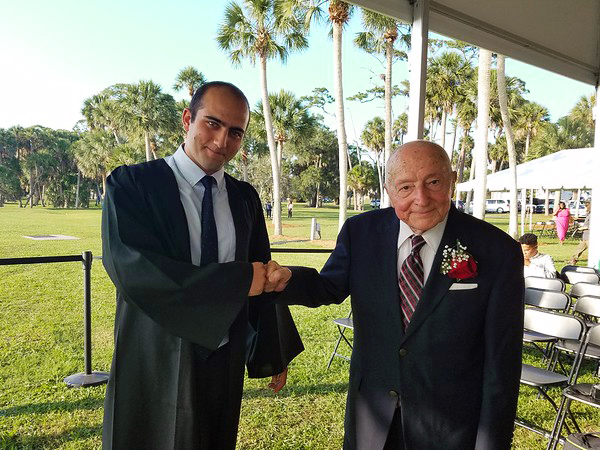 "His last wish was to see me graduate and I am thankful to God that he was able to do it," Gokdemir said.

Education plays an important role in society. It allows people to expand their knowledge and pursue their dream professions. However, finances can often be a limiting factor for students everywhere and often the privileges of an American education can be overlooked. Akgun Temizer, a Turkish born man, saw the benefits of an American education and took it upon himself to help out students from his home country of Turkey in pursuing higher goals. Temizer opened a scholarship fund for New College in 2014 to bring in students from his old high school in Ankara, Turkey. The Temizer scholarship has benefitted three students, who otherwise would not have had the same opportunities. Temizer passed away on Thursday, Oct. 31, leaving behind an inspiring legacy of generosity, kindness and hope.

Temizer was born in Konya, Turkey and went on to grow up in the capital city of Ankara. Having not been wealthy in his youth, Temizer valued the free public education he received, a belief he would carry throughout his life. Temizer would go on to work in the Turkish embassy in Washington D.C., until a coup d’etat in Turkey left him unemployed and with little choice but to stay in the U.S. Not being one to sit around, Temizer applied for a job at a construction company and worked his way up to the role of supervisor, until eventually in 1971 he landed a job at the International Monetary Fund (IMF). Temizer retired from his job at the IMF in 1987 and, while looking for a place to retire in, found himself visiting a cousin in Sarasota. Temizer decided to make Sarasota his home and quickly got involved in the community.

Temizer took a liking to New College and established his scholarship fund in 2014 with a $1.3 million donation. The scholarship focuses on students coming from the Ankara Atatürk Highschool in Ankara, Turkey. The first Temizer scholar, Ozan Gokdemir (‘15), graduated last spring. Temizer wanted to see the payoffs of his contributions first-hand and was grateful for being able to attend Gokdemir’s graduation ceremony.

“His last wish was to see me graduate and I am thankful to God that he was able to do it,” Gokdemir said in an email interview. “He may have passed physically but his memory is always deep in my heart as my third grandfather.”

Because of Temizer’s upbringing, education was one of his central values.

“He believed that equitable providence of these resources to every citizen regardless of their socioeconomic status was the lifeblood of a successful society where each member has opportunities to thrive and break their glass ceilings,” Gokdemir said. “Mr. Temizer always viewed this scholarship as a payback to the Turkish government and nation for the opportunities that were provided to him. His legacy encourages me and other recipients of this scholarship to extend this chain of generosity by picking up the flag from where Mr. Temizer has left.”

Currently, there are two additional Temizer Scholars, first-year Nisanur “Nisa” Genc and second-year Atalay Kutlay. Temizer cared immensely about his scholars, often referring to them as his grandchildren, having never had any children of his own.

“At first he was the guy that gave me the scholarship,” Genc said. “After I came here he called me his granddaughter and when I visited him, he told me about our high school. He was such an elegant person. We the students, are like a family to him. It was more than a student sponsor relationship. He would smile all the time when we were with him. He was so special.”

Temizer’s passing deeply affected his scholars who shared strong relationships with him. Gokdemir and Genc had a long late-night conversation over the phone in their native language on Oct. 31, while sitting on a Pei balcony. They shared a sentimental moment to remember a man who had done so much for them. Afterward, Genc smiled and took a long gaze at the stars before watching Turkish youtube videos with her friend and fellow scholar Kutlay. Being so far away from home, the connection shared between Temizer and his scholars is one that can remind everyone of the things that make New College feel like home.

“They’re like my brothers,” Genc said. “They pretend they’re my big brothers. I never had an older brother in Turkey, so these people are really important to me.”

The way the people who best knew Temizer describe him, it is easy to tell he was a great man with an immense heart. His love and passion for public education are reflected not only in his words and actions but in the legacy he leaves behind with his scholars. Akgun Temizer, while not well known, made extensive contributions to New College and touched upon the lives of students who otherwise would not be here.

“We knew he wouldn’t want us to be sad or cry for him because he would care about our education so much,” Genc said. “That’s my goal, I feel like I took over a flag from him and now it’s my turn to give it to the next generation. Education is really important, and he knew that. If something is going to change the world it’s gonna be with education and he knew that. Whenever I think of him, I remind myself that I owe him a successful life.”

Temizer’s story is one that offers a reminder of the people in everyone’s lives who have worked hard to ensure the success of those they care about. Those role models are different for everybody, but they embody the same ideals: compassion, love and friendship. Temizer’s story can inspire the hope and beauty that is often needed in the draining routine of college living.

“Mr. Temizer had a long, fulfilling life during which he experienced not only financial hardship and political asylum, but also becoming a millionaire who changed the lives of three young people,” Gokdemir said. “He demonstrates the impact of resilience in hardship and generosity in abundance. I believe that his regretless life story poses a motivational model for any young person who aspires to touch the lives of others and make an impact in the world that will outlive themselves.”