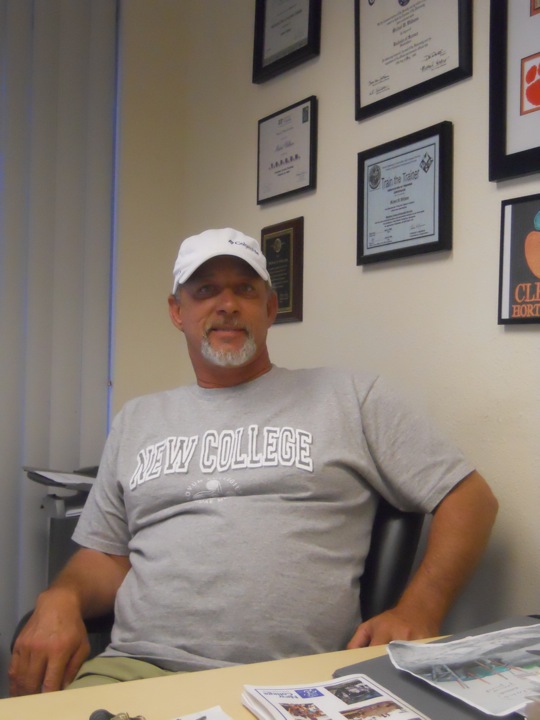 “All plants to me are a gift from god and every one has their place,” Williams said.

Landscape Coordinator and avid cacti collector Michael Williams employs pesticide-free, sustainable practices to maintain New College’s landscape. Williams serves as an advisor to the Landscape Committee and helped create the recently finalized Landscape Master Plan. This plan is a 50 year project that aims to beautify the campus through short and long term goals.

Some of the projects for the Landscape Master Plan have already been started, such as a regenerative forest down Dort Promenade and the Florida native wildflower garden sown two acres north of the area. The wildflower project was spearheaded by Jono Miller and New College students.

“One of our concepts with the Landscape Master Plan is to install more native material because we don’t have a lot of irrigation on campus,” Williams explained. He plans to install underground tanks that will catch rainwater in Pei, run the rainwater through a filtration system and use it for irrigation.

Williams also works with the Office of Facilities, Planning and Construction on projects such as the new Academic Plaza. The plaza will consist of a sustainable courtyard with royal palms and a seating area outside of the café with shady lady black olive trees and other native materials. Williams recently went to Homestead, Fla. and tagged the flora that will go into the plaza. According to Williams, the cost of the material is about $40,000.

“One thing I practice is the use of no pesticides on this campus,” Williams said. “We also don’t use nitrogens. I believe that through sampling our soil, it tells me what it needs. Here in Florida, the one thing we lack is minor elements, such as boron and iron, because they have leeched out through our sandy soils. Those are the only things that are applied to the soil … We don’t use chemicals here. Our kids like to go out and be barefooted — they like to lay in the lawns.

“We do remove invasive species,” Williams continued. “There isn’t an eradication program. Instead we focus on controlling the invasive species.” For example, Brazilian peppers were removed from the Caples Bayfront. “You used to not even be able to see,” he explained. “It makes it more enjoyable.

“When I have bad insects I release good insects,” Williams said. “You can go and buy beetles to eat aphids. Or if there is an insect that is about to lay eggs, you can take a garden hose and wash them off or release a fungus that will only attack them. We take a very good approach.”

Another project Williams worked on was Palm Court. He says that he hand selects ever plant that goes into the college, including the 24 royal palms now installed in Palm Court. A couple of his upcoming projects that are a part of the Landscape Master Plan include the restoration of the seawall at the Bayfront, which will probably start this summer and continue over a period of two years, and the installation of perennial peanut in the lawn near Pei. “They have yellow flowers that taste like roasted peanuts and kids can take them and put them in salads or whatever,” Williams stated.

Williams has all of his staff trained and certified in best management practices. These practices include knowing the best height to cut grass for it to remain lush even when there is a lack of rain. “I’m proud to say I have guys on my staff who have been here for 13 or 14 years and they find it thrilling to be able to go to a class and learn why we do what we do,” Williams said. “There is homeowner pride.