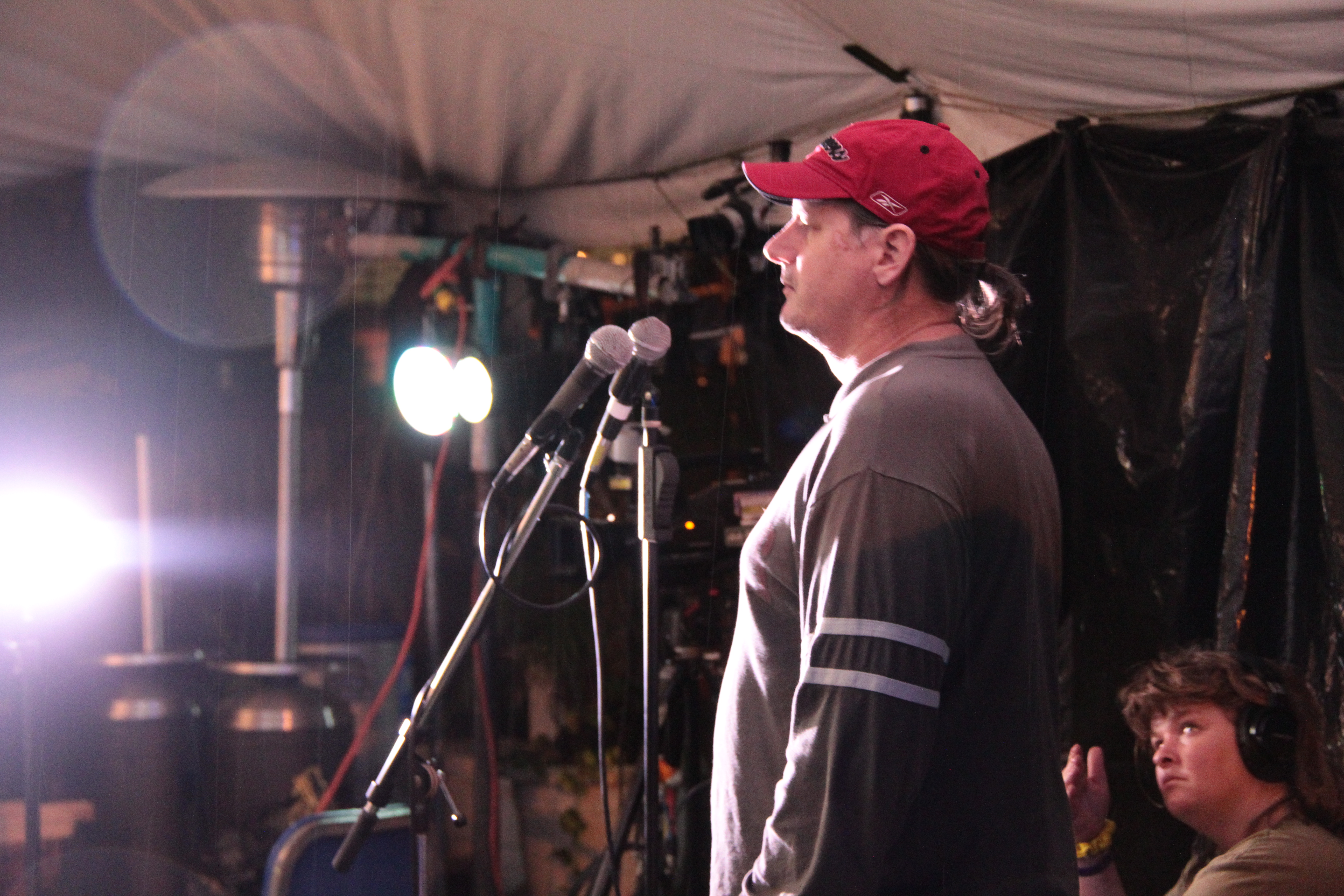 Despite a chilling rain, the Homelessness Marathon persevered through a 14-hour, live, outdoor broadcast that brought the voices of the homeless to airwaves across America.

Marathon founder Jeremy Alderson was homeless himself and created this unique broadcast when he had the opportunity to work at a community radio station overnight when most local stations have free airtime. According to Alderson, the first Marathon was “only” 12 hours long, and it was the first of its kind. Today, Alderson’s original effort to “make people care” about homelessness, seems to have paid off. More than 70 subscriber stations aired the broadcast to listeners all over the country, and six hours were on Free Speech TV. For one night, journalists, experts, advocates, lawmakers, officials and – most importantly – the homeless, came together to talk about homelessness in Sarasota and around the world.

Alderson chose to come to Sarasota because “it seems like every city in Florida, in one year or another, has been named the worst city in the country. Sarasota was on that list and it was the place where we had the best affiliate – WSLR – whom we had worked with in the past.”

For the Sarasota community, the issue of homelessness has been on the forefront of local dialogue for more than a year. With a rising visible homeless population and a hired “expert” shaking up the debate, Sarasotans are in the grips of this divisive issue. Robert Marbut of Marbut Consulting suggested the city build a nonrestrictive, “come as you are” shelter; however, he halted discussion by introducing the largely false, but compelling statistic that “93 percent of the money given to panhandlers is
spent on drugs, alcohol and prostitution.”

Since Marbut’s proposal was rejected in July of 2014, Sarasota has been stuck in a gridlock between city and county, between business owners and the visible poor. “Let’s be honest, at this point, the ‘come as you are’ shelter is the Sarasota County Jail,” Bill Spitler of the County Sheriff’s Department said. Having visited 17 cities and immersed himself in their homelessness politics, Alderson has a unique and rather blasé demeanor – he has seen it all. “I don’t think the folks at WSLR know this, but the original concept was to do something that would get us arrested, or force the authorities to make a decision about arresting us. We were thinking we would go somewhere where feeding homeless people was illegal and feed homeless people as part of the broadcast,” Alderson said. “When I got to Sarasota, I realized it’s not that bad. I’m not planning on getting arrested – let’s put it that way.” For Sarasota natives, especially those experiencing homelessness here, social services are still lacking. “I have a new saying. When people ask me ‘How are you?’ I say ‘I’m eating dirt’ because that’s all I’m getting in Sarasota,” homeless man Robert Trebowski said on the broadcast.

The goal of the Homelessness Marathon – particularly because it was based in Sarasota this year – is to juxtapose the often polarizing political language of homelessness with the voices of the “problem” itself – the currently, formerly or soon-to-be homeless. WSLR opened the doors of its large courtyard, conveniently located on Kumquat Court, a street which a number of chronically homeless call home. The event began at 7 p.m. with a hearty dinner served up by volunteers from the Salvation Army Mobile Kitchen. As programmers panicked to protect the outdoor broadcast booth from the rain, a diverse group – housed and unhoused – stayed inside to warm up around a projector and watch Alderson begin the first hour of the Marathon. Panel discussions occurred every hour and focused on topics such as homeless children and families, tent cities and the media’s portrayal of homelessness.

A highlight of the evening, the 10 p.m. local government panel, featured Wayne Applebee, the county’s homelessness coordinator; City Commissioner Stan Zimmerman; County Commissioner Carolyn Mason; and Sheriff Spitler. They discussed the many roadblocks in the way of providing homelessness services in Sarasota. “The Florida Legislature hasn’t made it any easier,” Spitler said. “They’re currently looking at a bill that would slash money taken from documentary stamps on real estate sales. A bunch of that money was headed toward affordable housing. It would cut that 40 percent.”

“We have to not only continue looking at government for the solution, but we need to partner ourselves with the private industry as well,” Applebee said.

Between the ideological debate and policy suggestions, Alderson welcomed some houseless people to speak up on the issues and share their experiences. However, it was not all serious – many people stopped by to play original songs, show off their singing voices or share poetry. There was even a marriage proposal on the air. As people inside began to lay out sleeping bags on the floor, New College students who spent their Independent Study Project (ISP) interviewing homeless people prepared to share their findings on a 4 a.m. panel discussion. While they did not nab the best spot on the air, the students shared some raw, emotional recordings of homeless experiences, as well as the growth and knowledge they gained.

“January was the first time I participated in something really meaningful in terms of being invested in a community and an issue,” first-year and Catalyst staff writer Haley Jordan said. “ I didn’t know what to expect, it being my first ISP, but I could not have predicted how valuable it has been to me.” Sharing their experiences and perspectives on the air was the perfect culmination to the ISP. “Our group getting an hour of the marathon was really the only way to end a project like that, at least end in the sense that ISP is over, I wouldn’t say it will ever end,” Jordan said. “But it felt really good to get to talk to people about what we learned from our interactions and to see some of our interviews shared with people. We had some powerful stories. We spoke to a lot of people who had a great deal to say, and with good reason. I hope it affected others like it affected us, because after dedicating your time to something like that, and learning what we’ve learned, you can’t help but be altered. It ruins you, but in the best way.”