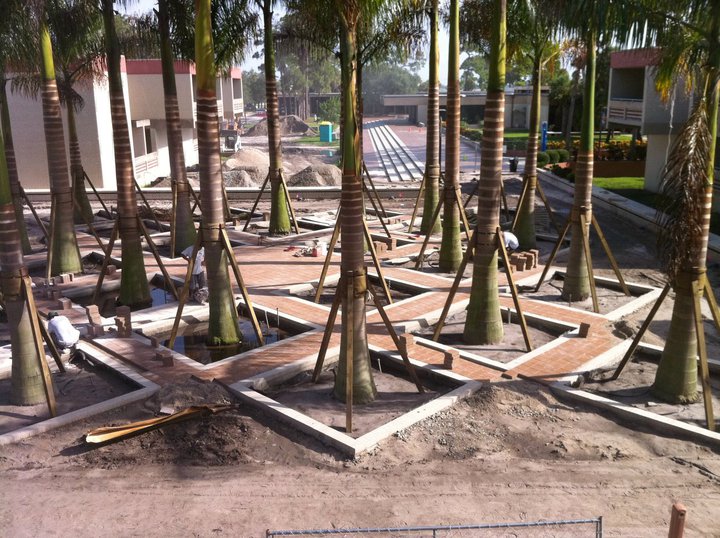 Palm Court, the “center of the universe” according to the New College constitution, is
definitely a hub of student activity, but it surely isn’t new. Palm Court ties everyone from first
years through thesis students to nearly 50 years of New College history as it’s remained virtually
unchanged from the very beginning. In fact, both the red, sun baked tiles and the palm trees have
been there since classes began at New College in 1964. The only changes Palm Court has seen
over the past four decades have been the shifting, crumbling, lifting tiles and the deterioration of
several of the palms.

One of the many things that separates most college students from New College students is
a good slip, trip or a fall on the Palm Court tiles. In fact, slipping, tripping and falling on the
tiles happens so often that it has almost become some sort of an unspoken, painful initiation.
Thankfully, this is the last year New College will have the aforementioned “initiation” as Palm
Court will be fully renovated for New College’s 50th Anniversary Celebration. Congratulations
Class of 2013, you are the last to have been initiated in this fashion!

Scheduled to be completed just in time for the return of students next school year, the Palm
Court overhaul will feature new tiles that should hold up for many years to come. The tiles will
be replaced with similar looking brick paving, identical to the ones seen in the new walkways
around campus. Why that choice of tile? “It’s not an historic place, but we’re trying to treat it
more or less historically,” Director of Facilities Planning and Construction Kenneth Perlowski
said. “I don’t have to recreate exactly what’s there, but I do need to keep the flavor for what was
there.” In addition to preserving the general feel of Palm Court, the new “tiles” will be much
less slippery than the current tiles, easily removable in case of below ground repairs and will
be noticeably cooler for bare Novo Collegian feet, according to Perlowski. “I’ve watched some
pretty spectacular wipeouts,” Perlowski said. Even Dr. Fisher of the Counseling and Wellness
Center noted that there are many toe injuries “when it rains a lot … but that’s been true for 20
years.”

If the tiles can be so treacherous, why hadn’t they been replaced earlier? While New College
was under the University of South Florida umbrella, it was difficult for money to trickle down to
New College proper. When New College did get ahold of funds, red tiles and aging palm trees
weren’t exactly at the top of the to-do list.

The tiles themselves will be getting a personal touch as the New College Alumni Association
has completed a two-year long fund raising initiative “based on people purchasing pavers with
their names on them,” Suzanne Janney, Special Assistant to the President, told the Catalyst. “In
March of 2009, NCAA achieved its goal of raising $250,000 in gifts and pledges through the
Palm Court Initiative,” Vice President of Alumni Affairs Jessica Rogers told the Catalyst in an
email. Although the funds raised by the Alumni Association will be allocated for out-of-state
student scholarships, the renovations will be paid with $250,000 of Public Education Capital
Outlay funding given out yearly by the sate legislature to New College.

In addition to new tiles, Palm Court will also see the current Royal Palms replaced with new,
healthy palm trees. “They’re a little sad looking,” first-year Lara Russo said when describing
the palms to the Catalyst. All of the palms have been “pencilling,” tapering to a point, as they
grow older while some even double as homes for woodpeckers. In addition to the penciling and
woodpecker housing, the palms have also been subject to student abuse. Many of the trees have
countless numbers of staples from Walls and Palm Court Parties (PCPs) of the past.

“An oak tree has the ability to heal a wound. You cut a branch off and it’ll grow over just
like your skin will grow over,” head of the Landscape Committee Jonathan “Jono” Miller
said. “If you drill a hole in a palm tree that hole is going to remain and it’s going to leak sap out
and it’s a way for fungus, viruses and insects to enter. … You can cut a limb off a live oak as big
as somebody’s thigh and come back ten years later and it’s all healed. You drill a hole the size
of a pencil into a palm tree and come back ten years later and that hole will still be there.” For
the ever important issue of Wall and PCP decorations, Miller did point out that something can be
built to protect the Palms and yet still allow for students to hoist decorations up onto them.

As of now, it is unclear as to which variety of palm will be replacing the current ones for a
whole host of reasons ranging from which provide the most shade to those that have less needles.
In an effort to achieve transparency, Miller, who is also Special Assistant to the Vice President
said, “We’re going to show what palms were considered, how they were considered and how
they were scored.”

The Palm Court overhaul is just one step in replacing all of the tiles at New College.
The tiles in front of Hamilton Center and the Jane Bancroft Cook Library will be completely
replaced within a rough estimate of 6 years. Returning students can look forward to next fall
for completed renovations and a time when new students won’t have to go through the slipping,
tripping and falling “initiation.”