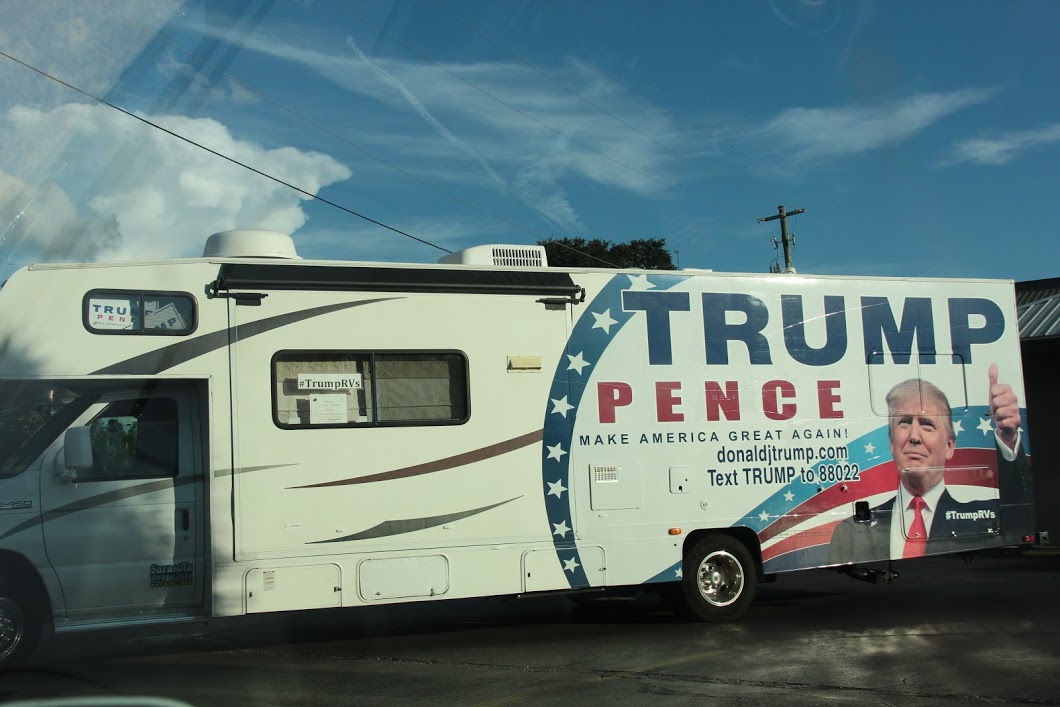 CONTENT WARNING: This article describes real instances of extreme racism and sexism, including uses of slurs.

Since Donald Trump’s election, a wave of intimidation, violence and harassment against minorities has swept the country. News feeds have been riddled with headlines like, “Student wearing hijab threatened with being set on fire” and “Vandals spray-paint transgender woman’s car with hate speech” but incidences such as these seem far-removed from our New College bubble. Until it happens to some of our own.

A group of six first-year New College students had a chilling experience at the Siesta Key Beach drum circle last Sunday. They arrived at the beach around sundown, and it wasn’t long until the situation became alarming.

“The first thing that happened was the evangelical guy promoting hate speech from the Bible,” Selena Goods said, who identifies as a queer, half-Filipino half-Black woman. “They had a huge-ass sign that was like, ‘Gays, Homos, Drunkards, Fornicators, Thieves – You’re Going to Hell’, in big red font. Then there was this one girl who was like, ‘Oh, but God loves everyone’.”

“She came over to me and started talking,” Olivia Pertierra said, who identifies as a Latina woman. “She said, ‘Jesus loves everyone… I voted for Donald Trump, and Trump doesn’t believe that, he just wants the illegals out.’”

According to Pertierra, the woman who approached her was referencing Trump’s hardline stance on illegal immigration, regarded by many as coded racist language against Latinxs. *

A few minutes later, part of the group of New College students overheard a potentially racist comment as a white woman walked past them.

“We didn’t hear what the rest of her conversation was, but we just heard her say, ‘They’re acting like their monkey ancestors,’” Sarai Minott said, who identifies as a dark-skinned Afro-Caribbean woman. “I was like, ‘Ima hope that’s not directed to the black people, even if it wasn’t it’s still racist, so fuck you.’”

Later, the group of New College students were sitting near the shore watching a group of young white people gathered around a beer pong table.

“A bunch of young people were drinking and a police officer [got out of the golf cart and] approached them,” Goods said. “One of the young white men walked up to him with a beer in his hand and shook the officer’s hand. Then the officer drove away. That’s important because we didn’t feel like the police officers could help us at all. And then out of nowhere, we weren’t even expecting anything, some white girl screamed at the top of her lungs, ‘Nigger!’ with a hard R.”

“Sarai was like, ‘Don’t say nigga if you ain’t a nigga!’” Goods said. “One guy from the group yelled back, ‘Come over here and hang out so you guys can understand that she wasn’t saying it in a racist way.’”

“How are you, white woman, going to sit here and tell me, woman of color, that a word used for the subjugation of people who look like me wasn’t said in a racist way?” Minott said. “I don’t understand why white people try to define what is and isn’t racist to people of color.”

Later in the night, the group noticed that the drum circle was winding down and decided to leave. As they walked away from the beach towards the parking lot, a man in the crowd behind them shouted, “Go back to Africa!”

Minott, one of the two black students in the group, attempted to confront the man who shouted at them. “I went over there and was like, ‘Yo, who said that shit to me? What the fuck is wrong with you?’ and they all just stared at me,” Minott said. “At this point I was furious. I got closer to him and was like, ‘Do you want to say that shit again?’ but they started ignoring me so I just walked away.”

Disturbed and enraged, the group of New College students walked towards their cars to leave the beach when they realized they were being followed by the white men who had just heckled them.

“The younger white dude who had shouted [“Go back to Africa!”] earlier had followed us out to the parking lot and was talking to Sofia [who identifies as an Afro-Latina woman] and said, ‘I like Africa! That’s where all the good weed is,’” Tali Spiliadis said, who identifies as a queer Jewish woman.

“Then I said, ‘Fuck off,’ to this other guy that was coming up to us to, like, defend him,” Spiliadis said. “Then they said, ‘You fuck off, you dumb sluts.’ And then we were like, ‘Fuck you! You can’t call us sluts!’ They just kept on saying ‘Sluts! Sluts! Sluts!’ We walked away.”

As the group of New College students got in their cars and began driving away, a group of white men in the parking lot began chanting, “Build a wall! Build a wall!”

“It was really shocking to have blatant racism directed towards me, especially as my first day as an adult because it was my [18th] birthday,” Goods said. “Also, it kinda pissed me off to see white people on the forum be like, ‘Let’s make friends with Trump supporters,’ when me and all my close friends got racist shit said at us while all these white males are trying to discredit our experiences by telling us we should be passive, essentially.”

“I felt really scared and all of a sudden aware that it wasn’t just online or pretend but in real life,” Spiliadis said. “This is more real than I thought. I can’t just assume that I’m safe and that my friends are safe.”

Violent and racist incidents have spiked nation-wide. The Southern Poverty Law Center has counted more than 700 cases of hateful harassment or intimidation in the United States since Donald Trump’s election. Many perpetrators explicitly invoked Trump in their harassment.

*The term “Latinx” is used as a gender-neutral option to describe people of Latino descent.