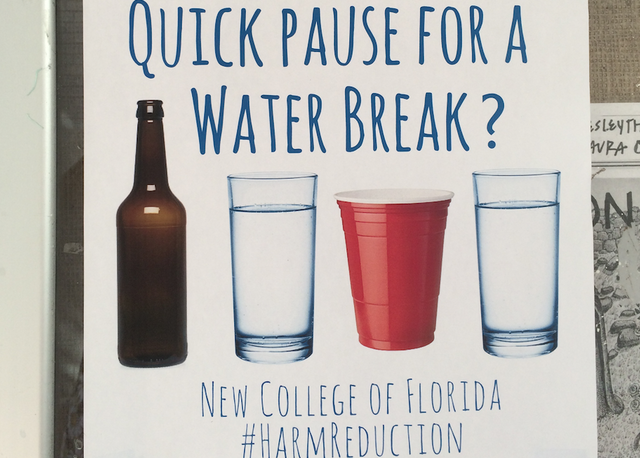 Harm reduction is a public health philosophy centered on the principle that drug use has and always will exist in our society. Humans have had the inherent desire to alter their states of consciousness since the beginning of their existence, and attempting to reduce the risks associated with this potentially harmful behavior has been scientifically proven to be the most medically and socially sound solution.

According to the Drug Policy Alliance (DPA), accidental overdose deaths are now the leading cause of accidental death in the United States, exceeding motor vehicle accidents, among people 25 to 64 years of age.

“Harm reduction is so important because sometimes by ingesting substances or by engaging in partying in general, people try and get away from their minds and they can forget to take care of themselves,” said second-year Hannah Procell, a member of Students for Sensible Drug Policy (SSDP). “Especially on a campus like ours, where we have so many people with mental health issues and disabilities, it’s so important that we foster a really great community environment that promotes self-care.”

Harm reduction does not advocate for or support the use of drugs, legal or illegal. It simply aims to prevent the risks associated with drug use.

“It’s super important, especially on a college campus because there are extra risks associated with drug use, such as sexual assault,” added thesis student Janie Hepler, also a SSDP member. “When you have freshman who are coming in who have maybe never used substances before it’s really, really important to be educated.”

A large part of the implementation of harm reduction policies, especially on college campuses, is providing individuals with unbiased, factual information about substance use in the hopes that they will be able to make independent, informed decisions.

“If we go more with a harm reduction strategy, administrators can feel confident that our students have the education to make the choices. They [the students] understand what they’re getting themselves into. As administrators, there are things we have to do to keep the campus safe and students can also feel confident in their choices because they have the information,” said health educator Mandy Parente.

A major tenet of the harm reduction philosophy is the increased accessibility of drug and alcohol treatment for individuals struggling with drug addiction and abuse.

“Nearly 40 percent of people who wanted drug or alcohol treatment reported that they were unable to obtain it because they had no health coverage and could not afford it,” according to the DPA’s website.

Harm reduction emphasizes the treatment of addiction as a medical issue, not a social or moral problem – as is often the case under the current zero-tolerance drug policies in place in the United States.

According to the National Institute on Drug Abuse, “estimates of the total overall costs of substance abuse in the United States, including productivity and health- and crime-related costs, exceed $600 billion annually. This includes approximately $193 billion for illicit drugs, $193 billion for tobacco and $235 billion for alcohol.”

Along with advocating for the increased availability of treatment for abuse and addiction, harm reduction policies work to reduce the chance of death or injury from drug use. Naloxone is an opioid antagonist that works to block the absorption of opiates by the brain, reversing the effects of heroin and other opiates and stopping an overdose upon administration.

“You can get naloxone with a prescription now in Florida. Your doctor can give you a prescription based on the fact that you are taking opiates,” Procell said.

Naloxone is inactive if administered to someone who has not ingested opiates, making it impossible to overdose on. The medicine must be kept in a cool dry place or else there is a risk of lowered potency, making it difficult for law enforcement to keep the opiate-antagonist on them when they are on patrol or working out of their vehicle – especially in the hot, humid Floridian climate.

“[The drug policy task force] were keeping track of the law that was going through the legislature about having the anti-opiate treatment [naloxone] available,” Professor of Biochemistry Katherine Walstrom said. Walstrom is the Chair of the Division of Natural Sciences, and a member of the drug policy task force created by President Donal O’ Shea.

The Good Samaritan Law and the Medical Amnesty Clause:

“I don’t think you can even pretend to have any kind of harm reduction if you don’t have a medical amnesty policy,” Walstrom said, adding that one of the task force’s goals was to rewrite New College’s medical amnesty clause and make it more clear.

Twenty states and the District of Columbia have enacted policies that provide limited immunity to individuals who seek help in the case of an emergency. Florida passed a version of the Good Samaritan law in 2012.

“When SSDP started it was a few students on campus who were working to expand the medical amnesty clause to include the person that calls for you [as the incapacitated individual] and to include substances other than alcohol,” Procell explained. “The medical amnesty clause, which is currently being resubmitted for revision under the new policies, basically says that if a student is intoxicated and their friend is unconscious or they think they need to call for medical help, if you call for them they will be granted amnesty for their state of physical being [intoxication] and it won’t be held against you.”

“As a state institution I think there are limits to the types of harm reduction policies we can have that are still legal,” Walstrom said.

Due to New College’s association with the State University System of Florida, the school must abide by state standards in order to maintain funding and accreditation.

“My professional philosophy is to let the students be the experts on their campus,” Parente said. “I don’t know New College’s culture. I’m not an alum, I’ve only been here six months. You [the students] are all the experts on your culture and what is going to work and what messages are going to be received.”

The task force reviewed current policies and procedures and created a campus climate survey to assess existing attitudes toward drug use on campus. They also researched other schools’ drug policies, ranging from large state schools to small liberal arts colleges.

“We thought the Reed policies were the best sort of model to start with because most of the other SUS [state university system] policies were as opaque as ours, or they were really punitive,” Walstrom said. “We tried to find something that would work at New College but that also was more clear than the previous policy, which was a mess.”

The task force also assigned one member of the force to gather information on drug use and substances.

“Students are taking drugs for a reason. Some people do it for recreational purposes, but other students are self-medicating for different reasons, other ones are in pain. We were trying to think about what are some situations that would make it more likely that a student might use illegal drugs and would there be any way to deal with those situations before they started,” said Walstrom.

Walstrom also commented on the current status of the revised policy. “There is the chance to make comments on the policies. My understanding from the last faculty meeting is that the board of trustees is going to be able to review the current draft of the policies and everyone is going to have a chance to make comments on those policies. The board of trustees can review those [comments] and then the policies can be rewritten, if necessary, before the policies are voted on in June. President O’Shea was pushing for March [for the vote] because he really wanted student input, but I think the compromise was that students are having a chance to give input now, there will be time to do a rewrite after the March board of trustees meeting, and, hopefully, the students can have more input before the end of the semester.”

The Zendo Project is an organization dedicated to psychedelic harm reduction whose goal is “to provide a supportive environment and education to help transform difficult psychedelic and psychological experiences into opportunities for learning and growth,” according to their website, zendoproject.org.

Founded by a New College alum, the Zendo Project has created a free, downloadable manual on psychedelic harm reduction that is easily accessible online. Psychedelic harm reduction is based on the implementation of harm reduction philosophies into a targeted system of dealing with the specific issues individuals may face while on hallucinogenic substances, especially in a turbulent environment like a music festival – or COUP.

The four primary aims of psychedelic harm reduction can be surmised into a four-word phrase: Safely Sitting Through Difficulty. The four basic principles are: creating a safe place, sitting not guiding, talk through and not down, and difficult is not the same as bad.

“Check out Erowid, check out the Zendo Project website, there’s the bluelight forums for more in-depth drug knowledge, or talk to one of us,” said Hepler.

Other valuable harm reduction resources include rollsafe.org, dancesafe.org, and tripsit.me.

“All this is [rollsafe.org] is recognizing that people take MDMA all the time, and that people that who take MDMA are looking for information on how to be safer about it; there is a need for that information, and this website shows that we have some scientifically-backed up, proven information and research on MDMA that has been happening for years,” said Procell.

Increased accessability of accurate, scientific information on drug use and abuse is one of the simplest ways to ensure students are able to make educated decisions about substance use.

“Students on college campuses, especially campuses like New College where there are many high-achieving students, want the information, they want to have fun, but fundamentally they want to be safe,” said Parente. “Moving towards a place where our campus can be really safe and feel like a community again, is really what the ultimate goal of all of this is.”

(1) A person acting in good faith who seeks medical assistance for an individual experiencing a drug-related overdose may not be charged, prosecuted, or penalized pursuant to this chapter for possession of a controlled substance if the evidence for possession of a controlled substance was obtained as a result of the person’s seeking medical assistance.

(2) A person who experiences a drug-related overdose and is in need of medical assistance may not be charged, prosecuted, or penalized pursuant to this chapter for possession of a controlled substance if the evidence for possession of a controlled substance was obtained as a result of the overdose and the need for medical assistance.

(3) Protection in this section from prosecution for possession offenses under this chapter may not be grounds for suppression of evidence in other criminal prosecutions.