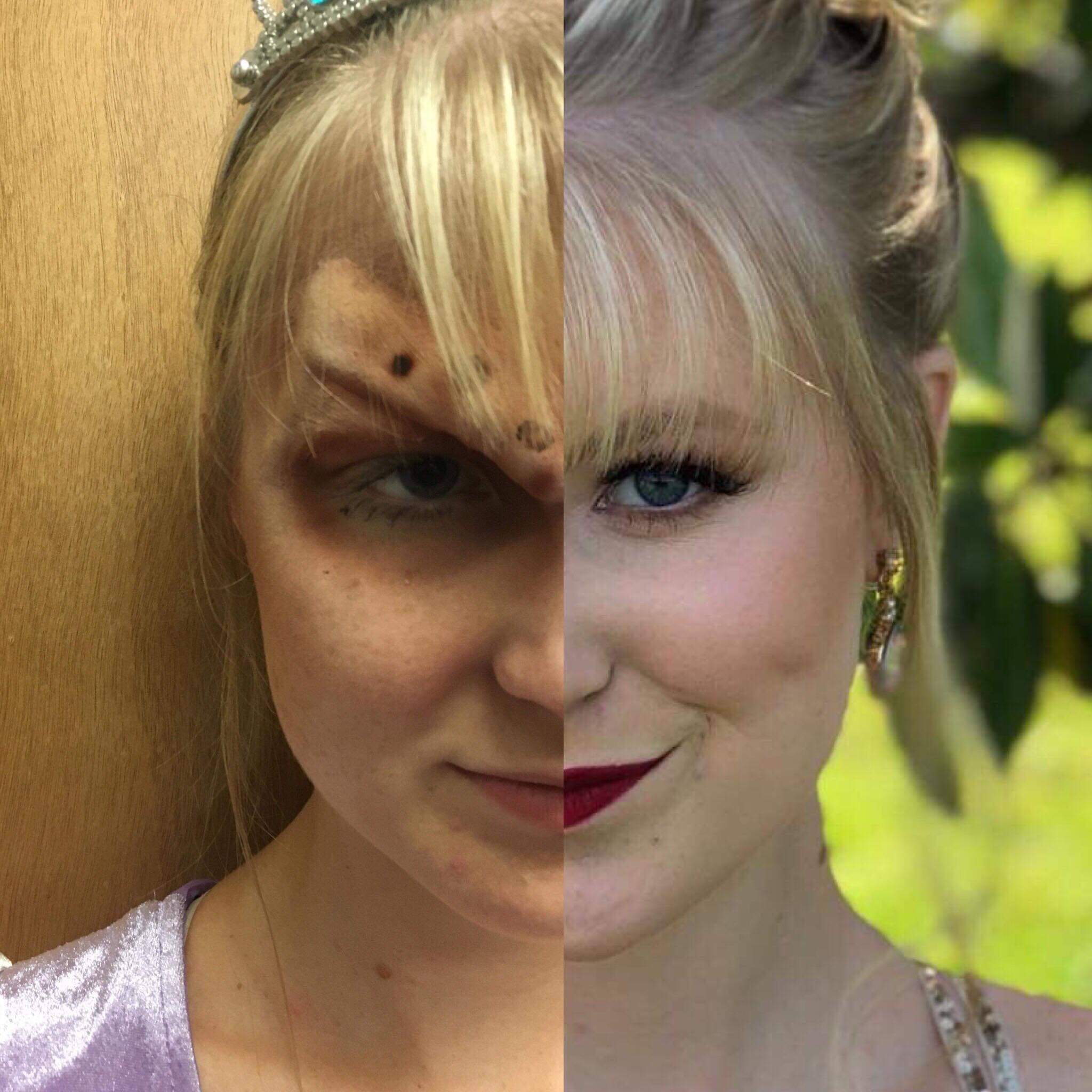 image courtesy of Ryam Blagg Madisen after makeup to go and “hang out with” Rapunzel from ScaryTales.

Due to licensing, scareactors cannot say that someone played a specific role, the proper term is “hung out with ____ (character).”

Halloween Horror Nights (HHN) is a popular seasonal event in which tourists and locals visit realistic scare zones and haunted houses at Universal Studios in Orlando. Each house and scare zone is equipped with actors called “scareactors” that interact with the guests in intricate costumes in an attempt to scare and thrill those in attendance. Universal states on their event website that safety is their top priority for guests, but scareactors often must deal with guests who harass and assault them with little to no accountability for their actions.

It is hard to gain statistics on the rate of these encounters, as Universal has not released them. The Orlando Sentinel spoke to Universal spokesman Tom Schroder in 2015 after a string of publicized incidents. He told the Sentinel that the staff is trained and that they care about the employee. In the interview with the Sentinel, he claimed that there had been a reduction in the number of incidents between scareactors and guests over the course of a few years, but would not release these statistics. The Catalyst reached out to Universal Orlando’s public relations department for these statistics; they did not immediately respond to requests for comment.

“I was attacked by a boy who was [probably around] 10 with a fake ax,” Madisen Regner, a current scareactor, said. “I saw a blinking light through my mask [and thinking it was a light up necklace sold in the park] popped out of my boo-hole [the place where a scareactor is stationed to work from]. Instead of reprimanding their son, his parents laughed over the incident. I ran out of my boo-hole and got my stage manager. If I hadn’t left he would have done it again. I currently have a welt on my arm from this experience. I was told by two other actors in the house the child swung at their boo-holes but — thankfully — missed.”

According to Regner, the actors are trained in a seven-hour orientation to try and prevent these interactions with guests through a tactic known as “Boo and Skidoo.” The Boo and Skidoo method teaches scareactors to quickly pop out and then get back into their boo-hole, which is usually located behind an object or door in order to prevent injury by guests.

“They [HR] told us to get the stage manager if we are touched or hurt but you don’t always have access to them [because of location or where guests are located],” Regner said. “You need to then go to the ops and house attendant at that point. However, the stage managers are preferred because they stick up for us.”

House attendants and operations (ops) are the security team members who stand in the corners of houses to make sure the lines are flowing and that guests and actors are safe. Stage managers are there to supervise the scareactors and guarantee their well-being throughout their shifts. Off-duty officers of the Orlando Police Department (OPD) also work the event for security purposes.

The “Know Before You Go” page on the event’s website states that “if you mistreat any of the Halloween Horror Nights performers, you’ll be sent home.” However, according to Regner, not every person who mistreats scareactors is kicked out of the event.

“A guy punched a scareactor in Trick’r Treat [ Regner’s primary house] and her lip was busted and bleeding,” said Regner. “She went up to the ops in the corner and he did not do anything about it. We are not sure if he just ignored her or just didn’t realize she was injured because of the fake blood [that is part of her costume]. She ran to the stage manager who called security on the guy who hit her. But he was let go because he claimed it was an instinctual reaction he had to the scare.”

Regner was hit in the neck by a guest, but could not see through her mask when “hanging out with” Sam (a character from the Trick’r Treat film). As a result, she cannot tell if the action was intentional or not. She also “hung out with” the bagged clown character and said several people have touched her arm and hands in that costume. She is unsure if guests understand that she is real or think she is simply a prop.

“A scareactor in the Stranger Things house who “hangs out with” Steve was pushed against a wall by a group of women,” Regner said. “One [woman in the group] forced herself on him and tried making out with him as he held a prop baseball bat between them to fend the group off.”

While these events do happen, Regner says the house attendants and security have stepped in during urgent times. When she “hung out with” possessed Jamie (a character from the Halloween film series) a guest started pointing at her and screaming “shoot her, shoot her” and security ran in within seconds to remove the guest. Regner was not sure if it was a real threat or not, but she was happy the situation was taken care of swiftly.

Even with these incidents, many scareactors are seasoned veterans and reapply to work the event year after year.

Scareactors make between $11 to $15 per hour according to Glassdoor, a website where employees and former employees anonymously review companies and their management. (Glassdoor does not discriminate between the rate of pay between those who work at Universal Orlando (FL) and Hollywood (CA) as scareactors.) Regner states that she makes $10 an hour and $15 an hour for overtime.

Regner’s primary solution to reduce negative interactions between guests and scareactors would be for Universal to regulate the alcohol consumption in the park. Alcohol is found in the systems of perpetrators trying to commit rape, murder, harassment and other violent crimes more often than any other illegal substance. According to statistics released by CampusSafety, 69 percent of those accused of attempted rape and assault were found to be intoxicated at the time of the crime. At HHN soft drinks, water and alcohol are sold both in the streets and in the lines for attractions. With the wait time for houses being anywhere between 30 to 95 minutes, these carts are a huge moneymaker for the park.

“Even with the incidents [I experienced], my love [of the job] outweighs the minor transgressions of guests,” Regner said. “I trust my stage managers very much and definitely want to work the event again next year.”

Information for this article was gathered from glassdoor.com, The Orlando Sentinel, Campus Safety Magazine and the National Council on Alcoholism and Drug Dependence, Inc.