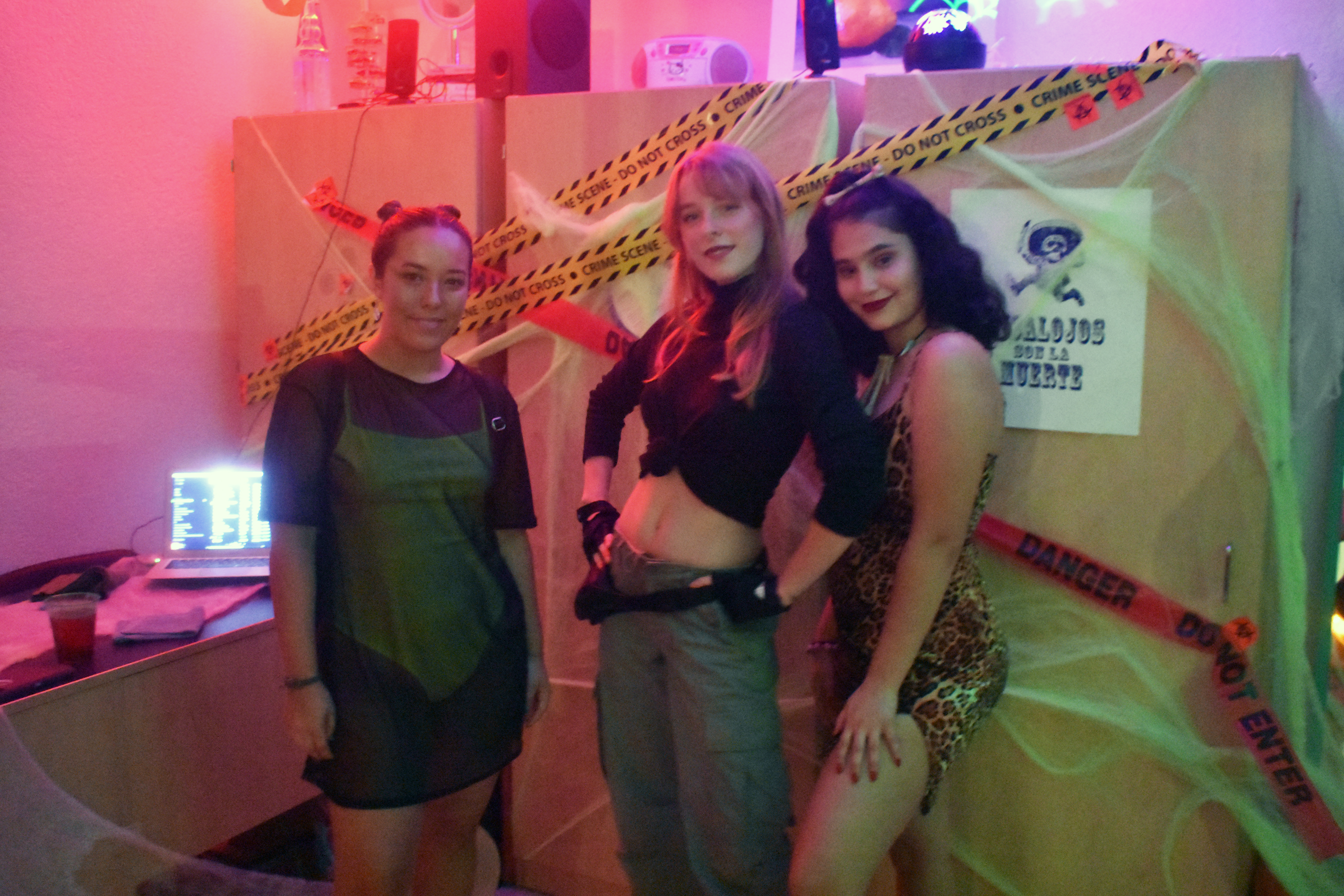 Second-years Gabriela Ott and Hannah Gatoff posing with a friend at a Halloween Party in second court.(2019)

Halloween is a beloved holiday because of the costumes and promise of candy in a time filled with nostalgia.  This past Halloween, the campus saw many elaborate costumes as people went to various parties and Library After Dark.

Among the more recognizable costumes was that of first-year Kaylee Snell.  Snell dressed up as singer-songwriter Amy Winehouse. Complete with a large black wig, Snell impersonated the “Rehab” singer quite well.

“I like Halloween because I can be as extra as humanly possible and do my makeup all fancy,” Snell elaborated. “I chose Amy Winehouse because she is an iconic queen and unapologetically herself.  She’s my idol.”

Thesis-student Aiden Juge dressed as Yuri Katski from the acclaimed Yuri! on Ice, a 2016 anime that turned heads with its exquisite animation of ice skating routines.

“I like wearing costumes because I enjoy the costume-making process, as well as getting to do something related to media I enjoy/fandoms I’m involved in,” Juge said.  “I knew I’d do this costume (Yuri Katsuki’s Eros skating outfit) eventually after first watching Yuri! on Ice back in 2017.  I liked the show, the aesthetics of the costume appealed to me and it seemed fairly feasible to make and reasonable to pack for college as well as comfortable to wear in Florida.”

Third-year Lizzy Barrett chose to go as Lio from the film Promare, a 2019 post-apocalyptic anime.

“I like Halloween because it gives me the opportunity to dress up and go out and have fun Trick or Treating with my friends!” Barrett explained.  “My costume was the character Lio from the movie Promare, dressed as a vampire (the movie studio drew an official illustration of him in his own Halloween costume). I thought it was cute to see an anime character dressed in a costume. It’s like a double costume!”

Thesis-student Emma Todd dressed as Claire Saffitz from Bon Appétit magazine’s test kitchen.  Saffitz is famous for her “Gourmet Makes” series on YouTube in which she makes gourmet versions of everyday candies and snacks.

“Halloween is fun because you get to dress up however you want and that’s neat, but I love seeing what other people dress up as because some people are so creative,”  Todd said. “I chose to be Claire from the Bon Appétit test kitchen because it was easy. I literally just got an apron and it was comfy!”

“We were kind of stumped on what we were gonna do and I was trying to think of things we care about and I thought of the democratic primaries,” Kufrovich said.  “We look the most like Marianne Williamson and Elizabeth Warren, so those are the ones we went with.”

An interesting choice on both accounts, Johnson stayed in character for most of the night during the campus Center of the Universe Party (COUP).

“Every year I don’t want to put in the effort and am lazy about my costume, but Annika convinces me and we find something that excites us,” Johnson explained.  “Also now we’re a power couple every Halloween.”

Third-year Phoebe Sernaker had two costumes this year. On Halloween night, she dressed as Anne Shirley from the TV series Anne with an E with her friend and roommate, Caroline Newberg, who dressed as Jerry Baynard from the same show.

“I needed a quick and easy costume and I like [Anne’s] aesthetic overall, so it seemed like a pretty easy and fun costume,” Sernaker said.  “I just needed a floral patterned dress and to put my hair in braids.”

The night of COUP, Sernaker dressed as Donna Sheridan from the film Mamma Mia!

“Just for fun, I decided to curl my hair and then I brushed it out a little and discovered that I had [Donna’s] kind of aesthetic,” Sernaker explained.  She then found clothing that suited Donna’s style from her closet.