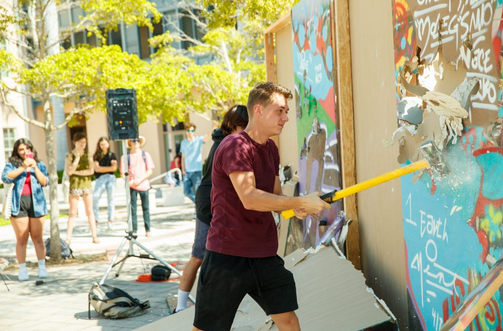 Students reenact the destruction of the Berlin Wall during the on-campus Berlin Wall project in 2019. Photo taken from the NCF German department.

Did you know that German and English share 60% of their vocabulary? That’s only the tip of the iceberg according to the New College German Department, which aims to merge cultural exploration and language learning to bring students together to learn more about not just the German language itself, but the traditions and culture that follow.

The Catalyst spoke via email with Visiting Assistant Professor of German and Film Alexandra Hagen, who joined the Humanities Division in Mod 2 Fall of 2021.

“I have been teaching German language, literature, film and culture courses in the position of Visiting Assistant Professor since 2011,” Hagen said. “I came to NCF from Concordia University in Montréal, Quebec, Canada. In addition to my teaching responsibilities there, I also coordinated the basic language program. I have also taught German as a foreign language (A1-C1) at the Free University in Berlin, Germany.”

With an extensive background in German language, literature and film, Hagen is able to incorporate various aspects of the culture within courses in order to allow students to explore the culture from multiple angles. This helps to reach students throughout a multitude of disciplines i.e. German literature, language studies, film and so on.

“With a [joint] degree in German Studies, you can go into any career or pursue a graduate or professional school degree,” Hagen said.

She spoke about the shift within the field and explained the change in focus from solely literature studies to a more broad application across all fields.

“German Studies is not just about literature anymore,” Hagen continued. “The discipline is interdisciplinary by nature, so we need to connect with many disciplines across our liberal arts campus as much/often as possible, such as visual arts and media, environmental studies, urban studies, etc.”

Hagen explained the different skills that one picks up within the program and gave examples of the benefit of having a degree that incorporates a foreign language.

“By the end of your fourth year, you have excellent writing skills, not only in English but also in German,” Hagen proposed. “Recent studies have shown that having a foreign language such as German on your resume is a valuable asset. Students who graduate with a minor or double major usually make 25% more entering the job market from the start.”

Along with the current classes that Hagen is teaching—including Intermediate German, Advanced German, “German Through Film” and “Thinking Green: Nature, Environment, and Sustainability in Germany—she has also taken charge of the German department while Professor of German Language Wendy Sutherland is on research leave for the academic year.

“In general, we would like to make the discipline more visible on campus and in the community,” Hagen said. “We would like to see a more diverse group of students interested in learning German or about German culture.”

Aside from classes, Hagen has also been hosting many on campus events to promote the department as well as German culture. In addition to this, the department was awarded $8,500 for the “Germany on Campus” program this year from the German embassy. She gave some examples of where this funding is going as well as events that are held.

“For example, we had the German consul visit in early November who discussed Germany’s role in the EU in light of the looming energy crisis,” Hagen said.

At this event, the floor was opened to students to ask questions, pushing involvement and providing them with an insight into how the language can be applied within the workforce. Stepping away from more traditional academic celebrations, Hagen has also hosted multiple film screenings and more casual gatherings for the department, more information for which can be found on Novoconnect.

“On Friday [Dec. 2], there will be the last film screening,” she said. “My advisees suggested the pool as a location, so we will watch “Fack u Göthe”  there this Friday night with free pizza and drinks.”

The Catalyst also reached out to students within the department about their personal connection and experiences.

“I took German because I have German ancestors and feel that learning their language is a way to connect with them,” third-year Alyssa Sampson said. “I had not taken German before New College. It’s really cool to be able to learn about the history so we have context for the movies and then discuss them after.”

“Though I am not in a German Area of Concentration (AOC), I am in Intermediate German I because I felt it was a good decision for me to grow closer with part of my heritage,” third-year Stefan Jürgensen Valle explained.  “Though my AOC is in Environmental and Energy Sciences, I am interested in pursuing graduate education in Germany because of the affordability of programs and the German culture of sustainability and innovation. With respect to this, it can only help to have two years of German language knowledge under my belt!”

Being a transfer student, Jürgensen Valle gives his perspective on the New College German department compared to his previous experiences in different programs. The biggest difference that is noted is the small class size and personal nature of the courses compared to large universities’ programs.

“I was enrolled in, and dropped, Beginning German II at the University of Florida (UF) a year prior to transferring to NCF,” he said. “The experience does not compare, given that the highly personal nature of the class was relegated to Zoom. It has been like a breath of fresh air to learn German in an intimate interactive setting where there’s no real pressure. The flipped-classroom style of the course has been working very well too, as class time is reserved for real language practice and immersion.”

“The community is very kind, particularly the professors,” Jürgensen Valle continued. “My experience with Dr. Alexandra Hagen has been entirely positive, and her dedication to students’ success is a gift. Because my class has only seven students, we have been able to build a safe and supportive community that I’m sure will continue into the spring.”

Along with taking German courses, he also explained that the extracurriculars that the department has provided—such as the ‘Germany on Campus’ event—let him and other students learn more about “cultural, social, and environmental responsibility as key facets of today’s Germany.”

“I am grateful to the New College Department of German Studies for the many learning opportunities they’ve provided this semester, and cannot stress enough how excited I am to be traveling to Berlin for ISP thanks to them!” Jürgensen Valle concluded.