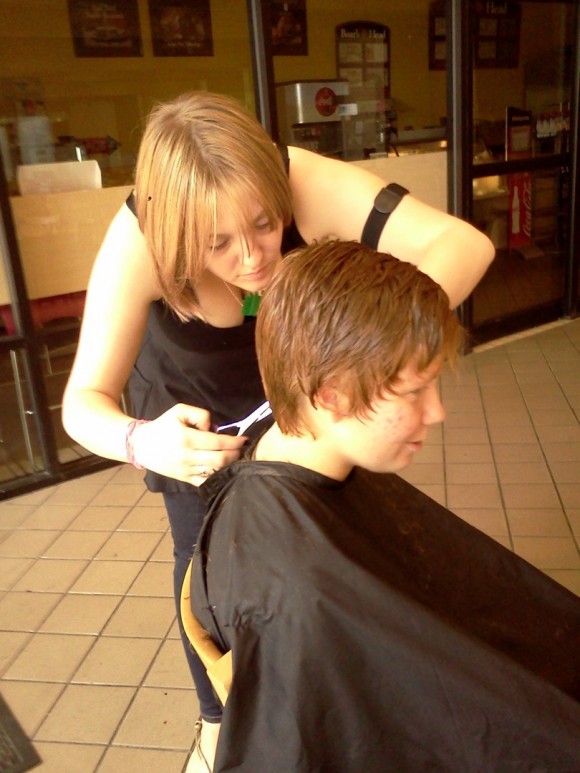 Shannon Strischek (’09) set up shop in Hamilton “Ham” Center on Apr. 21 and 22. Thousands of bristles of hair littered the tile in front of the reflective glass of Boar’s Head Sub Shop.

Strischek, who had sent out an e-mail offering haircuts for $5 to $10 to Novocollegians, was in town for the annual All Power to Imagination! Conference. As of her recent appearance, she was a couple weeks shy of graduating from the Aveda Institute in St. Petersburg, a school that teaches cosmetology and spa therapy.

Forty students lured by the prospects of an Aveda cut responded to the email.

This reporter got her locks trimmed while interviewing Strischek about her choice of profession. For 45 minutes, our two crafts, journalism and hairstyling, intersected.

What made you get into hairstyling?

When I was in high school, my mom never let me do anything with my hair. I had natural blonde, super-light hair. When I got to New College, I dyed my hair brown for Halloween because I wanted to be Sarah Brightman [the original Christine in the first production of Phantom of the Opera]. From there, I was in a show and my director said, ‘I kind of need you blonde.’ She told me about the Aveda Institute in St. Petersburg and I ended getting my hair done there the entire time that I was at New College … I’ve had so many bad haircuts, I was at a point where I couldn’t care anymore.

Why is hair important to you?

There is so much bad hair out there. As for me, my mom was never really into that sort of thing — paying attention to your personal appearance, you just don’t do that — it’s selfish, it’s vanity. Then it just came down to when I had my hair done and it actually made me feel good about myself. My self-esteem and body image — not the best. The first time I ever went to the Aveda Institute they said, ‘Oh my god, you have such nice hair.’  Every time I get my haircut they say, ‘Oh my god, you have such nice hair.’ It’s reaffirming — at least I have nice hair.

The idea of hairdressers and everything is like it’s for someone who doesn’t have anything else to do — it’s for people who really aren’t smart enough to do anything else. I find that with every field that the people who are going to be on top are the ones who are intelligent and who know what they want from it. That has been a learning experience for me. That was my biggest concern going to the Aveda Institute. It was, ‘Oh my god, am I going to be forsaking everything that I learned at New College?’

What role do you think hair plays in forging an identity?

Honestly, I think it’s a huge part. For some people, it’s as important as their face. For example, when sheep’s pelts are cut … they have to have a new battle over who is king of the herd because they don’t recognize each other when they don’t have their hair anymore. I feel like it’s similar with people. It’s unbelievable how quickly you can transform your appearance with just the wrong cut or putting in highlights. People notice — women who are concerned about their roots, for example. The thing in Hollywood right now is that a lot of the starlets are going gray and people are wondering if this is okay in the workplace, and the majority of women are not comfortable being gray. It shows that women of a certain age are seen as too old and not current.

How do you deal with the people whose hair you are styling?

At the Institute, they give us a blueprint, called “guest concerns,” and that’s what you do for the first five minutes of the presentation. You know, ‘How would you like your hair styled?’

They give us a ticket that has on it what the guest is scheduled for and we’ll ask them about what they want.

What have you learned from studying hairstyling?

It is a much harder profession than people give it credit for. There is a lot of geometry involved with haircuts, which is why I tend to prefer coloring over haircutting. Like what I was telling you: do you want a more rounded shape over the head or do you want it more square?  Because the head is round it is easier to put a round shape over a round head than to put a square shape on a round head.

It’s so hard to deal with customer service. People can be so unbelievably difficult. You are constantly trying to prove yourself to them and yourself. You have to be able to easily adapt to certain situations — some people want to talk to the hairstylists, some people just want to be able to relax. Usually, the hairstylist starts the conversation, ‘Oh, do you live far from here? What brought you in?’

Mostly, I haven’t had too many bad experiences. When I work with people I usually end up talking to them anyways. I think that’s where my education at New College has come in handy. A lot of people ask me what I’ve done beforehand — especially when people try to cop an attitude with me. I just say I’m from New College of Florida and … it does get a certain level of respect.

As a hairstylist, you routinely encounter your clients on fairly intimate terms. How do you feel about this?

I found this book …  about the psychology of hairdressing. I thought it was religious or something like that. But, it actually ended up phrasing some things that you usually wouldn’t think about, but it’s stuff that you just inherently know. It’s the power that you have [as a hairstylist] over people making decisions. You are almost like a psychologist listening to what people are going through, what’s bothering them, what’s going on with their lives.

What are the greatest challenges facing hairstylists?

Inconsideration for their well-being — it’s hard on the body. I don’t feel like people really understand that. Sometimes people will wait for a long time and say, ‘My appointment was X amount of time ago.’  I understand that, but [the previous customer] is new and has massive hair. … That’s happened to me a few times and it’s just like, I’m so sorry, I’ve run into massive hair.

I think it’s just about being able to connect with people. For instance, I got so sick of the modern music that they play in the salon that lately I’ve just started listening to NPR. I’ve always been an NPR fan. … That opens up to a lot of interesting discussions.

[Pursuing a career in cosmetology] was a good decision, as much as I freak out about it all the time. I do think my New College education definitely has helped me with it — just knowing how to talk to different people. New College makes you very responsible for going after what you want to do.

Strischek wrote her thesis on Marilyn Monroe and pop art. When she graduates from the Aveda Institute, she will be promoted to assistant manager at Aveda’s Hollywood, FL location.