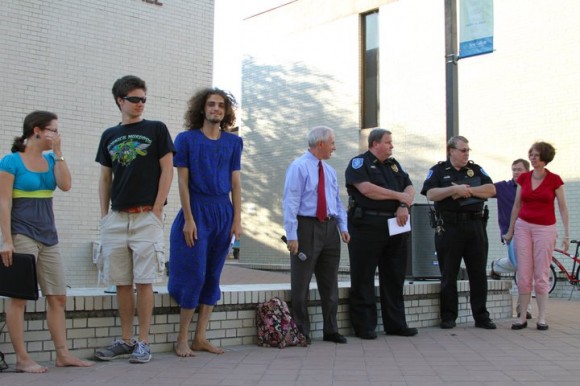 The issuance of guest passes and of Written Trespass Warnings (WTWs) have become controversial issues among students this semester. The Catalyst has engaged in a lengthy investigation of this controversy, of the trespasses and guest passes issued during the first module of this semester, and of the the possible future of guest policy at New College.

New College’s current guest policy dates back to Nov. 15 2007. It was created by the New College Student Alliance (NCSA) and then made official policy by the Board of Trustees.

At the Towne Meeting of Oct. 6, Dean of Student Affairs Wendy Bashant explained that NCF General Counsel Steve Pfeiffer also played a role in its creation, assessing the implications for the school’s insurance liability of various drafts of the policy.

Since that time, it has stipulated that non-students invited onto campus by students must have a four-day guest pass on them whenever they are not in the presence of their “student sponsor.” Those who are found not to possess one may be issued a trespass warning by the Campus Police Department (CPD).

A trespass warning is not a tool created to enforce the guest policy. They are used throughout the United States to discourage individuals from returning to a location without resort to legal action against them. They are also commonly issued as part of a legal action; when someone is charged with a crime and suspected of trespassing during it, they are often given this warning not to trespass again at the scene of the crime.

In an interview with the Catalyst, Lieutenant Michael Kessie of the CPD emphasized that some of the trespasses they issue, both here at NCF and on the University of South Florida Sarasota-Manatee (USF/SM) campus, are connected to criminal violations. For instance, the last two people to receive WTWs during the first module were a pair of unaffiliated high school aged boys suspected of committing many of the bike thefts that have recently occurred.

Kessie also emphasized that the word ‘non-affiliate’ is not “meant to be a derogatory term.” He provided the example of a “traffic crash out on 41, in front of the college.” “What we do is: when it happens we send the daily report out, or it’s in our records, and we say, ‘Traffic crash between two non-affiliated people.’ The reason why that’s done is that if it was a student we’d want Student Affairs to be aware of it.” The same goes for faculty and staff and any college departments that might be affected by their absence, hospitalization or what-have-you.

One module’s events in trespassing

The Cop Shop issued 17 WTWs on the New College campus between the first weekend of Orientation Week and the beginning of Fall Break. Five of those trespass warnings were issued to alumnae: Isaac Liu (’03), Brian Lee Bonfonti (’00), David Dayan (’06), Anna Folkers (’06) and Preston Bebas (’06), in chronological order. These are all New College graduates and will therefore be considered alumnae by any definition the NCSA and Board of Trustees choose to adopt. No alumnae have been trespassed since Orientation Week. One individual discovered drinking in his car near the bay on Oct. 1 did claim to be an alumnus, but Vice President of Alumnae Affairs Jessica Rogers could find no evidence of this.

Of the 17 WTWs issued thus far this semester, only two have publicly been lifted: Liu’s and that of an unaffiliated individual he was playing tennis with. As the Catalyst reported in its Sept. 5 issue, Professor of Economics and Faculty Chair Richard Coe spoke on Liu’s behalf, pointing out that he was a longstanding player on the New College Bones softball team. The future of Bonfonti’s trespass has been decided by Vice President of Finance and Administration John Martin, but he respectfully declined to provide this information to the Catalyst, pointing out that it is Bonfonti’s business with whom he chooses to discuss this matter.

Only one individual formally invited onto campus as part of an NCSA-sponsored event has been trespassed this semester. Non-affiliate Malcolm Lauredo was trespassed, under suspicion of drinking underage, the night before he was scheduled to play drums in the band Kit Fisto at thesis-student David Baker’s Music on Z Green event. He was in the company of second-year Elliot Evins when the CPD began to approach him, but they allege that all students accompanying him “ran upon police arrival.” His appeal is pending, with Evins currently encouraging him to pursue it.

While a few of the people issued the remaining 11 WTWs were either invited onto campus by students, or in the company of a student at some point during their interaction with CPD officers, most were discovered alone on campus drinking, sleeping or committing dangerous actions such as bypassing the new fence on the College Hall dock.

During the last few weeks of the module, a change in guest pass protocol also took place. The Cop Shop began issuing one-day only guest passes during the week, restricting its four-day guest pass issuance to Fridays. It also issued guest passes throughout the weekend that were good until that weekend’s end, regardless of the day on which they were obtained. Kessie explained during the Oct. 6 Towne Meeting, and reiterated in an interview with the Catalyst, that this was meant to further prohibit nonaffiliates from living on campus in defiance of the school’s housing contract. He also emphasized in both conversations that four-day passes are still available from Monday though Friday, 9 am to 5 pm, in the Student Affairs office.

Kessie explained that the CPD issues guest passes after hours and on weekends in order to encourage students to obtain them, pointing out that they had issued 145 guest passes during the month of September, “the highest we’ve ever had.” As he put it, “we don’t want to make it so difficult to get them that you guys don’t come and get them . . . so if it makes it easier to make it four days or five days or whatever, I’m for that. The idea is to make it easier, not to make more red tape.”

At the Towne Meeting, Kessie stated that the Cop Shop does not send emails to the students list-serve unless they contain “a security alert: something’s happened on campus that we need to make you aware of.” For this reason, the CPD currently plans to email any future changes in protocol to NCSA President Chelsea Dye for distribution to the student body.

As previously reported in the Catalyst, a proposed amendment to the Student Bill of Rights guaranteeing guest rights is under consideration by the Constitutional Review Committee. Vice President of Student Affairs Jordan Martin also chairs an “Ad-Hoc Guest Policy Committee” tasked with drafting a new and more comprehensive version of the 2007 policy. Students are encouraged to attend any of these bodies’ meetings, which are not held regularly but are announced in advance via the students list-serve.

The definition of an alumnus is likely to be an important piece of these initiatives. Any individual who has been accepted by Admissions and enrolled at New College has traditionally been considered an alumnus, regardless of whether or not they satisfied even a single contract. Even if graduates become the only former students referred to as alumnae, the question of how much to extend them the rights and privileges of current students will remain central.

Kessie, Martin and Bashant were questioned by the Catalyst as to their feelings on this specific issue. All three answered that the matter should be left up to the New College Alumnae Association (NCAA), the students, the Board of Trustees and others to decide by the usual methods. Kessie stated that he was confident the CPD would “be consulted, and we’d have our input into” any potential new policy.

Bashant echoed that the CPD’s “concerns” should be voiced, along with those of others, and stated, “I don’t have anywhere near enough information to know what the repercussions of that would be, as well as the benefits.” She added, “My staffing levels are very low and to have them be focused on anything other than the people who are paying our salary feels, to me, wrong.”

Martin responded, “You know, I don’t know . . . just like the NCSA are the elected representatives of current students, well, the NCAA are the elected representatives of alums . . . My knee jerk opinion is: they shouldn’t have the same kind of status that current students have . . . my opinion is that but I can be convinced differently. I’d like to hear the discussions, the pros and cons . . . from our current students, and the pros and cons from the NCAA leadership as well. You know, they need to have a stake in this discussion.”