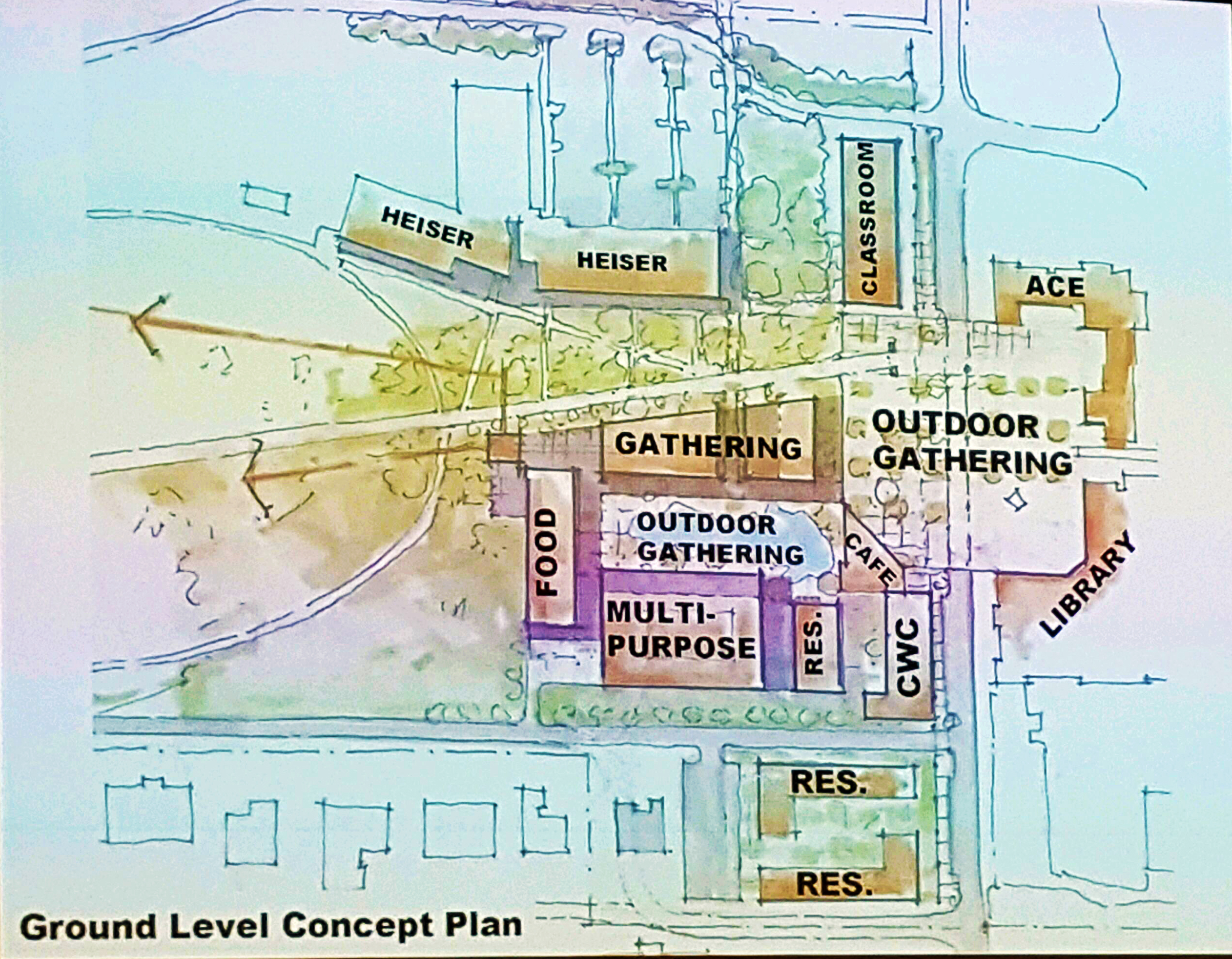 New College is in the midst of a transformative era with the four-day long (Apr. 3 to 6) Growth Planning Charrette finished and the Sweet Sparkman Architects design team delivering creative ideas for impactful improvements on campus. All of this is tentative until a final decision is released by the Board of Governors’ Budget and Finance Committee whether the over $70 million will be granted to fund the large scale project.

The charrette was meant to investigate the desires the New College community had for alterations of the campus. In architectural education, a charrette occurs when a group of students are given a challenging task to complete in a short time. Groups usually pull all-nighters and work intensively until the task is done. That’s just what Jerry Sparkman and the rest of the design team did to have a clear illustrative mapping of future endeavors.

“The idea of this process is that we will end up with a pretty clear idea of what the construction might be,” Professor of Sociology and Environmental Studies David Brain said after the first charrette on Apr. 3. “So, if we get the funding, then we’ll kick into gear and do the next step” of finding the right contractors and workers to finally start sticking shovels in the ground.

The design team mainly concentrated on community feedback and was most interested in fulfilling needs expressed by participating students, faculty and staff. They focused on gathering and assembly areas, food service, multi-purpose recreation, student organization spaces and more.

The most popular idea at the first brainstorming meeting was a sort of multi-purpose assembly and gathering area. From graduations that could house up to 1,500 people to having more food service options and more student-use space, the proposed facility may be built where the Counseling and Wellness Center (CWC) and the Palmer buildings stand currently.

The location was strategically chosen to be in the center of campus between the east side (residential side where Hamilton Center is) and the west side (Bayfront) of campus. Being ten times the size of the Harry Sudakoff Lecture and Conference Center, the massive structure would be two stories tall, utilizing the ground level for more student functions such as casual gathering space and another cafe (so that there isn’t just the Four Winds on the west side of campus) and the second level for more administrative and support purposes.

“The design of a large complex to replace the Palmer buildings is really innovative. Especially the way they want to go with it,” second-year James Nuñez said at the final Pin-Up held on Apr. 6. “I think they’re [the proposed designs] very creative. I came in expecting a little more traditional designs.”

The complex would include outdoor gathering space that may include a water feature and vegetation to provide shade. The design team was persistent proposed a wider overreaching top floor to provide efficient shade for the outside ground level as well.

The most recent addition to campus found between the Academic Center (ACE) and the Jane Bancroft Library would be expanded and paved over Bay Shore Road. The historical fence (if allowable) would be removed or pushed back to allow for a larger pedestrian oriented space that allows for easier accessibility. By adding tables, seating and shade to the expanded plaza this creates yet another outdoor gathering and assembly before passing under the Dort Promenade arc.

Bay Shore Road could be blocked and cars would use other roads like 58th Street to traverse the campus and go the long way around on the west side. If not, then there may be an elevation on the street so that cars would have to slow down nonetheless in that crosswalk section of the road.

Additional residential space would be added just behind the aforementioned multi-purpose facility. The school may acquire land which would create significantly more room for housing to the west side of campus. Unfortunately, B-Dorm could be gone, so this is an attempt at replenishing those lost spaces and going beyond what once was.

As part of the master plan for the project that is in the works, next to the latest addition to the Heiser Natural Sciences Complex would be yet another academic structure built where the current faculty parking lot that is directly across from ACE.

An understandable concern for the New College master plan would be: “Then what about parking?” If we would truly have a massive multi-purpose complex, with a substantial amount of added housing, plus another building the size of the new Heiser building that is being built now (taking up the existing parking lot there), then how can we possibly have people getting to all of this?

Sparkman noted that just north of where the ACE parking is currently located there is a considerable amount of land perfect for parking. Although it is not known how many cars would be able to park in that land and if the proportions are appropriate for all of the tentative development being conceptualized for the time being.

“The one thing I think could’ve been focused on more was parking,” second-year Iyanu Corniel wrote in an e-mail interview. “It seemed that even though we will be accommodating more students, additional parking areas seemed like somewhat of an afterthought.”

Another major idea proposed was the addition of more tiki huts by the Bonseigneur House and a fire pit installed nearby. The pit is meant for students to spend time in that far end of campus. Simply using the space we have more effectively so that overall there can be more opportunities for activities on campus in general.

Lastly, taking advantage of the incredible view of the Sarasota Bay we have accessible on our campus, the design team thought of building a small structure near College Hall that would serve as a sort of auditorium style classroom with glass screens that allows for a grandiose view of the nature right outside.

“It’s the simple notion of a porch at the Bay, but for educational purposes and gathering,” Sparkman said at the final meeting on Apr. 6.

According to the original illustrations it seems that the students would be getting the fantastical view. This is unfortunate for that one faculty member that would be the only one with their back turned to the bay.

“I was actually impressed by the conceptual level of each of the tables [groups that brainstormed in first meeting],” Brain said. “There were just a ton of great ideas that came out that gave the designers a lot to work with.”

All in all, the process was a success and all those who participated generally feel like progress was made. It was a healthy learning experiences for everyone involved and recommended by the group of architects that New College attempt large scale changes like this to be run in a similar manner due to the constructive nature of the methodology.