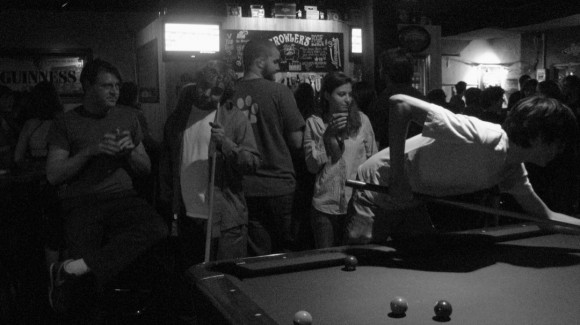 A few pubgoers enjoy a round of pool while “It’s Always Sunny” fans range against the bar in the background, close to the flatscreen televisions.

Fans of the hit television series It’s Always Sunny in Philadelphia can double their fun out at Growler’s Pub –– provided they are 21, of course. The beer bar on the north Tamiami Trail hosts screenings of the show when it airs on FX every Thursday night at 10 p.m. The series is now running its sixth season, which premiered on Sept. 16, and what used to be a rather quiet Thursday night at Growler’s has exploded into quite the party night. Students from New College and Ringling regularly come on Thursday nights to rub shoulders with a boisterous crowd of other It’s Always Sunny enthusiasts.

“[Sarasota] isn’t exactly a party town,” one Growler’s bartender told the Catalyst, “so sometimes we’ll have 300 people in here on a weekend; another weekend it’ll be 25. It’s really a crapshoot.” Nevertheless, he said the Thursday night crowd piles in steadily in numbers considerably higher than an average weeknight’s.

Sarasota resident Tommy Connell has been watching the show since it debuted in 2005. He had never been to Growler’s until he found out he could watch “The Gang’s” hilarious misadventures and simultaneously enjoy a cold craft brew with a crowd of buddies.

“It’s just like –– watch these con artists suck at life,” he said of the show.

Although New College students screen the show on campus from time to time, a short trip down the Trail comes with its perks. Only biking distance from campus, Growler’s offers drink specials and free food at the event. The show only lasts a half hour, perfect for a study break or just a quick jaunt outside the New College “bubble.”

“I always come [to Growler’s] on Thursday nights,” thesis student Sarah Gregory said. “There’s good beer and all the New College kids are hanging out.” Gregory said she doesn’t even follow the show, but just enjoys the phenomenon of seeing a regular crowd of New College kids kicking up their heels off-campus.