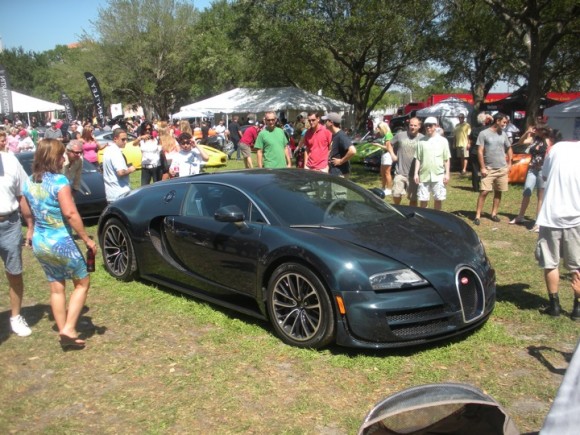 The Bugatti Veyron Super Sort was the center of attention, with event attendees crowding around to photograph every detail of the car, down to the pattern of its tire treads.

I arrived in St. Petersburg last Sunday, the sunny streets flooded with a river of people migrating towards a small park behind the Museum of Fine Arts. To avoid paying $20 dollars for parking, I walked the half-mile between where I left my car, a fuel-efficient diesel, manual transmission Volkswagen Beetle, to Vinoy Park. This waterfront park with meandering sidewalks and shaded with ancient oak trees was the destination for hundreds of visitors to St. Pete that day.

On my way, I took notice of a much smaller crowd gathered in a parking lot. Signs informed me that the pop-tents and Toyota Prius in the lot formed part of Tampa Bay’s Living Green Expo. This Expo promised to “provide real solutions for people to live better, healthier lives with less impact on the environment,” and as an added bonus, charged nothing for admission or parking. A few people mulled around checking out one of the companies demonstrating home solar panels, as another nearby booth hailed the health and environmental benefits of commuting by bicycle.

But the crowd that I flowed with wasn’t interested in learning about environmental landscaping or public transit. We continued our march to Vinoy Park, home of St. Petersburg’s Festival of Speed.

Half of the park was crowded with refurbished antique cars, a few motorcycles and some very large speed boats. Next to a large tent filled with Rolls-Royce and Bentley luxury sedans, at least two-dozen Ferraris and Lamborghinis formed a circle around the other half the park. In the center of this ring was parked the pièce de résistance: a Bugatti Veyron Super Sport.

This is currently the most expensive production car on the planet, cashing in at $2,600,000. Not only is it the priciest, it’s also the fastest. It tops out at 267 miles per hour, thanks to its 16-cylinder engine capable of cranking out more than 1,200 horsepower. It gets about eight miles to the gallon, but at top speed, that number drops to around three. It can suck up a gallon and a half of gas in a single minute.

But it’s flashy. It’s sexy. It’s powerful. People held their breath and whispered excitedly, awed to be in the presence of such a powerful beast. They admired the exhaust pipe, the tire treads and took notice of the detailed stitching on the steering wheel. A gruff man with a foot-long goatee was hired to ensure no grubby fingers made it close to touching the high-gloss carbon fiber. Based on the swarm crowding around to get their picture with the Super Sport, it appealed to more people than the Prius down the street at the Green Expo.

The environmental movement needs its own Bugatti Veyron Super Sport. Not an actual gas-guzzling sports car, but something with pizazz. Something that will make jaws drop. Something that will appeal to the average American and isn’t a fancy light bulb or a low-pressure showerhead. Until the environmental movement is just as flashy, sexy and powerful, it’s going to be hard to convert the Festival of Speed’s Veyron lovers to Green Expo Prius fanatics.